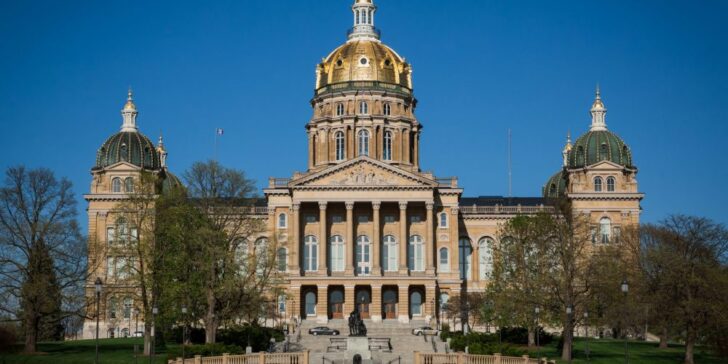 Keeping your economy open, conservative spending, and lowering tax rates. This is the economic formula that is building a solid fiscal foundation for Iowa. It is also the formula that 53.7% of Iowans support. A majority of Iowans, 59%, also support continued tax relief. This is the direct opposite of the tax and spend “shifting sand” agenda that creates a weak foundation that quickly erodes. The Revenue Estimating Conference (REC), which has the difficult task of forecasting revenue, estimated that revenues will increase for both Fiscal Years 2022 and 2023. The REC is estimating $8.934 billion in revenue for FY 2022 and $9.075 billion for FY 2023.

The healthy revenue outlook is on top of the FY 2021 General Fund budget surplus of $1.24 billion. Critics of Gov. Kim Reynolds argue that credit for Iowa’s strong and stable fiscal house belong to the massive amounts of federal stimulus spending. However, this argument does not hold water. Iowa’s fiscal house is on a strong foundation because of following fiscal conservative policies.

At this time, Iowa has received over $9 billion in federal stimulus dollars. Gov. Reynolds has used these federal funds for a variety of purposes including pandemic relief, broadband, and most importantly replenishing Iowa’s unemployment trust fund. However, the legislature has been careful not to budget for these funds. Iowa’s budget surplus is not a result of massive federal stimulus spending, but rather by Gov. Reynolds and the Republican-controlled legislature following prudent budgeting.

Iowa’s unemployment remains, and has remained low, and the second quarter saw Iowa’s Gross Domestic Product (GDP) grow by 7.7%, which was one of the highest in the nation. Iowa’s economy is recovering and a big reason for this is keeping the economy open and following fiscal conservatism. Strong commodity prices have also helped the economy. If federal stimulus were the key to economic growth, then we would see our neighbors in Illinois and other progressive “Blue” states in better fiscal shape.

Prior to the pandemic, Iowa’s fiscal house was in strong order and heading into the 2020 legislative session the budget was running a $305 million surplus. Truth in Accounting in their Financial State of the States 2021 report ranks Iowa in the top 10 (9 out of 50) of fiscally stable states. Heading into the 2022 legislative session, lawmakers will not only have a $1.24 billion surplus, but the reserves are full, including $1.054 billion in the Taxpayer Relief fund.

With a massive surplus and stability in revenue, Gov. Reynolds and Republican legislative leaders are rightly making tax reform a priority in 2022. Since 2018, tax reform has been a priority and Gov. Reynolds clearly understands that to grow Iowa’s economy and make it more competitive, our high tax rates must be lowered.

The $1.24 billion surplus, along with the REC estimate, creates a pathway for further tax relief. During the past legislative session, the legislature repealed the 2018 income tax triggers, which will allow the individual income tax rate to fall to 6.5% in 2023. The repeal of the triggers was part of a larger tax relief bill that the legislature passed.

With a top individual income tax rate of 6.5% and a top corporate rate of 9.8%, Iowa still has high rates. Numerous states are in the process of lowering both their individual and corporate income tax rates. An economic challenge for Iowa is the need for workers and to grow our population. One important lesson from the Census numbers is that low tax states are gaining population, while high tax states are experiencing a mass exodus. If Iowa wants to remain economically competitive, it must lower tax rates.

In 2022, legislators will have an opportunity to enact serious tax reform. Policymakers should ensure that tax reform benefits all Iowans and not a specific socio-economic class. Gov. Reynolds has stated that her ultimate objective would be to eliminate the income tax. Senate Majority Leader Jack Whitver has echoed the governor in calling for a pathway to eliminate the state income tax.

This is a positive policy goal, but it will take time to occur. Navigating tax reform is not an easy task, but lawmakers can use several policy tools to lower rates. Perhaps the best way to lower rates is to use triggers. Several states have used triggers to lower both individual and corporate tax rates. What is important about triggers is to ensure that they do not serve as obstacles for tax reform. The 2018 triggers are a perfect example, especially the 4% growth requirement. A trigger should serve as a guide, rather than a roadblock to tax rate reduction.

Tax rates can also be gradually reduced as Indiana has done over recent years. Regardless of the pathway to rate reduction, the important point is to make sure that spending is controlled. Iowa can look to no-income tax states such as Florida and Texas and see their economic growth, or other states such as Utah, North Carolina, and Indiana who have successfully lowered their income tax rates to create a pro-growth environment. Eliminating the income tax is a good policy goal, but a pro-growth tax climate can be achieved with a low-income tax rate.

The real danger for future tax relief in Iowa comes from the tax-and-spend policies originating from the federal government. President Joe Biden’s “Build Back Better” agenda and its trillions in new spending is not only causing inflation, but also the proposed tax increases threaten to destroy the economic recovery. Inflation is the cruelest tax, and it is a hidden tax that eats away wages and savings.

The budget surplus and strong revenue forecast provide an open door for significant tax reform in 2022.

Iowa taxpayers, who have suffered through the pandemic and numerous devastating weather storms, deserve tax relief. Keeping your economy open, conservative spending, and lowering tax rates is working for Iowa and it has created a solid fiscal foundation for future growth.