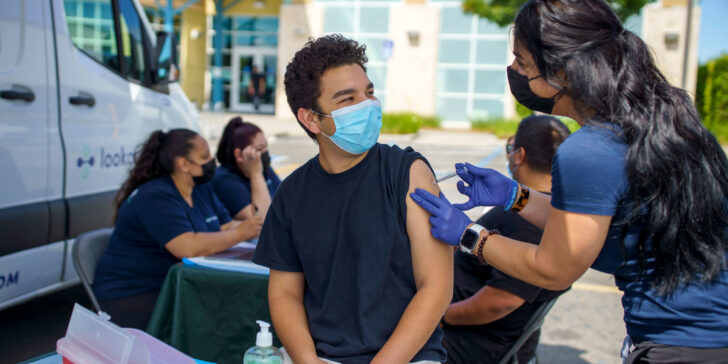 Deadlines for teachers and other school staff to get vaccinated have come and gone in a number of the country’s largest school districts. But with a few exceptions, including New York City and Los Angeles, most have put off enforcement or watered down their vaccine mandates to the point that the shots no longer appear mandatory, a Chalkbeat review found.

The dearth of meaningful mandates highlights the difficulty school districts have had trying to get employees vaccinated while balancing staff shortages and political opposition. Unvaccinated staff also represent an increased risk of continued disruptions to schooling.

“People need to get vaccinated,” said Jana Shaw, a professor of pediatrics at Upstate University Hospital. “As long as they remain unvaccinated, they will continue to spread the virus and we will continue to see staff out, children getting infected, missing school.”

A survey of 100 large school districts by the Center on Reinventing Public Education, a University of Washington think tank, found that only 15 school districts say they have mandated the vaccine for school staff.

But in practice, vaccine requirements are even rarer than that.

Chicago, for instance, had announced that the deadline for full vaccination was Oct. 15. But days before, the district said it would allow unvaccinated staffers to remain in schools and opt for regular testing.

Strict enforcement would “leave schools dangerously understaffed, and disproportionately impact employees of color within CPS,” the Chicago Teachers Union, which had initially backed the mandate, wrote in a letter to Chicago’s mayor arguing against a strict mandate. Eleven percent of staff remain unvaccinated, according to the latest district numbers.

Similarly, in Denver, when the Oct. 1 deadline to be vaccinated arrived, some 13% of school staff still had not gotten the shot, most without exemptions. They might be terminated in January, the district warned, but for now, they can continue working.

A district spokesperson said that the timeline “is intended to help ensure we don’t experience any staffing shortages that would affect the services we provide to our students and families.”

In Montgomery County, Maryland, the original vaccine deadline of Oct. 29 was extended to the middle of November. Twelve percent of staff there remain unvaccinated, the district said last month.

In San Antonio, the Texas Supreme Court halted the district’s mandate last month amid a legal dispute with the governor. The district recently said that about one in five staff members have not provided proof of vaccination.

Washington D.C.’s deadline was Monday, but a local news report indicates that more than 20% of school staff are unvaccinated. The district said that those staffers would remain employed but could face five-day suspensions.

The school board in Clark County, Nevada — home of the country’s fifth largest school district, which includes Las Vegas — held a contentious hearing in September before voting to pursue a staff mandate. But local news outlets reported last month that the idea had stalled — and that nearly one-third of staff had not provided proof of vaccination.

Oregon and Washington have implemented statewide vaccine mandates for school staff, without the opportunity to test instead. But both have seen high numbers get exemptions in many areas. In some Oregon districts, 20% of staff received exemptions. In Washington, 10% of all school staff received an exemption, typically a religious one.

The reluctance to vigorously implement vaccine mandates may reflect the school staffing shortages that have rippled across the country, as well as pushback from the minority of staff who oppose the requirements.

“Districts may just be doing the calculation that getting 10 to 20%, let’s say, more staff vaccinations may not be worth the short-term costs of impacts on staffing and any kind of political blowback,” said Bree Dusseault, an analyst at CRPE.

Perhaps it’s not surprising then that most large districts have not pursued a vaccine rule of any sort, according to CRPE’s data. A number of states prohibit such mandates. Policymakers in those states — and school staff who oppose mandates — say it’s a question of fundamental rights.

“Getting it is a personal choice, and we will not allow discrimination based on vaccination status,” said Arizona Gov. Doug Ducey.

Another 28 of the largest districts say that teachers have a choice: they can either get the vaccine or submit to regular testing. Several states, including California and New Jersey, have adopted this rule for all public schools.

However, experts say that this frequent testing — which can only identify the disease after it’s been contracted — is not equivalent to the vaccine, which reduces one’s likelihood of infection in the first place. Testing rules also require regular enforcement by school officials, which may prove challenging.

“Once you get staff vaccinated, you don’t have to be doing daily work implementing or maintaining that policy,” said Dusseault.

Places that have stuck with a strict mandate have had success in getting vaccine figures up.

In the country’s largest school district, New York City, 95% of school staff received at least one dose by the early October deadline, with thousands getting a shot leading up to the mandate. Staff who remained unvaccinated and lacked an exemption were placed on unpaid leave.

Similarly, the mid-October deadline in Los Angeles prompted a flurry of jabs, and the district recently reported a 95% rate of at least one shot. “I held out as long as I could,” one teacher, who reluctantly got the vaccine, told the Los Angeles Times. “I’m also pragmatic enough to not throw away 21 years toward retirement.”

Unvaccinated staff are barred from campus and stand to lose their jobs or already have, the Times reported.

Portland, St. Louis, and Seattle also appear to have stuck with a strict mandate and have seen high vaccination rates.

Public health experts say this aligns with experience in other sectors. Vaccine mandates can be effective, they say, but only if they are actually enforced.

“If you allow this grace period for COVID-19 mandates and the grace period is not well defined and there are no consequences for not following through, then of course you will not have people vaccinated,” said Shaw.

Meanwhile, school districts are starting to grapple with a separate vaccine mandate question: whether they should be required for students. On Tuesday, The Centers for Disease Control and Prevention greenlit the Pfizer vaccine for children aged 5 to 11, allowing shots to begin this week.

This article was originally posted on Delayed, diluted, or nonexistent; Vaccine mandates for school staff stall out