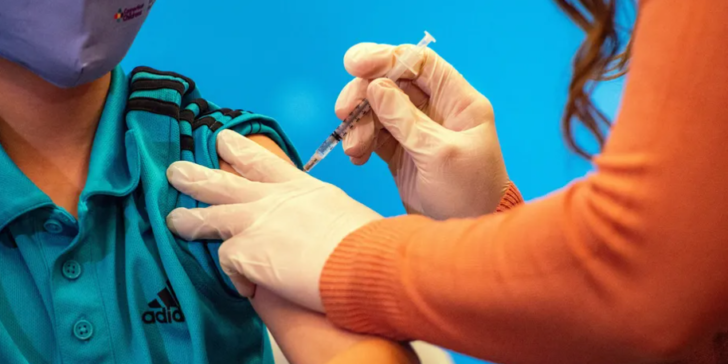 The Pfizer vaccine will be available at 1,070 school sites during school hours starting Nov. 8, de Blasio said. Schools will require parents or guardians to accompany their children. If they cannot, another adult must go with the child and then call the parent or guardian in order to provide verbal consent for the vaccinations. After this story initially published, an education department spokesperson said parents can also fill out written consent forms, which must be sent with the child and the accompanying adult.

The plan to administer the shots at elementary schools follows a highly anticipated, emergency clearance from federal health officials on the Pfizer vaccine for younger children. As the United States neared approval, the school system’s role in vaccination had become a big question.

In clinical trials, the Pfizer shot was found to be 91% effective at preventing COVID in children — similar to effectiveness in adults, according to the U.S. Centers for Disease Control and Prevention. Similar to those in adults, side effects were “mild,” and include fatigue or flu-like symptoms. Such side effects are similar to other vaccines that children receive, according to federal health officials. The most common side effect was a sore arm, the CDC said in a statement.

The dose contains one-third the amount given to adults and older children. Children are supposed to receive two shots, administered three weeks apart. Staff at the school clinics will help families set up appointments for second doses at other locations.

While school may be an easy place for families to turn to, some doctors previously told Chalkbeat that they believe most of the vaccine uptake will be through a trusted pediatrician. De Blasio also acknowledged that some parents will prefer going to their child’s doctor or a city clinic, which will begin providing the newly approved shots Thursday.

“All choices are good choices, but we want to make it available and easy for parents who prefer just to go to their local school building,” de Blasio told reporters.

School-based staffers must be vaccinated, but de Blasio doubled down on refusing to mandate COVID shots for students, noting that he doesn’t want students to be discouraged from attending school. That’s against the advice of New York’s chapter of the American Academy of Pediatrics, which last month called for mandating the shots once they receive full approval. (So far, only Pfizer vaccines for ages 16 and older have received full federal approval).

COVID vaccination at schools is not unprecedented in New York City. Schools offered vaccines to students ages 12 and older the first week of school in September and returned three weeks later to provide second doses. As of Wednesday, 78% of city children ages 12-17 had received at least one dose, according to a news release from the education department.

This school year to date, 4,950 students — or roughly .5% of the city’s school population — have tested positive for COVID, according to the education department. In that time period, nearly 2,000 classrooms have been fully closed for quarantines, while just over 3,100 classrooms have seen partial closures.