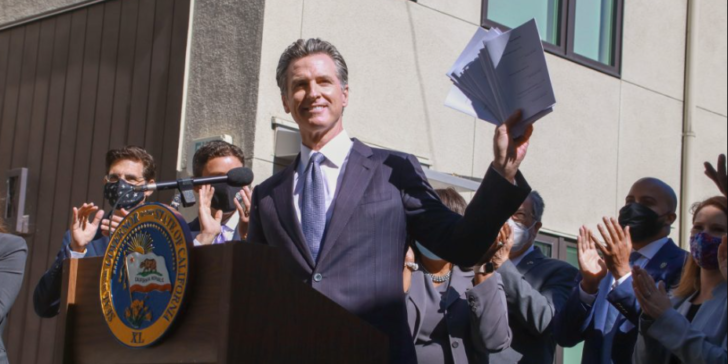 Speaking from Golden Gate Park in San Francisco, Newsom and Ardern highlighted the impact that climate change has had on both California and New Zealand. In California, Newsom pointed to longer fire seasons and prolonged droughts, while Arden noted recent extreme weather events on New Zealand’s eastern coastline.

To combat these impacts in the Golden State and the Pacific nation, the leaders signed a memorandum of cooperation on Friday that represents a shared commitment to exchange information on the best ways to reduce greenhouse gas emissions, transition to electric vehicles and achieve carbon neutrality.

New Zealand is one of a handful of countries bound by law to reach a goal of zero net emissions by 2050. Ardern explained Friday that while New Zealand has “long been known as a nation that is clean and green,” there is more work to be done, particularly in the country’s transportation sector.

Ardern explained that by 2035, New Zealand wants to have 30% of its vehicles be electric, but reaching that goal will require sourcing. The prime minister indicated that she and Newsom discussed potential partnerships they could form to overcome EV supply chain issues.

California is also working on a plan to phase out gas-powered vehicles, setting rules in place to mandate that 100% of new cars sold in California be zero-emission by 2035. The state is also aiming to achieve carbon neutrality by 2045.

Newsom said he doesn’t know how many nations have a budget that large, “let alone climate budgets that have ever come close to the investments we’re making.”

“Later is too late to address climate change, and California is taking aggressive steps to bolster the clean economy while reducing pollution in our communities – but we can’t do it alone,” Newsom said in a statement. “This partnership with New Zealand, another global climate leader, will strengthen ties between our two governments to deploy critical solutions that are essential to addressing this existential crisis.”