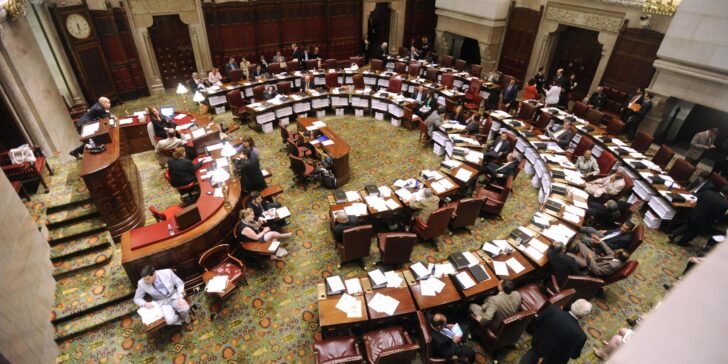 The legislation allows school boards to approve 14-day mandates on a school-by-school basis if three conditions are met: the governor has declared a COVID-specific state of emergency; the county has had a rolling infection rate of at least 1,000 cases for every 100,000 citizens over 14 days; and the principal has requested universal masking.

Private schools are exempt from the restrictions under the measure, which passed 22-4 in the Senate and 58-22 in the House. The legislation would become law with Republican Gov. Bill Lee’s signature and likely will be challenged in court.

The action is the GOP-controlled legislature’s response to about a dozen public school districts that required face coverings this fall as COVID counts peaked, even as Republican House Speaker Cameron Sexton warned them to make masks optional or face legislative action.

When some districts stuck with universal masking, Sexton rallied fellow Republicans to convene in special session this week. The goal was to address local and federal policies that the GOP deemed an assault on the personal liberties of Tennesseans who prefer not to wear masks or get vaccinated. Masking students should be left up to their parents, Sexton said.

Lawmakers sought to prohibit businesses, schools, and governmental entities from requiring proof of vaccination for their employees or customers and workers — and to ensure that anyone who loses their job over vaccinations can receive unemployment.

But they retreated from blocking mask mandates for private businesses after business leaders pushed back about being squeezed by conflicting state and federal directives. One complaint came from Ford Motor Co., which recently announced plans to bring a $5.6 billion plant and 5,800 new jobs to West Tennessee to manufacture electric pickup trucks.

Senate Minority Leader Jeff Yarbro pointed out the inconsistencies on which entities get to keep mask mandates.

The bill also allows public universities to require masks and vaccines if they convince the state comptroller that federal funding would be lost by not doing so.

They removed the ability of six independent local health departments to issue their own orders during a pandemic. The six include health officials in Shelby County, whose directive in August led to mask mandates for suburban school districts near Memphis that had not planned to issue them.

“We’re looking at consolidation and consistency for extraordinary circumstances across our state,” said Republican Rep. Kevin Vaughan, whose Collierville district was affected.

The bill gives the state health commissioner sole authority to set guidelines for quarantines, which Republicans contend have been too expansive and need uniformity statewide across urban and rural areas during a pandemic. It also specifies a minor cannot get vaccinated for COVID without written consent from a parent or guardian.

Another measure allows school board races, which are nonpartisan contests in Tennessee, to attach Democratic or Republican labels to candidates on the ballot. Sponsors said voters need more information to select candidates that reflect their ideals, especially as hostility erupted this year at some school board meetings across Tennessee and the nation over hot-button issues such as mask mandates and how to teach students about racism.

Gov. Lee declined to call this week’s special session, citing his executive order allowing families to opt their students out of school mask mandates. The order is set to expire Nov. 5, but is blocked by federal judges in three counties.

The session, which opened on Wednesday, wrapped up early Saturday morning after Democrats had complained the GOP was rushing significant legislation without getting enough input from stakeholders.

Yarbro called the pace “reckless,” while others asked Wednesday for more time to review 80-plus bills, most of which were filed the day before the session began.

“This is not something done in haste,” Johnson insisted. “This is something that’s been in the works, really, since this pandemic began.”

The special session was Tennessee’s third this year but the first called by the legislature since 1982. Lee ordered lawmakers back to Nashville last week to approve a $900 million incentive package to secure the Ford project.