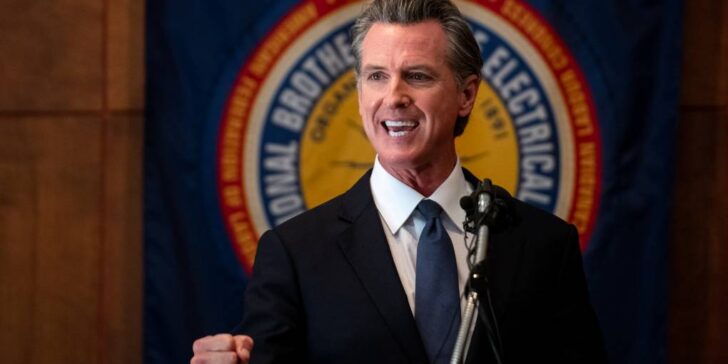 California could enact mandatory water restrictions to combat the current drought if conservation efforts at the local level do not result in significant statewide water reduction over the summer, Gov. Gavin Newsom warned Monday.

The warning came after the governor met with leaders from the state’s largest urban water suppliers Monday to urge them to take more aggressive measures to address the state’s drought and encourage their customers to participate in water conservation.

Last July, Newsom called on state residents to voluntarily slash water usage by 15%. The state has come up short on that goal, however, with water usage in March increasing by 19% compared to March 2020, the Associated Press reported.

California’s drought continues to rage. During a news conference in Los Angeles last week, state water officials said that California experienced the driest January, February and March on record, adding that there is growing evidence that this drought is a continuation of the previous drought in 2012-2015.

“Every water agency across the state needs to take more aggressive actions to communicate about the drought emergency and implement conservation measures,” Newsom said on Monday. “Californians made significant changes since the last drought but we have seen an uptick in water use, especially as we enter the summer months. We all have to be more thoughtful about how to make every drop count.”

During the state’s last drought in 2015, then-Gov. Jerry Brown ordered a mandatory 25% reduction in water use. Newsom, however, has veered away from introducing a sweeping “one size fits all” approach to water conservation and has instead favored keeping conservation mandates at the local level.

In March, an executive order signed by Newsom directed the State Water Resources Control Board to consider a ban on the irrigation of decorative grass outside of industrial and commercial buildings.

The governor also asked the board to consider an emergency regulation requiring urban water suppliers to move to Level 2 in their Water Shortage Contingency Plans, which implements conservation measures to prepare for a water shortage of up to 20%. Level 2 conservation actions typically include measures like limiting outdoor watering to certain days or hours and enforcing prohibitions on water use, though each water district sets its own regulations.

The water board is set to vote on Newsom’s requested measures during a meeting Tuesday. If adopted, the entire state will be under a “mandate of local mandates” related to water conservation by June 10, Newsom said during a press conference last week.

The state has taken steps to restrict water usage as the drought continues. In January, the State Water Resources Control Board adopted rules that restricted individuals from watering lawns within 48 hours after a rainstorm or allowing sprinklers to run onto the sidewalk, the Associated Press reported. Violates could face $500 fines.

While Newsom’s warning did not include a timeline of when Californians could see statewide restrictions go into effect, his office said the governor would reconvene leaders from the state’s urban water suppliers “in the next two months” for a progress report.