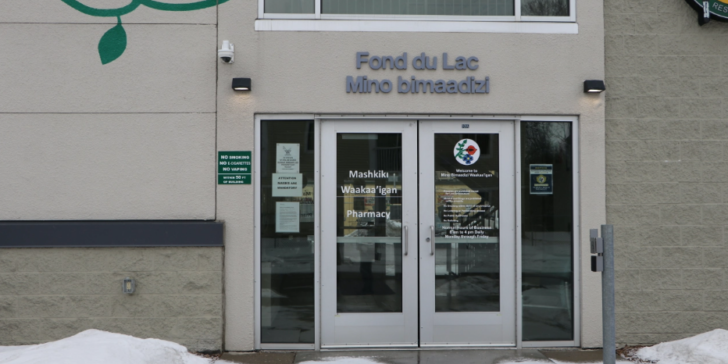 Tucked away on a side street near downtown, the Mashkiki Waakaa’igan Pharmacy offers its Native American clientele the services of any ordinary drugstore — it dispenses critical medication and provides consultation on treatments.

But there are two key differences: Every Mashkiki patient gets prescriptions for free — with no out-of-pocket expense — and can access care that’s conscious of cultural traditions.

Operated by the Fond du Lac Band of Lake Superior Chippewa, Mashkiki is a fully tribal-funded pharmacy for members of any federally recognized tribes living in the Minnesota counties of Hennepin and Ramsey, regardless of their insurance status. It has nearly 10,000 registered patients and about 3,500 active patients, and those numbers are growing. According to the 2020 census, Native Americans make up about 1% of the population in the two counties, which are home to Minneapolis and St. Paul.

When Mashkiki opened in 2007, pharmacist-in-charge Kellie Milich was filling as few as seven prescriptions a day. Today, she and the other pharmacists are dispensing 300 to 400 prescriptions daily.

The pharmacy asks all its customers to try to get prescription insurance. A staff member will help them apply for Medicaid if needed. However, if customers can’t access insurance, the pharmacy serves them using tribal funds derived from enterprises such as gaming. Money never changes hands, and there’s no cash on-site.

“We do try to bill insurance in order to keep the program running, but if an insurance company doesn’t cover a medication that a patient needs to be on, Fond du Lac has decided that the patient’s health is more important than the payment,” Milich said. “And so we just eat the cost of the medication.”

This model isn’t without challenges.

The pharmacy carries medications for most chronic conditions, but because of funding constraints, the pharmacy has a limited inventory of drugs. Milich said members of the 17-person staff reach out to providers to try to find substitutes for prescriptions they can’t fill and is expanding the number of medications Mashkiki offers almost every month.

“It’s a fine balance, you know,” said Samuel Moose, the human services division director at the Fond du Lac Band. “We have to try to keep the doors open and the lights on. But it’s something we’ve been very successful at.”

For more than 20 years, Moose has run tribal health care programs for Fond du Lac, which is part of the Chippewa tribe and has a reservation about a two-hour drive north of Minneapolis, near Duluth. Fond du Lac owns and operates two other pharmacies in other parts of the state. However, unlike Mashkiki, those two pharmacies use direct IHS funding.

The Indian Health Service — an agency within the U.S. Department of Health and Human Services — is responsible for providing care to Native Americans in more than 570 federally recognized tribes, but funding is limited, especially for those living away from reservations and in urban areas.

Most tribal members living in the Minneapolis area have difficulty securing prescription drugs through the IHS, as the nearest IHS facilities are all a couple of hundred miles from the city. However, urban Natives living in Minneapolis can receive care from the Indian Health Board of Minneapolis, an urban Indian health center that offers both medical and dental services — but doesn’t have a pharmacy.

Dr. Sheila Thorstenson, a dentist at the IHB, directs patients in need of prescription medicine to Mashkiki. “We’ve actually linked up a lot of people who weren’t even aware that that pharmacy existed to having now a pharmacy where they can go and get their medicines,” she said.

U.S. Sen. Tina Smith (D-Minn.), a member of the Senate Committee on Indian Affairs, noted that inadequate funding for Native Americans’ health services is a longtime problem. “It’s striking to understand the scope of the problem if, when you adjust for inflation, the Indian Health Service budget has been flat since 1983,” Smith said. “So the Indian Health Service spends less than $4,000 a year per user. That’s the lowest of any federal [health] program. For perspective, at the high end you have Medicare, which is $12,000 a year.”

Moose said Fond du Lac sought to help alleviate that disparity by funding the pharmacy. “We heard the stories,” he said about people forced to make tough choices to save money. “Chopping pills in half and trying to look at how they’re going to eliminate certain expenses within their lives to afford their medication.”

Potawatomi tribal elder Roger Deragon said that using the pharmacy has been a great benefit to tribal members with diabetes. “I think if it wasn’t for Mashkiki, I don’t believe a lot of our Native elders with diabetes would even be able to afford their insulin,” he said.

Mashkiki also provides culturally competent care. For example, Mashkiki offers a smoking cessation program that focuses on commercial tobacco while acknowledging that some people will want to use tobacco for sacred ceremonial use.

“We want to keep their culture a part of their care as much as possible,” Milich said.

Elder Kathy Mishow of the White Earth Band of Ojibwe said her husband got prescription care and regular follow-up services to quit smoking through Mashkiki. “They do it gradually, and they follow through with him, and he’s been smoke-free for almost two years now,” Mishow said.

Also, Native Americans make up about half the staff, said Milich, who isn’t Native.

That’s reassuring for Native Americans, whose trust in national health care programs has been eroded by historical injustice and violence, Moose said. He said his aunt was sterilized against her wishes under the care of a federal program. “It’s difficult providing services to this population because there’s so much trauma,” Moose said.

This is particularly important given that Native Americans “probably lead every health care disparity that we track,” Moose said.

“It’s really important for us to keep chipping away at that disparity” by pushing a patient-first focus and investing in Native health across the board, Moose said. “Unfortunately, we have a long way to go.”