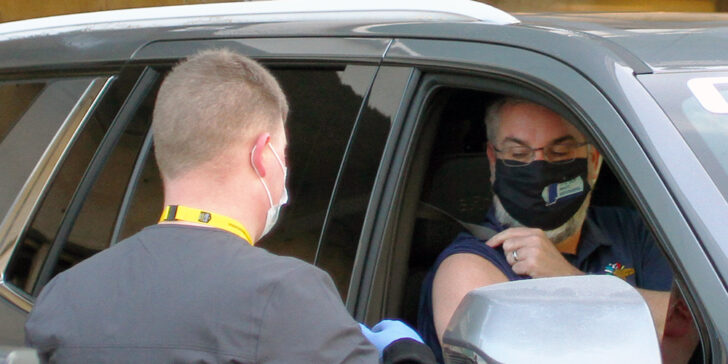 The vote was 32-18, with most Democrats and six Republicans voting no.

House Bill 1001 requires employers that mandate COVID-19 vaccinations for their employees offer three kinds of exemptions – medical, religious and natural immunity from a prior COVID-19 exemption and says testing must be the “least invasive” option available and no more than twice a week.

The Senate had amended the bill to exempt entertainment venues and sports arenas, so they can adhere to contracts that may require all employees in close proximity to entertainers and athletes be vaccinated, Senate sponsor Sen. Mark Messmer, R-Jasper, explained.

The bill, he also noted, says a person cannot be disqualified from receiving unemployment benefits if they complied with requirements for seeking an exemption and were fired anyway.

“What’s lacking, without this bill, is any level of protection for employees,” said Messmer “Without it, employees have no protection.”

The COVID-19 vaccine, he said, hasn’t gone through the same processes as other vaccines.

He said that although he and all of his family members were vaccinated, they all got COVID-19, saying the vaccine, “doesn’t have the robustness we all thought it had.”

HB 1001 was authored by House Republican Majority Leader Matt Lehman, R-Berne, with most of the Republican legislators listed as co-authors, including Speaker. Todd Huston, R-Fishers.

But both versions of the bill – the House and Senate versions – require employers mandating vaccinations allow religious exemptions when the employee has stated in writing he or she is declining the vaccine “because of a strongly held religious belief.”

The bill as passed by the Senate exempts hospital workers because, according to Messmer, the Supreme Court decided hospitals, nursing homes and all facilities that accept Medicaid and Medicare can require their employees be vaccinated.

The provisions in the bill the governor had requested include allowing the state to continue to receive extra federal funding for the Medicaid funding the state has been receiving during the pandemic and additional SNAP funding through April 16, and allows the state health commissioner or the state health department to issue standing orders allowing children age 5-11 to be vaccinated outside of a doctor’s office.

“We’re pretty disappointed with how the final bill came out of the Senate,” she said.

Stand for Health Freedom, which has 19,000 members in the state, had been pushing for the bill to be amended to say requests for religious exemption must be granted “without further inquiry” – similar to the language included for medical exemptions.

“If it stays in this version without the conference committee fixing it, we’d rather it die,” Wilson said.