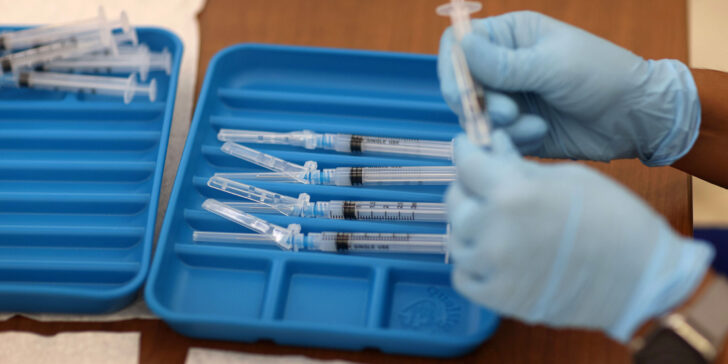 Some people who have been infected with coronavirus have questioned whether they really need vaccines.

The U.S. Centers for Disease Control and Prevention recommends people get vaccinated regardless of whether they’ve already had COVID-19. That’s in part because it’s still unclear how long immunity lasts after an infection. Studies have shown that antibodies hang around in the blood for at least eight months after getting sick, but some recovered patients have gotten reinfected.

COVID-19 jabs give the immune systems of people who were previously infected an extra leg up to fight the coronavirus, including against new, more transmissible variants, other research shows. And because the delta variant, first identified in India, can spread among vaccinated people, that extra layer of protection for recovered patients is probably helpful.

“If you’ve had exposure to COVID before, don’t think you’re immune to variants,” says Benjamin Ollivere, a trauma surgeon who studies COVID-19 at the University of Nottingham in England. “Have your vaccines.”

Now, the evidence that even recovered people benefit from the shots is mounting. Based on the latest studies, here’s what experts know about past infections and getting vaccinated.

One dose may work, but two could be better

One vaccine dose might be sufficient to protect people who have already had COVID-19, lab-based studies suggest. One shot for those who recovered from a prior infection boosts virus-attacking antibodies to levels similar to those of vaccinated people who got two doses of an mRNA vaccine, researchers reported August 6 in JAMA. A second dose, however, didn’t further increase antibody levels for previously infected people.

Antibodies aren’t the only part of the immune response that benefit from the vaccine, although the immune proteins are crucial to prevent infection. A single shot was enough for recovered patients to reach high levels of a subset of immune cells called T cells, researchers reported August 3 in Cell Reports. T cells help coordinate and ramp up the immune response when a person is exposed to the virus again.

That suggests that people who had COVID-19 and then were vaccinated with a single dose could be as protected as fully vaccinated people who were never sick. But whether that plays out in the real world, outside the lab, is unclear.

A CDC-led study of previously infected people offers a hint. Kentucky residents who had recovered from a coronavirus infection but weren’t vaccinated were around twice as likely to get infected again as their vaccinated counterparts, researchers report August 6 in Morbidity and Mortality Weekly Report.

People who were only partially vaccinated — meaning they had received only one of two mRNA vaccine doses or had finished a vaccine regimen less than two weeks prior to being infected — were about 1.5 times as likely to be reinfected as fully vaccinated people. So, even one shot offers protection, but two doses could be slightly better. (One caveat is that few people in the study were partially vaccinated, making it harder to estimate the risk of infection.)

Larger studies will help pinpoint whether previously infected people need more than one dose for protection, the researchers say.

Shots are the best defense against variants

Using a single shot to protect previously infected people is promising, but the spread of delta and other variants has called into question whether that single shot is enough.

Lab-based studies suggest that even a single COVID-19 shot makes antibodies from previously infected people better at recognizing other versions of the coronavirus. One mRNA vaccine dose was enough to increase infection-halting antibodies to levels up to 1,000 times higher than before vaccination, researchers reported in the June 25 Science. That was true not only for an early version of the virus from China, but also the beta variant, which first emerged in South Africa, and the closely related virus that caused the 2003–2004 SARS outbreak.

Survivors of that 2003–2004 outbreak also benefit from COVID-19 vaccines. Antibodies from vaccinated SARS survivors could stop not only the coronaviruses behind SARS and COVID-19 from infecting cells, but also animal coronaviruses from bats and pangolins, researchers reported August 18 in the New England Journal of Medicine.

Increasing the amount of time between two vaccine doses can also help antibodies learn to recognize different coronavirus variants, Ollivere and colleagues report August 10 in Science Translational Medicine. Previously infected, fully vaccinated heath care workers in the United Kingdom — where officials allow shots to be given up to 12 weeks apart rather than the standard three or four — had antibodies that could attack variants including beta.

It’s unclear whether the findings would be the same for the delta variant, but Ollivere expects that antibodies from previously infected, vaccinated people should fight that variant off too. That should hold true as long as there are no major structural changes in the spike protein, which would help the virus better hide from antibodies, he notes. “And we know delta doesn’t have structural changes.”

A separate study supports that hypothesis. Previously infected and vaccinated health care workers in France had antibodies that recognized delta better than antibodies from workers who were infected only, researchers reported in the Aug. 12 Nature.

There’s hope that vaccines can tackle yet-to-be-seen variants, too

The more people the coronavirus infects, the more mutations it will pick up, making some experts concerned that more worrisome variants than delta may be on the horizon. But the immune system is apt at rolling with the punches, continually refining its antibody arsenal to better recognize even mutated forms of the virus.

One recent experiment offers even more evidence of vaccine-induced antibodies’ ability to recognize emerging variants. Antibodies from recovered COVID-19 patients who had been vaccinated stopped a version of coronavirus with 20 changes in it spike protein. The spike protein acts as a key to unlock and infect cells, but even with all the changes, antibodies still prevented the virus from infecting cells, researchers reported August 8 at bioRxiv.org.

In the study, which has not yet been reviewed by other scientists, virologists Fabian Schmidt, Yiska Weisblum and colleagues engineered a harmless animal virus that doesn’t make people sick to sport mutated coronavirus spikes. The virus with 20 changes could replicate in lab-grown cells, but it didn’t fare as well as a version of the virus without those mutations — which suggests that the combination of mutations had negative consequences for the virus.

The team then tested how well antibodies from vaccinated or recovered people attacked the mutated virus. “The main question was, ‘What will it take for this virus to evade immunity?’” says Weisblum, of Rockefeller University in New York City.

It’s not impossible that a virus with that many mutations in the spike protein will pop up somewhere around the world and cause problems even among vaccinated people, though that remains to be seen, says Schmidt, also of Rockefeller University. Current variants of concern like beta and delta have around 10 spike mutations. If the virus did accumulate more mutations, booster shots should protect people, the finding suggests.

As antibodies evolve over time, they “know what to do,” Weisblum says. Future vaccines might include slightly varied versions of the virus, to help the body craft a strong immune response. But even if researchers can’t predict how the virus might change in the future, she says, “the immune system will take care of the rest.”