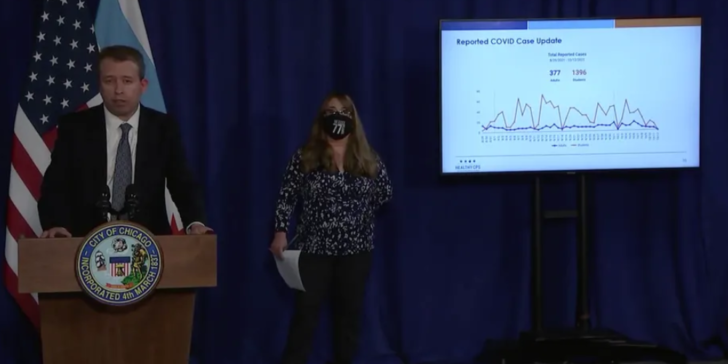 Chicago Public Schools will allow unvaccinated employees to continue working after a Friday COVID-19 vaccine mandate deadline if they take a weekly coronavirus test. The district had originally said employees who failed to get vaccinated by Oct. 15 and did not qualify for a medical or religious exemption would be ineligible to work.

The district announced the relaxing of its mandate Wednesday after Mayor Lori Lightfoot took the same step in allowing unvaccinated city workers to test weekly, at least through December. About 15% of Chicago school district employees remain unvaccinated against the coronavirus, though officials said they have seen a flurry of new vaccination cards in recent days.

District CEO Pedro Martinez said he is reluctant to set a new deadline for vaccination, but he said the district will work hard to see all employees and eligible students get shots before the winter holidays, when family gatherings and travel increase the transmission risk.

“My hope is that it will be a whole campaign that we will be doing together,” Martinez said, speaking Wednesday at City Hall alongside Dr. Allison Arwady, the city’s health commissioner.

The Chicago Teachers Union and two unions representing support staff in the district wrote to Lightfoot Wednesday urging her not to bar unvaccinated school workers from campuses. The letter suggested it would be unfair to grant the option to test regularly to city workers, but not to unvaccinated district employees, who the unions said are predominantly Black and Latina women.

The unions cautioned that a hard line on the vaccination mandate could lead to a staffing crunch, including for positions where the district is already dealing with shortages, such as substitute teachers, janitors, and other staff.

“Punitive enforcement of the vaccination policy in its current form will be ineffectual and will further destabilize already understaffed schools,” the unions wrote, urging the mayor to partner with them on promoting further vaccination among those workers.

Meanwhile, the district said it is finally on the cusp of fulfilling a promise to offer weekly COVID testing at all of its schools. The district had initially said the program would be in place at every campus during the first week of the school year.

All but five campuses hosted testing last week, Martinez said, and the district is on track to offer the tests at all of its 512 schools this week.

However, only 23,720 students — or about 7% of the district’s student body — have opted into voluntary weekly testing. Still, Martinez said that with rapidly growing testing capacity, he is looking into using tests to limit quarantine for students, perhaps allowing those who have been exposed to COVID but show no symptoms to return to the classroom after seven instead of 10 days of quarantine.

Late last month, Martinez and city officials shortened Chicago’s quarantine period for unvaccinated students from 14 to 10 days after cases remained low among school-age children. The decision to shorten the quarantine period came as the district added more campuses to its COVID testing program, and parents complained about lengthy periods of missed school.

Martinez and Arwady said Wednesday they continue to be reassured by the relatively low case counts in the city’s schools, where the reopening of campuses has not led to an increase in cases. The district as a whole has seen six outbreaks, involving three or four related cases.

“The cases are not rising, but the quarantine numbers are very high,” Martinez said.

Testing has proved a logistical hurdle for the nation’s third largest school district. Chicago Public Schools twice delayed its pledge to offer testing at every school as it confronted staffing issues with its Massachusetts-based vendor, Thermo Fisher.

The teachers union has criticized the testing delays and low opt-in rates, arguing that the district had months to deliver a full safety plan with such details in place.

The union is still bargaining with the school district over a reopening agreement, and among the lingering points of disagreement is district testing. The union has argued that Chicago should automatically opt in students to testing and give parents the option of opting out, instead of the other way around.

Last week, Chicago Teachers Union House of Delegates overwhelmingly approved a resolution reaffirming their safety demands across the district. The teachers union has called for weekly testing of students and staff, a guaranteed response from contact tracers within 48 hours, weekly vaccination events at at least 100 CPS schools, increased staffing, and a metric for when to shut down a campus should a school face an outbreak.

The Illinois State Board of Education has issued a “Test to Stay” protocol that gives districts some flexibility to relax quarantine rules when thorough testing programs are in place. Under the policy, students in close contact with someone who has tested positive for COVID-19 can return to campus without a quarantine period if they are tested regularly and present a negative test before returning to school and adhere to rules around mask wearing and social distancing.

As part of the guidance updated in September, students must be tested by districts on days one, three, five, and seven following exposure to stay in classes.

On Wednesday, Arwady stressed that COVID testing is inferior to vaccinations as a mitigation measure at schools and other workplaces.

“Testing only diagnoses you after you already have COVID,” she said.