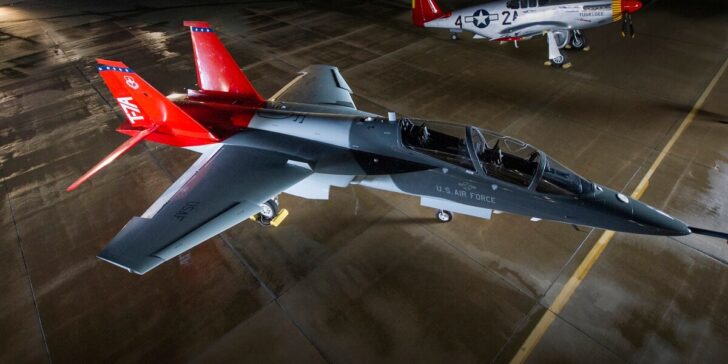 The Swedish company Saab held a grand opening ceremony on Wednesday for its new 112,000-square-foot factory in Indiana where it will produce part of the new T-7A trainer aircraft for the U.S. Air Force in a partnership with Boeing.

Gov. Eric Holcomb attended the event, along with former governor Mitch Daniels, now president of Purdue University, and the top leadership of Saab, including Marcus Wallenburg, the chairman of the board, Micael Johansson, the president and CEO, and Erik Smith, the U.S. CEO. They were joined by Leanne Caret, the president and CEO of Boeing Defense, Space & Security.

The factory is in West Lafayette, in a research park on the edge of the Purdue University campus called the Discovery Park District. Saab says it expects to employ 300 people here by 2027, many of them technical assemblers and engineers.

The new facility is Saab’s first aerospace production facility in the United States.

“It’s super important for us. They’re really good in aerospace technology, so we can recruit from there,” spokesman Petter Larsson, of Saab, said of Purdue. He said there are now 60-70 people employed at the plant, and that production of the planes is expected to start sometime next year.

The West Lafayette factory is being described as “state-of-the-art” and involves a $37 million investment in Indiana. Saab said in a statement this week that the management of the facility will “work collaboratively with Purdue on research and development in sensor systems, artificial intelligence and more” and that the company plans to export products and technology directly from the factory.

“This opening marks a historic moment for Saab,” Johansson said. “This high-tech facility and its growing workforce are a result of Saab’s continued investment in the United States.”

Saab, better known in the United States as a car company, actually started out in Sweden as an aerospace company and has been producing both fighter jets and civil aircraft in Sweden for 84 years, Larsson says.

The factory is the 7th for Saab in the United States, but the first one involved with the manufacture of aircraft.

Boeing was awarded a $9.2 billion contract in 2018 to supply 351 of the planes and also 46 training simulators to the U.S. Air Force over several years and entered into an agreement with Saab to assist with production.

Larrson said it’s not certain when production will begin at the West Lafayette facility, but that it is slated to be sometime next year. Once begun, production will gradually increase, he said.