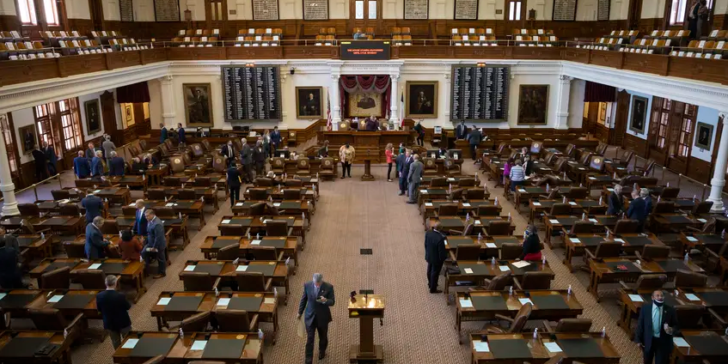 The Texas House on Wednesday approved proposed political boundaries for the lower chamber’s 150 districts that aim to fortify Republicans’ strength in the state House for the next decade.

The House’s 83-63 vote comes as the Legislature rounds out its third special session of the year, an up to 30-day stretch ordered by Gov. Greg Abbott that has focused on redrawing the state’s congressional, Senate, House and State Board of Education maps based on the latest census data. Those numbers, which were delayed largely because of the pandemic, showed that people of color fueled 95% of the state’s population growth over the past decade.

The new map includes 85 districts that would have voted for Donald Trump in the 2020 presidential election and 65 that would have voted for Joe Biden. That’s one less Trump district than was originally proposed in the House late last month. The current partisan breakdown of the House is 83 Republicans and 67 Democrats, though Trump only won 76 of the current House districts in 2020.

The special session is slated to end Oct. 19, which means lawmakers have a week left to hash out differences over those maps and other items included on the agenda set by Abbott.

Debate over the House’s map proposal kicked off Tuesday morning and went into early Wednesday morning. Members considered more than 50 amendments to the map, with dozens of those proposed changes being added or failing largely along party lines.

“I appreciate everybody trying,” Hunter said as he laid out the draft Tuesday morning. “I know that in any redistricting, some have issues and some don’t. That’s the nature of redistricting.”

Some of the largest changes made on the House floor involved Dallas and Harris counties as members from both delegations rallied around their respective proposals.

State Rep. Rafael Anchía, a Dallas Democrat who chairs the Mexican American Legislative Caucus, authored a successful amendment that would update the previous House proposal to add two North Texas districts where Black residents are a majority of eligible voters. Anchía’s amendment also added one Dallas-area district where Hispanic residents are the majority of eligible voters.

The Harris County change, spearheaded by state Rep. Dan Huberty, R-Houston, did not create any additional districts in which residents of color make up the majority of eligible voters, though it did strengthen the partisan splits for certain GOP and Democratic districts in the area.

One of the more tense moments came during debate on an amendment by state Rep. J.M. Lozano, R-Kingsville, that reworks districts in the Rio Grande Valley to make House District 37 more competitive for Republicans. State Rep. Alex Dominguez, the Brownsville Democrat who currently represents that district, panned Lozano over the proposed change, arguing that the delegation had not been notified before he filed the amendment.

Lozano’s amendment was adopted narrowly, 72-70, with several members switching their votes once a verification vote had been requested.

Earlier Tuesday, members considered an amendment by Anchía that essentially would have killed the map draft by striking the legislation’s enacting clause.

“From a moral and legal perspective, we have no choice but to completely wipe the slate clean and start all over,” he told members, citing concerns over a lack of transparency throughout the mapmaking process and with a draft that he argued did not adequately reflect the state’s population growth over the past decade. His amendment failed along a near party-line vote.

For the first time in decades, Texas lawmakers are allowed to draw and enact political maps without first getting federal approval. That preclearance requirement, for states like Texas with a history of discriminating against voters of color in redistricting, was ended in 2013 by the U.S. Supreme Court.

In an attempt to address the absence of that requirement, state Rep. Toni Rose, a Dallas Democrat who serves as vice chair of the House Redistricting Committee, offered an amendment that would have required a federal district court to sign off on the map before it could take effect. The change, Rose said, would have ensured “that Texas is following the rules.” It failed.

Members also voted down amendments offered by Republican members, including one by state Rep. Jeff Cason, R-Bedford, that would have returned his seat to a Republican-leaning one. It also would have made a nearby open seat more competitive to Democrats. Cason’s amendment failed by an overwhelming margin, 119-17.

Before the debate wrapped up early Wednesday morning, state Rep. Erin Zwiener, D-Driftwood, successfully pushed an amendment that places her back into her district. A previous version of the map had drawn the lawmaker into an adjacent, far more Republican-leaning district.

As Hunter introduced the draft to kick off debate Tuesday, he again pushed back against reports that the proposal would reduce the number of majority-Black and majority-Hispanic districts based on eligible voters.

In its analysis of the proposed political maps, The Texas Tribune uses citizen voting-age population from the census estimates to determine whether the proposals increase white-majority districts while decreasing the number of districts where Black and Hispanic eligible voters will be the majority. Federal courts have established that citizen voting-age population, known as CVAP, is the standard measure for assessing Texas’ compliance with rules from the Voting Rights Act that ban efforts to reduce the power of voters of color.

Hunter has argued that the CVAP metric, which is the census’ estimate of residents who are eligible to vote, is not as accurate as voting age population data, which is based on the latest census figures. VAP, however, includes noncitizens who are not eligible to vote.

Hunter, using VAP, said Tuesday before any amendments were added that his proposed map would create two additional districts where Hispanic residents make up a majority and one with Black residents as the majority.

“We disagree with the allegation that [HB 1] does not achieve a good result,” Hunter said Tuesday. He added that while CVAP would decrease in “some majority-minority districts,” such “reductions were unavoidable” and that “in almost all instances,” those districts would “continue to overwhelmingly elect the minority-preferred candidate.”

But in the hours after its passage, multiple House Democrats denounced the map as discriminatory.

“The passage of the Republican Texas House redistricting proposal this morning is part of a coordinated attack on the voting rights of Americans that has been waged both in Texas and across the country,” said state Rep. Trey Martinez Fischer, D-San Antonio.

For the most part, the hourslong debate carried on with little drama among members on the House floor. As the discussion kicked off, though, there was one testy exchange between Anchía, the Dallas Democrat, and Lozano, the Kingsville Republican.

Lozano delivered a spirited defense of the proposal while speaking against Anchía’s amendment that would have rendered the map useless, pointing to historic election results in his district to argue that voters of color would vote for both Republicans and Democrats, depending on the candidate. Lozano also defended the process and timeline by which the map was constructed and then made available for public input, which Democrats and voting rights groups have heavily criticized.

“As entertaining as this hero speech is, does the speaker yield for a question?” Anchía asked Lozano from the chamber’s back microphone.

“Definitely not!” Lozano replied, though he did take questions from Anchía once he finished his remarks soon after.

This article was originally posted on Texas House passes proposed new map for chamber’s 150 districts, aiming to protect Republicans’ majority for the next decade