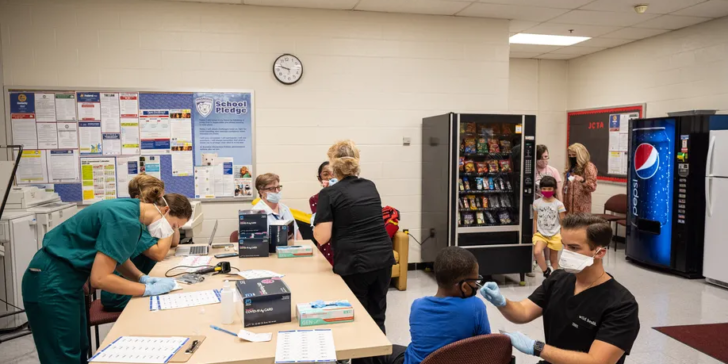 The number of Chicago students consenting to school-based COVID testing has doubled in the last month, but still falls far short of the district’s goal of having 100% enrollment by Feb. 1.

Still, the increase in opt-in rates represents significant progress, after enrollment slowed to a near standstill by November.

A teacher phone banking effort and a change to allow for verbal consent have been instrumental in helping the district increase opt-in rates.

The districtwide opt-in rate currently sits at 34.18%, up from about 16% in Dec. 10, according to data obtained by Chalkbeat through a records request. But the number is still well below the goal set in the district’s agreement with the Chicago Teachers Union of getting all students signed up for testing by Feb. 1.

Still, the district is closing in on another metric set in the agreement with CTU: Getting at least 10% of students at each school consented for testing. About 95% of schools had hit that mark as of Feb. 1 and 69% have at least one quarter of their students enrolled in COVID testing, according to the data obtained by Chalkbeat.

During the January Board of Education meeting, CEO Pedro Martinez detailed the progress doubling consent of students from 40,000 to more than 90,000 students.

Prior to the winter break, more than 200 schools – about 40% of district-run campuses – had less than 10% of students enrolled in testing, but a majority of schools had since reached the 10% milestone, Martinez said at the time.

Many schools in neighborhoods with low opt-in rates have seen participation in COVID-19 testing increase exponentially from Dec. 10 to Feb. 18, data shows.

John Marshall Metropolitan High School in Garfield Park saw an 80% increase in opt-in rates. The school is now among a dozen schools — mostly on the South and West Sides — with 100% of students opted-in for testing.  Arthur A. Libby Elementary in New City saw a similar opt-in rate jump from 2% to 87% from December to Feb. 1, data shows.

At Park Manor Elementary, which reported a number of COVID cases before the winter break, testing consent increased from 51% to 100%.

The increase in districtwide opt-in rates has come after CPS and its teachers union signed a safety agreement that, in part, would involve teachers in COVID mitigation strategies and pay them stipends for extra assistance with contact tracing and signing up families for testing.

When Chicago schools reopened in early January after a grueling standoff with its teachers union, some teachers spent the first day back going through class rosters calling parent after parent to get students signed up for the district’s school-based COVID testing.

The goal was simple: increase the number of students enrolled in the program.

The district’s fumbled rollout of its COVID testing program and the persistently low opt-in rates became points of contention amid an alarming wave of omicron cases sweeping across the city.

Parents previously told Chalkbeat that the complicated opt-in form, language barriers, and a lack of communication were among the problems with buy-in.

“We’ve seen the numbers more than double thanks to members’ hard work,” Geovanis said in January.

Chicago Teachers Union leaders have long argued for an opt-out model that would  ensure random tests for any student, rather than a small subsection of the school opted in for testing.

Chicago Public Schools did not respond to a request for comment.