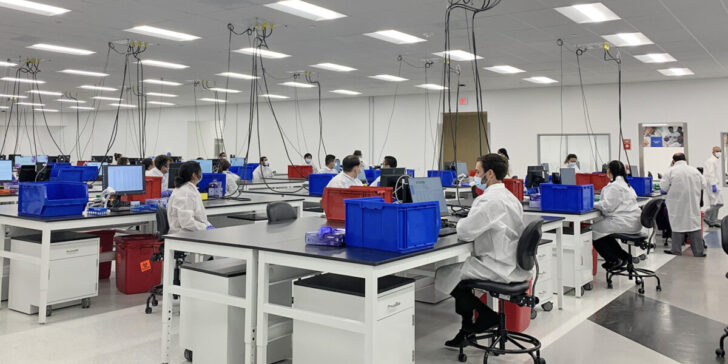 California is quietly ending its contract with the Valencia Branch Laboratory, a $25 million COVID-19 testing lab, breaking off a no-bid contract worth up to $1.7 billion with lab operator PerkinElmer.

Officials from the California Department of Public Health sent a letter on March 31 to PerkinElmer alerting the lab that they would terminate the contract in 45 days, as allowed by the terms of the agreement. The letter stated that the capacity of commercial labs has “dramatically increased” in the last 18 months, and “as such, it is time for California to leverage the now sufficient laboratory capacity of the commercial market and the flexibility it brings.”

“Testing continues to be a priority, and the state will maintain commercial and local public health capacity statewide to perform at least 500,000 tests per day – a combination of PCR and antigen,” CDPH said in an email to The Center Square. “Moving forward, in addition to emphasizing the use of antigen testing, and ‘test to treat’ efforts, PCR testing capacity will be provided through a network of commercial partners rather than the state’s Valencia Branch Lab.”

CDPH did not acknowledge in its statement or letter to PerkinElmer any reports of the problems alleged to have plagued the Valencia Branch Lab.

In February 2021, whistleblowers told CBS13 Sacramento that the lab had a range of problems, including that contamination was causing inconclusive test results and that test swabs were found in the lab’s restrooms. The reports triggered a state investigation, which found that the lab was changing test results days after they were reported without alerting patients, had several incidences of “invalidated specimens” due to lab accidents and failed to assess the competency of more than half of its staff.

Despite the investigation, the state quietly auto-renewed a contract with the Valencia Branch Laboratory on Nov. 1, though documents released in late November revealed that – just 10 days before the contract was renewed – the state threatened to impose sanctions on the lab for its failure to meet public health and safety requirements. Little more than a week after the contract was renewed, CDPH alerted the lab that deficiencies were addressed and no sanctions would be imposed.

CDPH did not immediately respond to a request for comment regarding what will happen to the lab, though Fierce Biotech reported that PerkinElmer would lay off 75 employees on June 4 due to the lab closing.

Senate Republican Leader Scott Wilk, R-Santa Clarita, said in a statement that the lab “failed to serve Californians and the state delayed accountability for months.” Wilk said that Newsom’s administration “failed” when it came to the lab, adding that “this cancellation is cleaning up a mess that an accountable government should have prevented.”

Earlier this week, a bill introduced by Wilk that would offer whistleblower protections to employees working at companies awarded no-bid government contracts was unanimously passed by the Senate Judiciary Committee. The bill was inspired by the whistleblowers who reported the deficiencies at the Valencia Branch Laboratory.