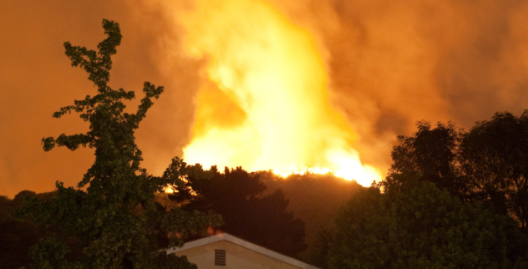 Wildfire season runs through the months of May-October but can occur anytime during the year. California’s hot temperatures and strong winds make it harder for emergency responders to combat the fires. Emergency services are pleading for help to contain the wildfires, asking for assistance from other states.

All three states are going through a wildfire season that has already claimed millions of acres of land. The wildfires were made worse by heatwaves and strong winds, which caused major destruction.

In California, the North Complex Fire burned for weeks since August 17th. The strong winds caused the fire to spread quickly. The fire has killed more than a dozen people and forced many residents to evacuate the area. The August Complex Fire in California was a combination of thirty-seven fires in the Mendocino National Forest. It became the largest fire in the history of California and has burned around 800,000 acres of land so far.

Three fires in Oregon, known as the Riverside, Beachie, and Lionshead fires burned 100,000 acres of land throughout the state. The Beachie Creek and Lionshead Fires both collided into one fire, forcing massive evacuations and destroying homes. Four deaths were confirmed.

Why are the fires catastrophic? Is climate change to blame?

The U.S Forest Service was created in 1905 by Theodore Roosevelt. It was made to protect the national forests throughout the country. Before the creation of the service, California avoided huge fires by allowing frequent harmless fires to occur in the forests.

Every five to fifteen years, fires burned through forests to get rid of the dense growth of plants that can turn to disastrous fires. Plants and ecosystems living in California forests can survive seasonal fires.

The 20th-century forest protection program made sure to suppress fires, including the harmless ones. As a result, forests are left with a buildup of flammable material that can cause disastrous fires. Additional to this danger, the West has reached high numbers in temperatures this year. Climate change warmed California by three degrees Fahrenheit within the past few years. Hotter weather in California means there will be drier forests and longer fire seasons.

As more people moved to the west in later years, the U.S Forest Service focused on keeping flames under control to prevent them from destroying homes. Residents of California are moving into areas that are close to forests at high risk of catching fire. When residents can only afford to move in a place that is at high risk of becoming wildfires, it becomes a huge issue for the state.

Dangerous Air Quality In the Atmosphere

The fires left neighborhoods in states with dirty air in the atmosphere. The entire west coast has skies covered in smoke and is becoming more common in recent years.

The Idaho Department of Environmental Quality issued warnings throughout the state about the bad air quality. In Oregon, a similar warning was announced, warning that children, the elderly, and those with health conditions should remain indoors.  According to a NY Times Report, studies showed the number of 911 calls and emergency room visits increased within days that the wildfires started. Residents affected by the fires are going to hospitals for cardiac arrests and breathing complications.

The air quality in cities such as Los Angeles and San Fransico show dangerous levels of pollution. The mix of gas and other particles in the wildfire smoke can cause serious health problems to citizens, such as difficulty breathing and asthma attacks. Those with heart and respiratory illnesses must stay indoors to prevent further health damage.

It is difficult to predict when the air quality will be safe again. Keeping up to date with the air quality, in a state impacted by the wildfires, the US Air Quality Index provides daily air quality reports.  Public health experts advised people to stay indoors and purchase air-purifiers to keep the harmful smoke from coming indoors.

Scientists claim that climate change will only make wildfires worse. To prevent such devastating fires, California must work with the fires, not fight against them. In other words, the state must stop suppressing fires.

Back in 1935, the U.S Forest Service created a “10 a.m policy” to contain fires every morning when a fire was spotted. Forests in California are dependent on fire to “regenerate” every period. Suppressing fires only makes the forests worse, accumulating the amount of flammable material that burns and causes wildfires.

Reversing the policies that worked on suppressing fires for a century will benefit the forests and residents living in those areas. Vegetation or dried leaves are the perfect recipes for giant piles of fuel-ready to light up and turn into fires. While this practice does not prevent wildfires from occurring again, it can make wildfires smaller and less severe. Combatting both climate change and the suppression of wildfires will benefit Califonia and states like Oregon who has recently suffered fires like no other year.