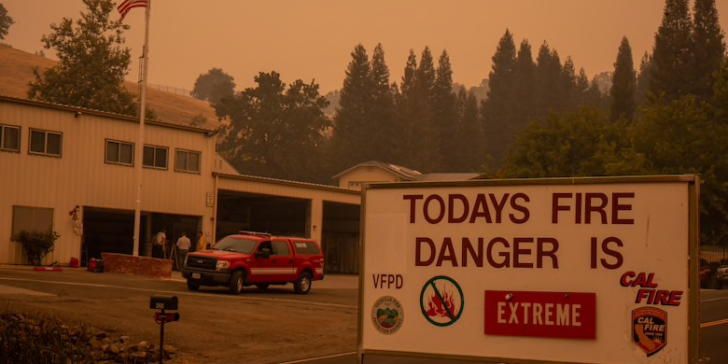 Californians have been experiencing a trifecta of natural disasters in early August with wildfires, high temperatures, and poor air quality striking most of the northern regions of the state.

Over the past few weeks, California had been experiencing a heatwave that yielded unprecedented temperatures. The most extreme of which cases was in Death Valley National Park where the highest temperature, 130 degrees, was recorded since 1913. As temperatures increased before the heatwave, wildfires had already begun to spread in Southern California. For the first time since 2001, California electricity providers instituted rolling blackouts to prevent further wildfires as a result of high energy usage.

Currently there are almost 30 wildfires burning all across California. Most of the wildfires are occurring near the San Francisco Bay area. The largest active wildfire in California is the Scu Lightning Complex fire which has burned 365,772 acres. The wildfire started on August 18th and is currently 20% contained.

Among the lands damaged during the lightning-sparked wildfires is the oldest state park in California called Big Basin Redwoods State Park. The CZU Lightning Complex fire destroyed several structures including the headquarters building, main lodge, ranger station, and nature museum in the state park. The state park known for its groves of redwoods hosted thousands of visitors each year. However, there is hope that the park will be reborn as redwoods are extremely resilient and often resist or resprout following a wildfire.

With the many active wildfires near the Bay Area, the air quality the past few days has skyrocketed. The change in air quality was so drastic that many Bay Area residents could not see past mountains in the distance and it seemed as if there was a orange-yellow filter everywhere residents looked.

On top of this, California governor Gavin Newsom advised residents to reduce energy use in new briefings in order to reduce the chances of more wildfires starting. In other words, residents lacked proper air circulation and were recommended against the use of fans during peak energy usage hours.

These disasters are also occurring while the coronavirus pandemic has shut down the golden state. Thus, for those who do want to go out despite the poor outdoor conditions, they needed to use a specific type of N95 mask that would be effective for filtering poor air quality and prevent droplets from getting out of the mask.

Temperatures have begun to drop this week and the air quality has also gotten better during the night time in the Bay Area. However, this may be short-lived as ABC7 News Meteorologist, Mike Nicco, predicts temperatures to rise again later this month. “For the entire Bay Area, models show average or below average highs beginning around Aug. 29, about 12 days from now” he said on August 17th.