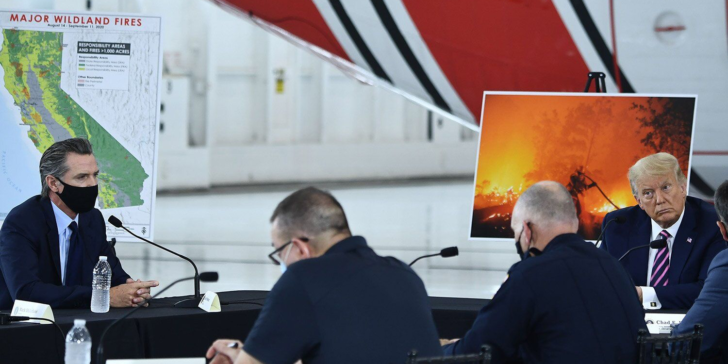 Trump reaffirms his firm position against the effects of climate change even after visiting California and reviewing the devastating damage of the wildfires.

Trump and Newsom talk about fires

As the state of California records record levels of wildfires and air pollution this past summer, President Trump continues his denial of the existence of climate change during his visit to California. Trump met with California scientists and officials to assess the damages done by the wildfires. Among those officials was California governor Gavin Newsom who had a polite disagreement about climate change with the President.

Governor Newsom has consistently asserted a staunch position on the impact of climate change on the severity of fire and the dire action needed to address humanity’s role in regards to this crisis. He even declared that he had “no patience for climate-change deniers” and informs the people that we must “disabuse ourselves of all the BS that’s being spewed by a very small group of people.”

However, during his meeting with Trump, Newsom was unexpectedly respectful and civil in his encounter of disagreement with Trump. He had a respectful conversation in which they also spoke on their great relationship. Newsom said “We’ve known each other too long and, as you suggest, the working relationship I value.” He continued, “We come from a perspective, humbly, where we submit the science is in and observed evidence is self-evident that climate change is real.”

In weekly news conferences, Newsom has even thanked Trump which the Trump campaign has often used in their campaign ads. Trump said, “We actually have a very good relationship. Good man.”

Newsom told Trump, regarding climate change, that they “can agree to disagree” and requested that Trump “respect…the difference of opinion out here as it relates to this fundamental issue on the issue of climate change.” Although the two political officials have clashed during their terms in office, Newsom has remained careful about publicly criticizing the President due to the state’s reliance on federal help for handling the coronavirus and fighting the wildfires.

Trump expresses science may be unreliable

Despite the respectful quality of the two political leaders’ conversation, the exchange between Wade Crowfoot, Newsom’s natural resources secretary, may have expressed the true frustration of the Newsom administration with Trump’s continuous climate change denial. Crowfoot invited Trump and his administration to not “put our heads in the sand and think it’s all about vegetation management.”

Trump responded with, “It’ll start getting cooler, you just watch” which Crowfoot answered, “I wish science agreed with you.” Then Trump said, “I don’t think science knows, actually.” Democratic vice presidential nominee Kamala Harris will be visiting California for a briefing on the fires and Democratic presidential candidate Joe Biden will also be doubling down on climate change.

Trump offended by criticism of his slow response

Meanwhile, despite Trump’s slow response to the wildfires, he has denied his lack of action. During his visit to California, Trump awarded some National Guard soldiers the Distinguished Flying Cross for rescuing people from wildfires. When a reporter asked him why it took him so long to acknowledge the fires, Trump said it was a “nasty question” and added “I declared it an emergency. I gave an emergency declaration.” He continued, “Don’t tell me about doing nothing.”