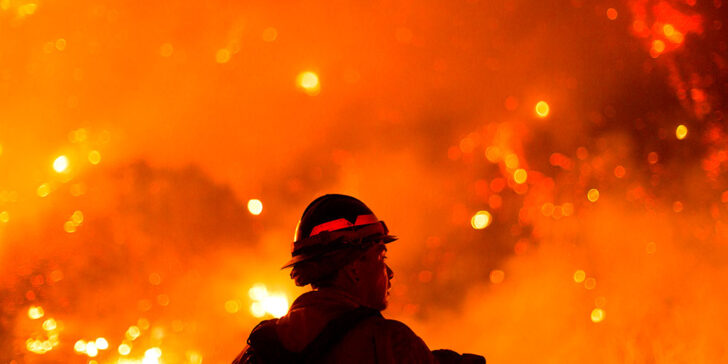 The wildfire season in the western United States and Canada usually begins in August and ends in November.  However due to the increasing temperature of the atmosphere, wildfires are starting earlier, lasting longer, and burning stronger than ever before.

Residents in California, Oregon, and Washington not only have to worry about their homes being engulfed by flames, but also the short and long-term effects that smoke from nearby and faraway fires will have on their health.

How smoke produced by wildfires can cause health risks

Breathing in air that contains smoke from wildfires can cause damage to the heart, lungs, liver, kidneys, as well as hinder the immune system and increase the rate of children being born with genetic birth defects that can be passed down through generations.

Every wildfire is different which mean that the smoke created as a result of the fire is different.  Some smoke may barely seem visible, however, breathing it in is still very dangerous.

Fires that contain high temperatures burn materials complete which results in fuels being broken down to essential elements.  Cooler wildfires leave behind chard pieces of wood and debris which means that the smoke hovering over the areas surrounding these fires consist of toxic particles.

Regardless of temperature, house fires will release more toxic chemicals then a cool temperature fires burning in the woods.  This is because within house fires plastic, furniture, and building materials will burn releasing toxins into the atmosphere.

According to a study conducted by Ana Rappold, who works for the Environmental Protection Agency (EPA) studying the health impacts of air pollution, and cardiologist Dr. Wayne Cascio, who is the current Director of the EPA Center for Public Health and Environmental Assessment, those 65 and older are most at risk of obtaining health risks due to breathing in the toxic air.

Why is the smoke so dangerous?

The reason that even the smallest amount of smoke in the atmosphere is dangerous for the health of humans and other animals is because of PM2.5.  PM2.5 are particles within smoke that are 2.5 micrometers in diameter.

The size of these particles allows for them to get logged in the respiratory system then travel in the bloodstream throughout the body.  Little information is known about PM2.5 particles produced by wildfires.  The knowledge of PM2.5 particles that has been obtained has come from exhaust and powerplants; not wildfires.

Those who suffer from pre-existing heart and lung diseases are most at risk of obtaining further health risks as a result of PM2.5.  However, with enough of these particles being spread throughout the air, everybody’s health is at risk.

The long-term health effects of breathing in only a moderate amount of PM2.5 particles are:

Stanford researchers Marshall Burke and Sam Heft-Neal have found that due to the above average exposure to smoke in California, there have been between 1,000 and 3,000 excess deaths and 5,000 emergency room visits between the end of August to the end of September.

Those that live on the west coast are not the only ones that may obtain health risks from PM2.5.  50% of the smoke in the Colorado’s atmosphere had traveled from the wildfires in California.  On top of that a portion of these particles can travel thousands of miles potentially affecting those on the east coast as well.

A study was conducted on monkeys in a primate research center at the University of California Davis.  In 2008, these monkeys were exposed to a high amount of PM2.5 particles in 10 days.  Years later the monkeys’ lung function was tested, and researchers discovered that the monkeys had reduced lung functions and weaker immune systems then prior to when they were exposed to the dangerous particles.

During the summer of 2017, the atmosphere of Steeley Lake, Montana was engulfed in smoke for nearly 50 days.  Three experiments were conducted on 95 of the residents in the area.  Those participating in the experiment were asked to breathe into a spirometer immediately after the smoke had cleared, one year after, and two years after.

A spirometer is used to measure the strength of one’s lungs.  Of the original 95 participants, one third showed up to conduct the same experiment the next year.  The research showed that by the one-year mark, the lungs of those effected by the smoke in Steeley Lake, Montana had significantly worsened.  By the second year many of the lungs still had not fully recovered.

A good way to protect yourself as much as possible from gaining health risks due to PM2.5 particles is to create a “safe room” in your house.  Invest in a reliable air diffuser to have running in the room at all times.  On top of buying an air diffuser, make sure that no particles can creep into your house through openings underneath doors and cracks within windows.

What does this mean for the future?

NASA satellites detected that the heat radiating from the wildfires in 2020 have been far worse than in previous years.

In Oregon and Washington, some towns are burning from wildfires that have not been affected for decades.  20% of all fires in 2020 are in areas that have not have seen wildfires as recently as the year 2000.

Portland and Eugene broke daily air quality records in 2020.  For a moment, San Francisco even had the worst air quality of anywhere in the world.

In California, 95% of residents have experienced unhealthy levels of air pollution from wildfires in 2020.  In fact, of all of the fires on record in the state of California to release the most harmful particles into the atmosphere, 15 of the top 20 fires to do so, including the top 5, all took place in 2020.

The wildfire in California to release the largest amount of harmful particles into the atmosphere on record, resulted in the air to be 18 times more harmful then the federal health standard.

Earth’s atmosphere increased by 1.4 degrees Celsius between the years 1978 and 2018, causing the wildfire season which typically takes place between August and November to start earlier and end later.

By the year 2050 the climate is expected to grow even warmer and dryer resulting in wildfires being three times larger than they currently are.

A study conducted by researchers at Harvard, Yale, and Colorado State university shows that 82 million Americans will be negatively affected by inhaling smoke produced by wildfires.  Researchers at Colorado State University have also concluded that by the end of the century, the number of people that will die from smoke exposure will more than double to a total of 40,000.

The most effective to stop this from potentially happening is by finding a way to keep the temperature of the atmosphere from rising.  Allowing the average temperature to increase will ensure that the duration and intensity of the wildfire seasons to come will increase with every year.