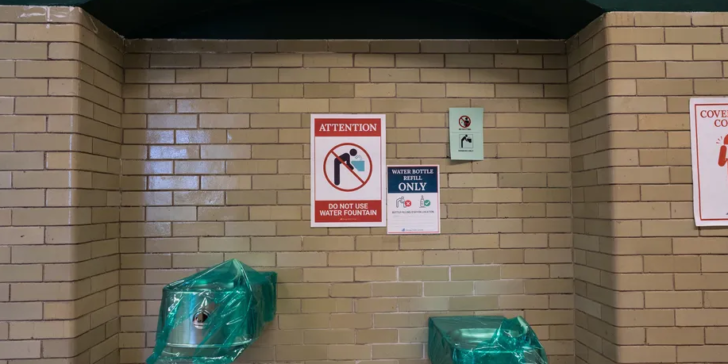 Newark students who soldiered through a year of remote learning have returned to school to find a drinking water shortage.

The district, which did not complete lead testing before buildings reopened in September, has turned off most water fountains and does not expect to restore them until the spring. At some schools, the lack of safe drinking water has left teachers to buy cases of water for their classrooms and students to bring their own water or purchase bottles from school vending machines, according to teachers, parents, and students. At one high school, thirsty students have used bathroom sinks to fill their water bottles.

“It’s inhumane,” said an educator at the school who, like other district employees interviewed for this article, requested anonymity to avoid retaliation.

The district, which is receiving some $281 million in federal pandemic aid, has only sporadically purchased bottled water for schools to distribute, students and staffers said. This summer, the district accepted a donation of 1,200 cases of water from a trucking company.

“The water donation from Jones & Jones Trucking has been beneficial since drinking water sources within the schools have been closed off due to Covid-19 for the safety of students and staff,” read school board meeting notes from September.

State rules require school districts to ensure students have access to safe drinking water. Newark officials have cited “COVID restrictions” as a reason for the water fountain shutoff. However, state and federal guidance for reopening schools this fall did not recommend turning off water fountains.

“There’s really no COVID-related reason not to have functioning water fountains at this time,” said Dr. Susan Hassig, an epidemiology professor at Tulane University.

It appears that at least part of the reason many water outlets remain off in Newark schools is the district’s concern that lead might have accumulated in school plumbing during the many months when buildings were closed. Exposure to lead can cause serious damage to children’s brains and nervous systems.

Officials had planned to have all water sources tested for lead and water filters replaced before school started in September — but the district failed to meet its own deadline, according to school board documents. Now, the drinking water is expected to remain off well into next year.

In the meantime, many Newark students must bring their own water or do without.

“I can’t get any water, so I just sit there and do my work,” said Darren Johnson, a third grader at Louise A. Spencer School, who said the school occasionally provides mini bottles of water at lunch. His father, Ian Quinones, said no one informed him that the water fountains were shut off.

“If I had known about it, he would have been bringing water,” Quinones said. “No one ever told me about that situation.”

The school’s principal did not respond to a phone message. Dawn Haynes, president of the Newark school board, and a district spokesperson did not respond to emails asking why water fountains remain off and how safe drinking water is being provided.

Earlier in the pandemic, some experts cautioned against using public water fountains. However, as research showed the coronavirus is mainly transmitted through the air, water fountain restrictions became less common.

“It was initially a concern, but it has dropped off the radar,” said Hassig, noting that the Centers for Disease Control and Prevention did not include water fountain restrictions in its guidance for reopening schools this fall.

Despite plans to restore school drinking water by September, many Newark Public Schools water fountains remained off when students returned to classrooms this fall. Schools have sporadically given out bottled water or allowed students to use water coolers, but they have also shifted some of the responsibility onto families.

“Water fountains will be turned off,” said Oliver Street School’s fall 2021 reopening plan, “staff and students are encouraged to bring their own water.”

Students who bring reusable water bottles can’t always refill them, as only certain schools are equipped with bottle-filling stations. Some schools sell water in vending machines for about $1.50 per bottle, but that is unaffordable for some families. And schools only sometimes give out free bottled water, students said.

“We used to get small waters” at lunch, said Duquan Paige, a junior at Arts High School, “but not anymore.”

Teachers at some schools have taken it upon themselves to keep students hydrated. One high school teacher said she and colleagues regularly buy gallons of water and paper cups for their classrooms. At the high school where some students resorted to drinking sink water, one educator now brings in cases of bottled water.

“When I found out the kids were filling the water bottles from the sink, we decided to buy water,” she said, adding that the district does not reimburse teachers for out-of-pocket spending on food or drinks. “I feel it’s unethical to have kids without water.”

Initially, district officials had hoped to turn water fountains back on by the start of this school year.

“While drinking water sources have been shut off during COVID, it is the District’s intention to re-open those sources for school opening in September,” according to minutes from a June 16 school board committee meeting.

However, lead can build up in stagnant water inside plumbing that has not been used for an extended period — a special concern in Newark, where elevated lead levels have repeatedly been detected in school water. So, Newark officials determined, turning school water fountains back on would first “require testing and monitoring of all drinking sources as well as the installation of new filters prior to opening,” the board minutes show.

At the same time the district was planning to test water sources and install new filters, it canceled its contract with a company called EcoWater Systems, which had provided filtered drinking fountains and sinks for Newark schools since 2016. The board’s June 22 resolution canceling the contract meant the district now was in charge of managing its own water filters.

“The District now owns the filter equipment and is securing a new vendor for ongoing monitoring and filter replacement,” the board minutes say.

It’s unclear whether the district found a new vendor. But it is clear that lead testing was delayed: Instead of testing all water sources by September, as originally planned, testing did not actually begin until November, board documents show.

Amy Goldsmith, New Jersey state director of Clean Water Action, a national advocacy group, said short-staffed school districts occasionally turn off some water fountains that they don’t have the capacity to maintain. Whether Newark’s water shutoff is due to lead concerns, worker shortages, or some other issue, it is the district’s responsibility to distribute drinking water, she said.

“The schools should provide an adequate water supply for their staff and students,” she said. “It shouldn’t be the burden of teachers and parents to do that.”

Jennifer Santiago agrees. She has been buying bottled water for her son to take to Avon Avenue School.

“The school has no water,” she said. “Schools need to have water.”