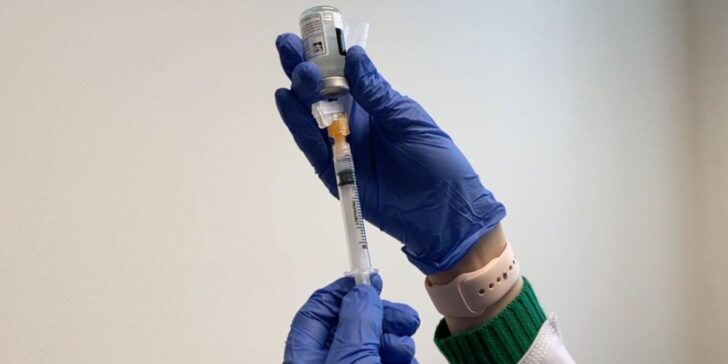 More than 60 people testified at the Indiana Statehouse on Tuesday on the issue of the vaccine mandates, with a sharp split between people representing the business community, who said employers should be able to require employees get the COVID-19 vaccine, and nurses, who pleaded with legislators to step in and stop the mandates.

Lawmakers released draft legislation  Saturday that would require employers in Indiana who require the vaccine to allow religious exemptions after an employee submits a statement saying they are declining because of a “sincerely held religious belief.”

The bill would also allow exemptions for natural immunity and for women who are pregnant or anticipate becoming pregnant, with a letter from a doctor, and would prohibit employers from taking “adverse employment action” against an employee who has requested an exemption.

The hearing before the House and Senate Rules Committee lasted seven hours.

Andrew Berger, the head of government affairs for the Indiana Manufacturer’s Association, said in his testimony the government “should not be intervening in these types of business decisions.”

Kevin Brinegar, the president and CEO of the Indiana Chamber of Commerce, said the chamber opposes all sections of the draft bill that deal with exemptions to employer mandates.

“Employers are getting squeezed from both directions,” he said. “The federal government is saying you must mandate vaccinations, and several states have enacted laws prohibiting vaccinations. While this preliminary draft doesn’t do that per se, it significantly discourages employers from requiring vaccinations, which, in our view, is contrary to what the state of Indiana has been doing for months and months, spending millions of dollars to encourage people to get vaccinated…”

Several nurses from the Ascension St. Vincent hospital system were among those testifying, saying they were suspended from their jobs without pay Nov. 12 and will be fired the first week in January as the hospital denied all of their requests for religious exemptions.

Tina Riffey, a student nurse intern at Ascension St. Vincent in Fishers, said she was suspended. She questioned what will happen at the hospital in Fishers, which is already short-staffed.

“What about safety when there’s no one to care for them?” she asked.

Another Ascension nurse, Rochelle Rott, said she’s been a nurse for 15 years, and worked in the ICU during the pandemic.

“I am a single mom, with a daughter, whom I didn’t see for three months,” she said in her testimony. “Now, because I don’t want to be vaccinated, I’m disposed of.”

“I’m not taking the vaccination,” she said. “And I don’t think we should be forced. I don’t think I should have to re-explain my religious exemption. I’ve had to write it over and over. And I’m not sure it was ever read. And that in itself is really insulting. I got paid last Friday, and I don’t know when I’m getting paid again.”

Trina Marlatt, the chief administrator and head nurse at Ascension St. Vincent Williamsport, a small rural hospital in Warren County, said she also was suspended Nov. 12 and will be fired Jan. 4 for not getting the vaccine. She said she applied for a religious exemption twice and was denied both times. She’s worked at the hospital for 30 years.

Marlatt addressed the issue of access to care, saying the hospital has lost 20% of its workforce because requests for religious and medical exemptions to the vaccine mandate were denied.

Several employees of Crane Naval Base in Southern Indiana also testified, saying there’s no testing option being offered to them, and they are about to lose their jobs a few days after Christmas.

The General Assembly was originally going to meet to make three changes in bill requested by Gov. Eric Holcomb that he said were needed in order for him to end the public health emergency. That emergency will expire on Dec. 1 if it is not renewed. The three changes include allowing waivers so the state can continue to receive additional federal funds for Medicaid and SNAP and also so children 5-11 can continue to be vaccinated outside of doctors’ offices with the COVID-19 vaccine. All three provisions were put in one bill. But vaccine exemption sections were added.

The full House and Senate will meet at the Indiana Statehouse Nov. 29, and both chambers are expected to vote on passage of the bill on that day or on the following day.

If passed, it will take effect immediately, as the bill contains an emergency clause.

The entire hearing can be watched on the website of the Indiana General Assembly.