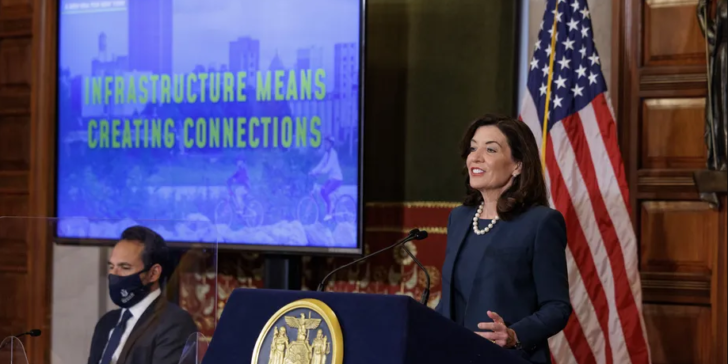 Gov. Kathy Hochul proposed a $2.1 billion increase for the state’s public schools and called for a four-year extension of New York City’s mayoral control of schools in her first budget address Tuesday.

Hochul’s proposal builds on her State of the State address earlier this month, which outlined plans to recruit and retain more teachers, boost mental health resources for schools, and get more New Yorkers to college.

Her plan to increase school aid was no surprise, as it solidifies commitments made last year to fully fund Foundation Aid — the formula that sends more dollars to higher-need districts and is the base for New York’s school budget.

Her proposal to extend mayoral control is yet another sign that she and Mayor Eric Adams are, so far, seeing eye to eye. While the system is expected to stay intact, lawmakers may attempt to tweak the city’s school governance structure.

Hochul wants to spend $31.3 billion on school districts next fiscal year — about $2.1 billion more than what they currently receive from the state. That’s largely driven by a $1.6 billion increase in Foundation Aid, which districts can use most flexibly, including to hire more teachers or create new student programs. That increase is what New York’s Board of Regents sought in December.

Hochul’s funding proposal has been long expected. It stems from a commitment by state lawmakers and the Hochul administration to Foundation Aid and to increase spending by $4 billion by 2023, thanks to an increase in tax revenue and federal COVID stimulus dollars last year.

Her administration’s plan is a departure from the Cuomo era, which resisted fully funding Foundation Aid until last year. Cuomo had, however, increased school spending during his tenure, solidifying New York’s status as the highest spender per pupil in the country.

New York City’s mayor controls the nation’s largest school district with a board that includes a majority of mayoral appointees instead of an elected school board. The state law that created the structure expires once again this June, nearly six months into Adams’ tenure; an extension requires approval from state lawmakers. It was last extended in 2019 under former Mayor Bill de Blasio.

The system was created under former Mayor Michael Bloomberg to replace a fractured and often corrupt collection of school boards across the city. But parents and advocates have long criticized the system for not including their voices in major decisions that have shaped the district in the past two decades — a feeling that appeared to grow during the coronavirus pandemic and the disruption of in-person learning.

In a statement, city teachers union president Michael Mulgrew said the current system “does not work for students and parents.” He said the union has recommended modifications “that would help restore checks and balances to the system,” but did not elaborate on what those were.

Hochul wants an 11% increase in tuition rates for state-approved, privately run special education programs that serve thousands of children with more intensive needs, according to the budget proposal. That mounts to an annual increase of more than $240 million. The state would continue to reimburse 60% of those costs, which are fronted by districts such as New York City.

Stagnant state funding has contributed to the closure of such programs and a shortage of seats for 3- and 4-year-olds with disabilities. More than 22,000 New York City children are enrolled in these programs. Rate increases for the preschool special education programs temporarily stalled after the 2008 recession. Since 2015-16, the state has approved a 2% annual rate increase, which trails what public schools and programs for older children have received.

Hochul vetoed a bill in December that would have provided preschool special education programs with the same annual rate increase that school districts receive.

In her State of the State address, Hochul described multiple proposals to recruit more teachers to combat a shortage, including speeding up the certification process, creating a new teacher residency program, and temporarily increasing how much retired educators can make while still earning their pensions.

Her budget briefing, however, did not detail exactly how much would go toward those proposals. State Budget Director Robert Mujica said it would involve an unspecified portion of $350 million that’s dedicated toward boosting various workforces across the state.

One of Hochul’s goals is to get more New Yorkers through college. She’s proposed spending $150 million toward the state’s Tuition Assistance Program, or TAP, to offer financial assistance to part-time students. That investment is expected to reach 75,000 more students, according to the governor’s proposal.

Hochul also has proposed spending $100 million over two years for a new program that would match funds that high-need school districts spend on expanding programs for summer, afterschool, extended-day, and extended-year learning, as well as for hiring mental health professionals and creating school-based mental health services. The fund would match federal COVID relief dollars that districts spend on those specific types of programs and services.

The state will hold virtual hearings over the budget, including one focused on K-12 education on Jan. 26 at 9:30 a.m.