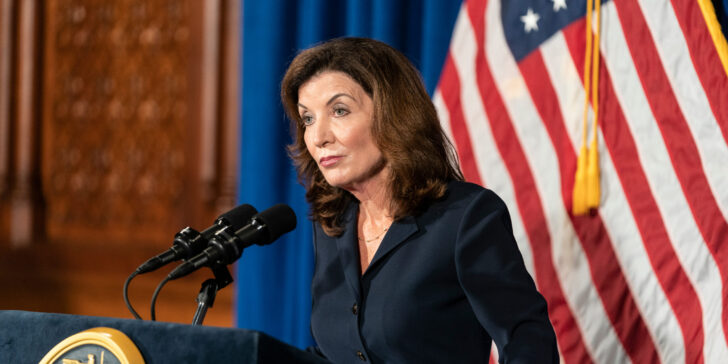 In just the first four months of the state’s fiscal year, tax revenues for New York exceeded projections by more than $5 billion.

At the same time, the state owes the federal government $9 billion for loans used to pay unemployment benefits — a debt that could send employers’ taxes skyrocketing as they attempt to recover from the pandemic.

And, as Cuomo appointees continue to run key fiscal agencies, the state has again missed deadlines to reveal details of spending and revenues, infuriating experts.

As new Gov. Kathy Hochul begins to put her own imprint on the state’s finances, she will have to make a series of decisions that show whether she is prepared to make a sharp break with the policies of the Cuomo administration.

State Comptroller Thomas DiNapoli and fiscal experts are already calling for her to commit to building up the state’s reserves to avoid severe budget cuts for the next downturn. Business groups want her to use the surplus to help pay down the unemployment benefit to limit tax increases.

Many groups are calling on Hochul, who pledged “a new era of transparency” in Albany, to make good on forging an un-Cuomo-like openness on budget issues.

“We need to be cautious,” DiNapoli told THE CITY as he released a report on the unemployment insurance debt. “That means not spending it like the tax revenues are forever. Build up reserves for when the next downturn comes.”

“Pay as you go capital [rather than borrowing] would be a smart thing to do, too,” he added.

The state budget adopted in April increased spending by $36 billion or 8% compared with the pre-pandemic budget for the year ended March 31, 2020. The plan reflected $4 billion in new taxes annually expected from increases on the wealthy and corporations as well as billions in federal aid.

But even as the federal aid is phased out, future budgets are expected to remain over $200 billion.

The unexpected $5 billion in revenue is a result of a stronger than expected recovery — in the rest of the state, if not the city — and added revenue from the tax increases on the wealthy included in the budget.

The surplus is expected to grow when revenues for August are released later this month, though many worry the spread of the Delta COVID-19 variant could slow the economy and tax collections in the coming months.

The unemployment insurance debt has failed to get much attention as the state confronts so many other pandemic crises, including the disastrous rollout of the rent relief program. Meanwhile, some 800,000 New Yorkers just saw their federal unemployment checks cut off, leaving them to rely on state benefits.

“It’s a sleepy corner of the policy arena,” Ken Pokalsky, vice president at the Business Council of New York State, said of unemployment insurance debt. “We only deal with it once a decade.”

Under the unemployment insurance systems, states are expected to accumulate reserves to be able to pay their basic unemployment benefits during economic downturns.

New York ran out of money during the Great Recession of 2008-2009 and borrowed $4 billion that it took until 2015 to repay. To make the system more solvent, the state  raised the amount of wages subjected to the UI tax, reaching $11,800 this year. Taxes range from 1.2% of that amount to 8.5%, depending on whether a company has a history of layoffs.

While the system built up a record $2.65 billion reserve by January 2020, the amount was so inadequate that the federal government deemed only California to be in worse shape.

When the pandemic recession hit, New York State paid out almost $100 billion in unemployment benefits, according to DiNapoli’s report. New York had to borrow $10 billion from the feds, but an influx of UI taxes and a decline in the number of people receiving aid has allowed the state to repay $1 billion.

“We are very concerned about smaller employers and that such a big increase in rates could set them back,” DiNapoli said.

The DiNapoli report also suggested the state could seek to have Congress forgive part of the debt, although how likely that is given the large number of states that either did not need to borrow or have repaid their loans seems uncertain.

More than 30 states have used their federal aid to pay down their unemployment debts, including a $3.5 billion infusion in Virginia.

While New York has committed all its federal aid to the state budgets in the next three years, the new surplus could be used for unemployment debt, a move both the Business Council and the Partnership for New York City support.

The taxes increases on wealthy still rankle business leaders but using the money to avoid a tax increase on employers has emerged as a priority.

“New York’s best move would be to shock the world by reversing the 2021 tax increases,” said Kathy Wylde, CEO of the Partnership. “Since that is unlikely, it would be prudent to invest surplus revenues in job training and reducing the UI debt, rather than placing another cost burden on employers.”

Meanwhile, fiscal experts hope that Hochul’s commitment to a new style of governing will lead to an overhaul of the budget practices of the Cuomo administration.

The state has still not issued a budget report on the fiscal year’s first quarter, which ended June 30. The state routinely takes weeks to issue details on the budget until weeks after it is adopted, a move New York City accomplishes in just a few days.

When the state overspent on Medicaid several years ago, Cuomo delayed a $1.7 billion payment to Medicaid providers from March to April, a sleight of hand that balanced one budget at the expense of the next one.

The Cuomo administration frequently moved money from the budget to agencies like the MTA in order to make state spending look smaller than it is.

“My ears perked up when the governor started talking about transparency,” said Andrew Rein, president of the Citizens Budget Commission. “We have obfuscated the amount we spend and the lack of transparency is a significant problem in state finances.”

A spokesperson for the budget office did not return a request for comment.