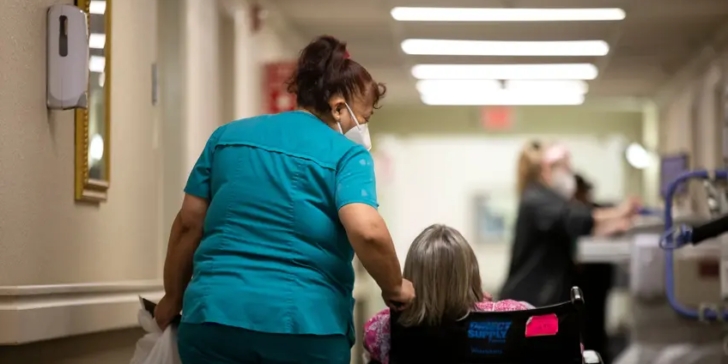 Ronald Payne was on the verge of carrying out companywide furloughs this week at the nursing home chain he runs in Texas, letting go of anyone on staff who had not gotten at least one shot of the COVID-19 vaccine, as mandated by the federal government.

That might have meant well over 100 people at Southwest LTC Management Services’17 Texas nursing homes, he said.

Instead, his facilities, along with most of the other 1,200 nursing homes in the state, were able to continue business as usual after a federal judge last week blocked the Biden administration’s COVID-19 vaccination mandate for health care workers.

The new rule, announced in August, required that all eligible employees of health care facilities that participate in Medicare and Medicaid programs get at least one dose by Monday, Dec. 6.

Facilities that did not comply could receive civil money penalties or lose their access to that Medicaid and Medicare funding, which is used by as many as 85% of the residents in Texas nursing facilities.

Last week’s decision by U.S. Judge Terry Doughty of Louisiana is a temporary reprieve. But it allows Texas nursing facilities that rely on that funding — and most do — to keep pushing for more vaccinations of their employees.

This is key in a state that lags behind more than half the nation in getting nursing home employees vaccinated. Current numbers indicate that Texas could see the exodus of tens of thousands of skilled nursing staff if the mandate were to go into effect. As of late November, Texas nursing homes reported that about 72% of their employees had gotten at least one shot, according to state and federal statistics.

“Let’s just say that it had gone into effect this week,” said Payne, CEO of Southwest LTC Management Services. “I’d be down 20% of my staff.”

At a time when nursing homes are already experiencing a staffing shortage, it was an especially frightening prospect.

Texas responded to the new rule by filing its own lawsuit, with Texas Attorney General Ken Paxton calling the mandate “an unprecedented federal vaccine decree” on health care workers.

The federal requirement that all health care workers be vaccinated came at a time when the nation was in the throes of a record-breaking, deadly delta COVID-19 surge. As cases were climbing in nursing homes, political tensions increased over mask mandates and vaccine politics, and the nation’s vaccine effort lagged due in large part to vaccine hesitancy.

Hints that there would be vaccine requirements for health care workers began to surface during the spring, when efforts to inoculate groups that worked with aging populations — such as those in nursing homes and in home health — slowed.

Workers who have decided not to get the vaccine argued that they could keep themselves and their residents safe with current protocols or that they feared potential vaccine side effects.

Some facility administrators have said that COVID-19 was being brought into facilities largely by visitors, not the employees, and that the mandate wouldn’t solve the issue of cases popping up in nursing facilities.

The addition of vaccination mandates for nursing home workers is seen by many as one more burden for a struggling industry already squeezed by a shrinking workforce during this pandemic.

According to recent surveys by the Texas Health Care Association and LeadingAge Texas, two nursing home industry groups in Texas, facilities across the state have seen a 12% decrease in their workforce in the last year. At least one-third of survey respondents are turning away new admissions due to staffing shortages, the survey says.

In addition to all that, the potential for a sudden drop in staffing due to the mandate would be disastrous for some facilities, said Kevin Warren, head of the Texas Health Care Association, the state’s largest group of long-term care facilities.

In some cases, residents would need to be transferred so that those remaining could get adequate care from the much smaller staff, he said. In others, stopping admissions altogether may be the only way to meet staff shortage, he said.

“Based upon where in the state you are and what a provider’s current staffing issues are, if you have significant resistance to the vaccination and people who are not able to work anymore as a result of the mandate, it can be devastating,” Warren said.

While some nursing homes are reporting vaccine rates as high as 100%, others have less than half of their staff who have had at least one dose of the vaccine, which was what the mandate would have required for employees by Monday.

One nursing home in Harris County shows only 35% of its staff as having at least one dose, according to the U.S. Centers for Medicare and Medicaid Services. The facility is limiting visitation after it reported on its website last week that two residents have COVID-19, which also infected some staff members.

State health officials have renewed their ongoing push to increase Texas’ overall vaccination rate as the holiday season arrives amid an increase in cases and positivity rates in some areas of the state — which currently is blamed on the delta variant of the virus. More than 55% of Texans have been fully vaccinated.

There’s been a renewed intensity to that vaccine and booster shot effort, especially after the omicron variant of the virus arrived in the United States last week.

The first case of the omicron variant in Texas was reported on Monday, and it is presumed by scientists to be at least as contagious as delta, which is still considered the most powerful COVID-19 strain so far. But omicron’s severity and hospitalization rates are largely unknown.

Long-term care facilities have been trying for a year to convince their employees to get vaccinated, as they care for the population that is most vulnerable to COVID-19 — the sick and the aging — for a year. They’ve hosted on-site clinics and offered incentives like more paid time off and vaccine bonuses.

A couple weeks ago, Payne, the nursing home chain CEO, said only about 45% of the employees across the 22 facilities that Southwest runs in Texas and Oklahoma had gotten at least one shot of the vaccine.

As of last Friday, that number had climbed to about 78%, he said. One rural facility in Southeast Texas, he said, recently had only about 20% of its employees vaccinated. Then, a nurse at the facility called the local health department to set up a vaccination clinic at the facility. As of last week, more than 88% of its staff had gotten at least one dose, according to federal numbers.

That facility’s vaccination rate “was one of the lowest in the state,” he said. “I don’t know if it was because the local health department was involved or what it was, but that was extremely successful.”

Statewide, the trend is the same. On Oct. 1, nursing homes in Texas, which employ about 100,000 people statewide, were reporting an average vaccination rate of 60%. By last week, that number was up to 69%.

Payne’s facilities won’t do the furloughs as long as the mandates are kept at bay, but they will go forward with plans to start requiring unvaccinated employees — who include those granted religious exemptions allowed by the new rule — to take extra precautions.

And they will keep up their efforts to get most or all of their employees vaccinated, Payne said.

Payne supports vaccination, but doesn’t believe it should be mandatory. But the new rule has had its silver lining, he said.

This article was originally posted on With the federal vaccine mandate for health care workers halted, Texas nursing homes dodge furloughs and fines