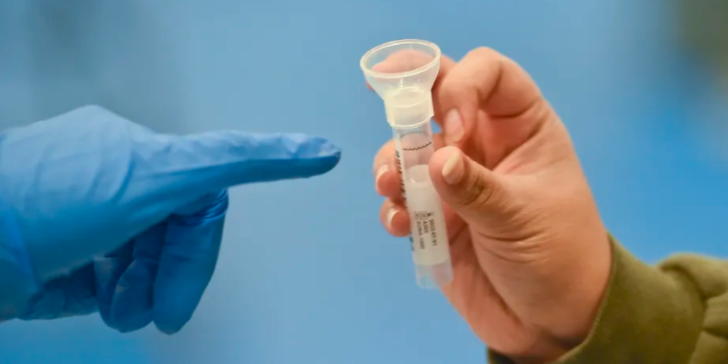 Nearly two months after Chicago Public Schools reopened classrooms, the district’s school-based COVID testing — a key component in its strategy for reopening schools safely — has had a rocky start, with multiple failed deadlines, staffing problems with the testing vendor, and a complicated opt-in process.

There has also been little buy-in from parents, some of whom told Chalkbeat the district has not communicated clearly about the program.

So far, only about 7% of the district’s student body, or about 23,720 students, have enrolled in the testing program across Chicago Public Schools, according to the district’s latest figures.

Those numbers trail behind other cities, including New York City, where at least 35% of eligible students have opted in for testing. About 50% of students have submitted consent forms for school testing in Detroit. In New Jersey, Newark Public Schools struggled to start its testing last month, but still had about 20% of students signed up for its program.

In Los Angeles, the nation’s second largest school district, all students and staff members are mandated to test weekly to go to school.

In the weeks since Chicago schools reopened, the district’s testing program and low opt-in rates have come under fire by the teachers union leaders and some parents, who have questioned the program’s effectiveness.

The school district initially said the program would be in place at the start of the year but it was pushed back twice.

Calls by the Chicago Teachers Union for an opt-out model, similar to Los Angeles public schools, intensified after two mothers of Jensen Elementary School students died, possibly due to complications of COVID. At the time, 11 out of 17 classrooms at Jensen were quarantined.

But district officials say they need parental consent for COVID testing and there are legal reasons it requires parents to opt in for testing and not the other way around.

The Centers for Disease and Control and Prevention, Illinois Department of Public Health, and Illinois State Board of Education “guidance states that testing should not be conducted without the informed consent of a parent or guardian,” the district said in a statement. “Furthermore, there is no legal authority that allows a school district to conduct health screenings for infectious diseases making consent a necessity.”

The district is still scaling up its testing program to provide weekly testing to students and unvaccinated staff by the end of the month, according to Chicago Public Schools.

But standing outside Belmont Cragin Camras Elementary School on Monday morning, union leaders, teachers, and local school council members said the testing program was still spotty and plagued with issues, such as insufficient testing supplies and infrequent testing at schools across the district.

Union president Jesse Sharkey said weekly testing was promised to all students during the summer but in some schools, students are rarely being tested.

Teacher Nidia Carranza said the neighborhood had suffered among the highest rates of COVID-19 in the city, and was still suffering from the trauma of the pandemic.

“We were promised eight weeks of testing, so far we have only received two. That 25%  is a failing rate,” Carranza said. “We deserve better.”

Howard Heath, vice chair of the school’s local school council, said they were disappointed the Board of Education had not lived up to its promise on testing.

“We are very concerned about that,” Heath said. “We want to get back to normal and we think testing is going to be a key component in that.”

Members of the group said they are planning on reaching out to parents to sign more children up for school-based testing or register individuals for vaccines.

About two months into the new school year, the numbers of parents giving consent for their children to participate has increased only marginally over the last few weeks. Language barriers, lack of promotion, and a cumbersome opt-in process could be contributing to the low number, according to some parents who spoke with Chalkbeat.

Outside Pilsen Community Academy during a recent school pick-up, Julia Lopez said she had enrolled her vaccinated son, who has asthma, into the school’s testing program. She wasn’t sure how many other students at the school had opted in to the program, which she said had been rolled out in recent weeks.

While she’s happy testing was an option, Lopez said she would feel more “comfortable” if testing was mandatory.

Other parents said they hadn’t heard whether COVID testing had been implemented at the school.

Nicole Dziubczynski, who has two children at Pilsen Community Academy, planned on opting her students in for testing but hadn’t yet heard whether the program was available at the Lower West Side school.

“I haven’t heard or seen anything about testing here,” Dziubczynski said. “But as soon as I hear about it, I’m going to sign them up.”

Dziubczynski said she decided not to opt in her youngest child, who attends preschool at nearby Jungman Elementary, for testing because the self administered test would be difficult for her 4-year-old who has an Individualized Education Program, which outlines the services and interventions a student with a disability should receive.

“He won’t be able to give himself a COVID test,” Dziubczynski said.

Another Pilsen Community Academy parent, who declined to give her name, said she hadn’t heard about testing at the school either.

It’s unclear how district and school officials are reaching out to parents to increase student participation. Chicago Public Schools didn’t respond to questions from Chalkbeat regarding outreach and engagement efforts.

Bree Dusseault, of the Center on Reinventing Public Education, which has been tracking school reopening, said districts and schools are facing a number of challenges including supply and cost to implement such programs.

Among major hurdles, schools simply may not have sufficient staffing to execute such programs so they may not be promoting these testing programs, Dusseault said.

“Testing, in general, is a really helpful … no-brainer strategy for helping prevent spread of COVID,” Dusseault said. “However, on the ground, how it gets executed, and whether schools have the capacity to execute it … is one of the biggest barriers.”

Earlier this month, Chicago’s new CEO Pedro Martinez acknowledged its Massachusetts-based vendor, Thermo Fisher, didn’t have sufficient staffing to provide testing at every school. Martinez also said he was looking into simplifying the consent form, which he described as “very complicated.”

“It is intimidating,” especially for parents for whom English is a second language, Martinez said.

At the same time, Martinez said he was looking at school data to see how the district could strategically focus testing in areas that need it most.

Currently, Dr. Allison Arwady, the city’s top health official, said the goal is to test 10% of unvaccinated people at a school setting in a given week.

Chicago Public Schools did not provide Chalkbeat with opt-in rates by school, saying they were still compiling that data.

District data shows 21,623 tests were administered between Oct. 17-23, an increase of about 20% over the previous week. Fewer than 1% of tests came back positive and 1.8% were inconclusive.

She nearly missed opting her children in because the email notification came from a laboratory and not the school, Spraker said.

Both of her children were recently tested, but she was shocked to learn only one of her son’s classmates was tested — in a class of 30. About half of her daughter’s class had been tested in the same week, she said.

“I don’t feel like CPS has blasted parents enough to sign up for this,” Spraker said. “It takes a lot to get parents’ attention. I think more parents would opt in if there was more communication.”