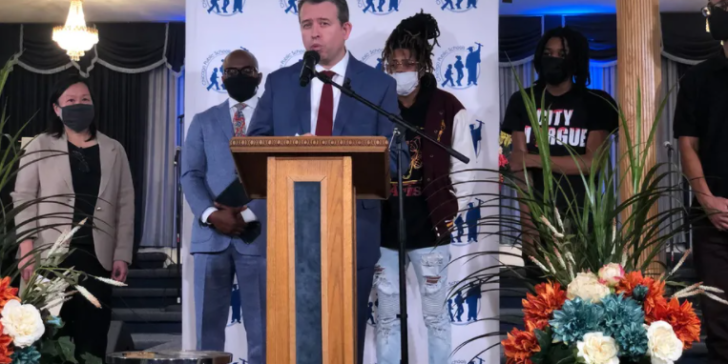 Chicago Public Schools will spend $7.5 million to expand an anti-violence program for teens in “high-risk situations” and connect with them with weekly therapy and dedicated mentors.

The program, called Choose to Change, will reach 1,000 students this school year, CEO Pedro Martinez said Monday. Four community groups will help provide the services to students most impacted by violence and trauma.

The program is being funded by the district, the city of Chicago, and philanthropic donations.

District officials are looking to raise another $4 million for the program to help an additional 500 students, they said.

Bright Star, New Life Centers of Chicagoland, Lifeline to Hope, and Build Chicago will work together to serve 300 students as part of the expansion.

Chicago Public Schools is building on a program that started in the nonprofit sector and has a track record of helping vulnerable students, Martinez said.

Choose to Change, which originated in 2015 as a collaboration among nonprofits, connects teens with trained trauma therapists who provide regular sessions and with mentors who coach them on staying in school and reaching longer-range goals.

The program also helps students and their families with everything from basic necessities or employment coaching.

The students referred to the program are from 13 to 18 and at risk of becoming gang-involved. Others may have been on juvenile probation or victims of traumatic violence, according to researchers.

About 600 Chicago teens have participated in the program since the start, and researchers have touted early evidence of its efficacy. A 2020 research brief by the University of Chicago Crime and Education Labs found that participants had 48% fewer crime-related arrests compared to their peers — and that they were still less likely to be involved with the criminal justice system in the year after the program ended.

Participants were also likely to attend seven days more of school a year than a control group of their peers and were involved with fewer incidents of misconduct on campus. The early research did not find evidence of an impact on grades, however.

Daryl, a participant in the Choose to Change program and a student at the alternative school Ombudsman Chicago South, said Monday that he was “thankful” for the program, which offered him positive support.

“I don’t know where I would be if it wasn’t for the program,” said Daryl, whose last name was withheld by the district.

As of September, more than 250 Chicago children under age 18 had been injured or killed from gun violence. A week before Martinez started his job in Chicago, two teenage students from Simeon Career Academy were killed in separate incidents within hours of one another. In early October, a teenage girl and a security guard were wounded by gunfire on the steps of Wendell Phillips Academy High School in Bronzeville.

On Monday, Martinez, who was raised in Pilsen, said it was a “difficult time for families.”

“I have never seen violence be so explicit and we see it every week … It’s not in our schools, but it’s in our communities,” Martinez said. “We can’t ignore it. We have to join together. We need to provide these services to students that really need it.”

After the Phillips shooting, Martinez said there needed to be all hands on deck to address the needs of students at schools reeling from gun violence.

During a press conference earlier this month, the new district leader said he was going to partner with the mayor, the police department, school-level crisis teams, and surrounding communities to address the issues of violence.

“It can’t be the schools by themselves. It really can’t,” Martinez said. “It’s something we all have to work together on.”