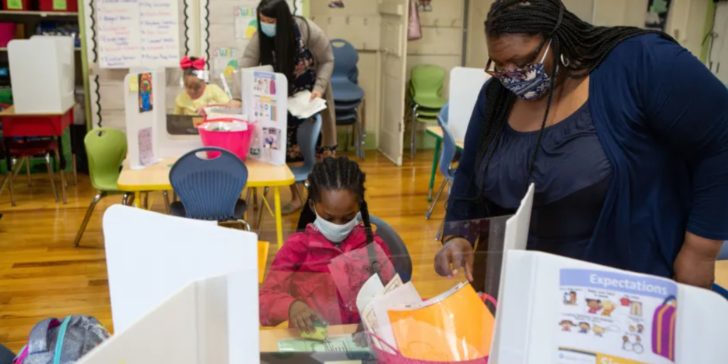 Newark Public Schools will keep its mask requirement, temperature checks, and other COVID preventative measures in place as the infection rate climbs across the city.

The district was set to end the measures this week. But an increase in the city’s COVID infection rate last week stopped any changes to protocols.

“In Newark, our numbers are starting to grow,” said Mayor Ras Baraka on Friday during a live Facebook update. “The numbers are still relatively low but they are growing, so we have to be cautious.”

Meanwhile, cases among students and staff dropped last week, according to the district’s most recent data posted Monday.

Baraka did not mention the district’s mask mandate during that update. The district did not respond to requests for comment.

Of the 500 largest school districts across the country, only 2% still require masks, including Newark, according to a school mask policy tracker from Burbio.

The city’s infection rate climbed in the last few weeks. On Friday, the seven-day rolling average was 5.31%, up from 3.25% two weeks earlier.

“The slight bump was expected due to travel during the break,” Abeigon said.

But when the district updated its COVID dashboard Monday, it showed 16 positive cases among staff and 18 among students last week, a return to case counts seen before the break.

The district did not respond to a question about when it plans to revisit the mask requirement.