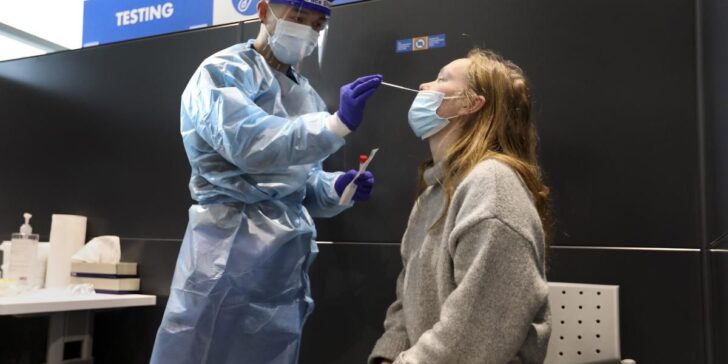 Nearly a month into the new school year, Newark schools have yet to launch the weekly COVID testing that many teachers and parents were counting on.

Routine COVID testing would provide another layer of protection against the highly transmissible delta variant now that school is in session. Newark Public Schools officials told the teachers union this summer that schools would offer weekly testing, and some principals made a similar promise to families.

Yet, three weeks after in-person learning started, COVID testing still hasn’t — and the district hasn’t explained the delay or offered a start date.

“We’re concerned at the district’s lack of respect and failure to communicate the status of such an important issue,” Newark Teachers Union President John Abeigon said in a statement. Noting that the majority of teachers are vaccinated but only 55% of eligible students are, he added, “It’s the parents who should be outraged.”

At a school board meeting Tuesday, Superintendent Roger León said the district is working with two organizations, which he did not name, to set up on-site COVID testing.

“We are in the process of making sure that our testing strategy is implemented in our school system,” he said, without saying when testing will begin. “Once we have the actual date when we will be starting this, we will make sure that all of you are aware.”

Also, for the first time, the district on Tuesday shared its COVID case count for this school year.

Testing students and school employees for COVID on a regular basis can catch asymptomatic infections and reduce the risk of infections when combined with other mitigation strategies, such as masking and vaccination. Federal and state officials have urged schools to offer weekly testing now that students are back in classrooms and those under age 12 are not yet eligible for the COVID vaccine.

Earlier this month, New Jersey said it would provide schools $267 million in federal funds to cover the cost of routine testing, which soon will be mandatory for unvaccinated school employees. More than 550 of the state’s roughly 600 school districts have signed up, state officials said, but did not specify whether Newark is among them. Some of those districts have started weekly testing, but officials could not immediately say how many.

The Newark school district offered weekly pooled testing this spring, when about 40% of students returned to school part time. With pooled testing, students and teachers swab their own nostrils and the samples are tested in batches. This fall, León said, schools will use individual rapid tests instead of pooled testing.

The Newark Public Schools website says the district “is providing” on-site testing for all students on a weekly basis.

But staffers at multiple district schools told Chalkbeat this week that COVID testing has not started, and neither the district nor administrators have given them a timeline for its launch.

“The teachers have been talking amongst themselves, ‘When is testing?’” said an elementary school teacher who, like others interviewed, asked to remain anonymous to avoid retaliation. “We haven’t heard anything.”

Earlier Tuesday, district spokesperson Nancy Deering would not answer questions about testing. She would only say that some information might be provided at the board meeting.

“[Tuesday] is the monthly Board Meeting where everyone expects to hear answers to some of these very same questions,” she said in an email.

However, León did not answer the questions Chalkbeat submitted, including why weekly testing has been delayed and when it will begin.

The district has been similarly tight-lipped about the number of COVID cases in its schools. While other New Jersey districts have posted case counts online, the Newark district and many charter schools have not published that information, which has added to the anxiety within some school communities.

“There needs to be really easy ways for parents to access information around what’s happening at their school,” she said.

This article was originally posted on In Newark, school has started, but promised COVID testing hasn’t