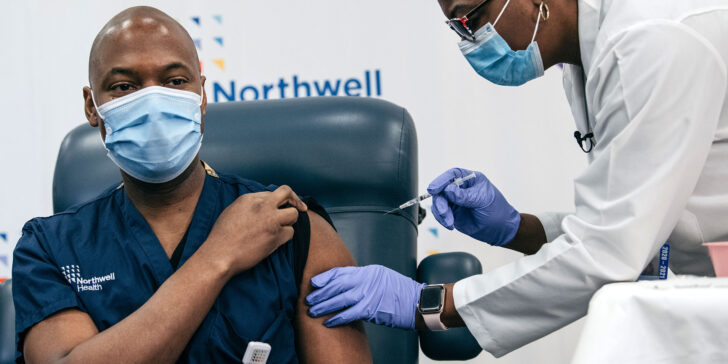 Starting Monday, all indoor public places across New York will be subject to a mask mandate unless those establishments have a vaccine requirement already in place.

Gov. Kathy Hochul announced the new policy Friday, saying in a statement the measure is in response to a winter surge of COVID-19 cases hitting the state.

The vaccine-or-mask mandate will be in effect through at least Jan. 15, with state officials reassessing at that time whether it should be extended. Local health departments will be tasked with enforcing the measures, with penalties reaching up to $1,000 for each violation.

Hochul, in a statement, said her key priorities are to protect New Yorkers’ wellbeing and protect the economy. In the weeks prior, she had said she would be willing to take additional action if caseloads did not drop.

Across the state, the seven-day average for new cases has risen by more than 40% since Thanksgiving. Hospitalizations have increased by nearly 30% over the same timeframe.

“The temporary measures I am taking today will help accomplish this through the holiday season,” she said. “We shouldn’t have reached the point where we are confronted with a winter surge, especially with the vaccine at our disposal, and I share many New Yorkers’ frustration that we are not past this pandemic yet.”

Under the plan, establishments that roll out a mask mandate will be required to ensure all patrons ages 2 and older – regardless of vaccination status – wear a mask at all times while indoors.

Those that limit access to the fully vaccinated will be allowed to accept for proof of vaccination Excelsior Pass or Excelsior Pass Plus – the state’s COVID-19 vaccine passports, other “SMART Health Cards” issued by other jurisdictions or a hard copy of the official vaccination card produced by the U.S. Centers for Disease Control and Prevention.

Individuals must be fully vaccinated, meaning their last dose was at least 14 days ago. The state will accept people who received vaccines approved by the World Health Organization.

Hochul’s action comes after New York City Mayor Bill de Blasio announced Monday private employers in the city would need to adhere to a vaccine mandate for its workers by Dec. 27. Business leaders in New York City said the mayor’s order caught them by surprise.

However, on Friday, Heather Briccetti, president and CEO for the Business Council of New York State, issued a statement saying the group continues to back “necessary measures to help stop” COVID-19.

“Our hope is people respect the state’s directive and employees of businesses by not putting them in the difficult position of having to enforce the mandate through confrontation,” Briccetti said.

“Putting more costly restrictions on small businesses will do more harm than good to the job-creators still trying to regain their footing after the lockdowns of 2020,” Barclay said.