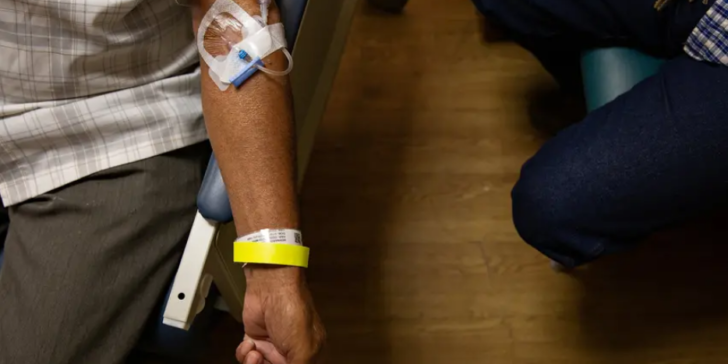 Texas’ health services department is warning that five of its regional infusion centers have run out of the only monoclonal antibody treatment known to be effective against the omicron variant of COVID-19, which now accounts for 90% of new cases in the state.

The Texas Department of State Health Services says its regional infusion centers in Austin, El Paso, Fort Worth, San Antonio and The Woodlands “have exhausted their supply of sotrovimab,” the only monoclonal antibody treatment that appears to be effective against the omicron variant. The department said the scarcity stems from a national shortage of the treatment, which is made by GlaxoSmithKline and received emergency use authorization from the U.S. Food and Drug Administration in May.

Monoclonal antibodies are laboratory-made proteins that mimic how the immune system prevents the virus from entering healthy cells, and they have been used to treat patients at high risk of becoming severely ill from COVID-19.

A scarcity of the treatment would leave the state’s health department without an important tool to combat the virus as cases surge across the country. Some hospitals in the New York region have had to stop offering monoclonal antibody treatment because they’ve run out of sotrovimab. Those hospitals have said they will continue offering them when they receive additional supplies from state and federal agencies.

The department does not know how many additional courses it will receive from the federal government in January, but the supply will likely remain limited because of manufacturing constraints, Van Deusen said.

The federal government paused all shipments of monoclonal antibodies late last month while scientists studied the effectiveness of the antibodies against omicron. But in December, the federal government resumed its distribution of sotrovimab, including 55,000 doses that were supposed to be delivered beginning last week, according to NBC News.

A spokesperson for the U.S. Department of Health and Human Services told NBC News that the department expects more than 300,000 doses to be available next month.