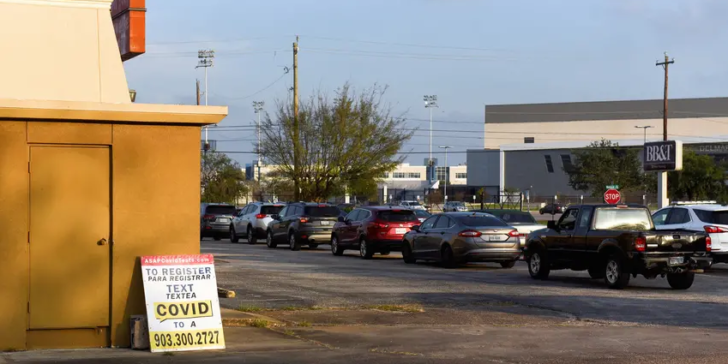 As more people test positive for COVID-19 and hospitalizations climb amid a new wave of coronavirus cases fueled by the omicron variant, Gov. Greg Abbott asked the federal government Friday to open additional testing sites in some of the state’s most populous counties and send new shipments of monoclonal antibody treatments.

Abbott requested testing sites for Bexar, Cameron, Dallas, Harris, Hidalgo and Tarrant counties, which the governor said were selected because of their positivity rates and hospitalization levels.

As of Wednesday the state’s positivity rate — or the percentage of COVID-19 tests that return positive for the virus — was 26.5%, and hospitalizations had climbed to more than 5,500.

Lara Anton, a Texas Department of State Health Services spokesperson, said the agency did not know when the federal government would respond to the state’s request.

A request for comment to the U.S. Department of Health and Human Services was not returned Friday evening. A spokesperson with the Federal Emergency Management Agency referred questions about pending COVID-19 requests to the state.

DSHS said this week the state was running out of the only antibody treatment deemed effective against the omicron variant. Regional infusion centers in Austin, El Paso, Fort Worth, San Antonio and The Woodlands have exhausted their supply of the monoclonal antibody sotrovimab, according to DSHS. The state is asking the federal government to send more shipments of sotrovimab, as well as Regeneron Pharmaceuticals’ REGN-COV2 and bamlanivimab, antibody treatments that have proved effective against other COVID-19 variants.

“The State of Texas is urging the federal government to step up in this fight and provide the resources necessary to help protect Texans,” Abbott said in a written statement.

DSHS has deployed thousands of additional medical workers across the state to help fight the pandemic. Texas has spent almost $7 billion in federal disaster funds and coronavirus relief funds so far on medical personnel.

Seven federally funded COVID-19 community-based testing sites operated in El Paso, Dallas and Harris counties last year, but they closed down in June 2020 despite a bipartisan push for them to remain open longer. At the time, Abbott said the state was prepared to transition away from federal testing sites.

DSHS has also requested medical personnel to be sent to urban areas across Texas that do not have state-contracted staff. With the omicron variant’s arrival and an already strained workforce, hospitals have expressed worries that they might not have the staffing needed to address another winter COVID-19 surge.