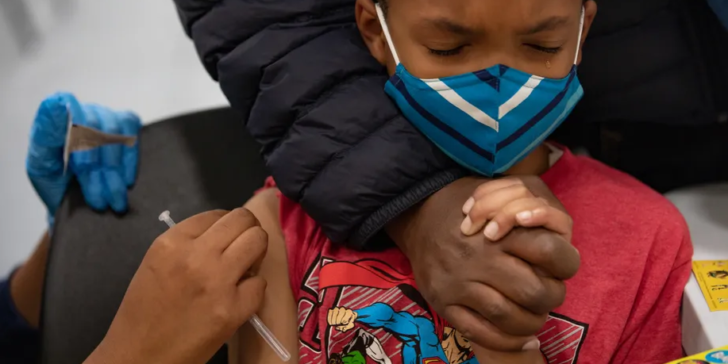 Three months after Pfizer’s COVID-19 vaccine received authorization for 5- to 11-year-olds, vaccine uptake in the age group has seen marginal movement with less than a quarter of Chicago Public Schools students fully vaccinated.

While Chicago Public Schools pediatric vaccination rates surpass national numbers, the gradual uptake locally — with rates especially lagging in schools on Chicago’s South and West Side — is a point of concern for local health officials. They have stressed that schools should be the centerpiece of any strategy to boost rates — and are trying to learn from schools that have launched dedicated campaigns or hosted forums for parents.

Educating families on the vaccine is key to combating  misinformation and increasing uptake, said David Valero, a pediatrician with Esperanza Health Centers, which serves neighborhoods on Chicago’s Southwest Side.

About 22% of all 5- to 11-year-olds in the district have been fully vaccinated against COVID-19, while 34% have received at least one dose, but uptake varies widely by neighborhood. The district rates also fall below citywide numbers, where 37% of all 5- to 11-year-olds are fully vaccinated and 49% have received at least one dose, according to district and state figures.

Across the district, CPS saw an average increase of 11% in fully vaccinated 5- to 11-year-old students at elementary schools from Dec. 1 to Jan. 18, according to data obtained by Chalkbeat through a records request.

Nationally, about 18% of 5- to 11-year-olds are fully vaccinated and about 27% have received one dose of the vaccine, according to the Centers for Disease and Control and Prevention.

After initial high demand, vaccine uptake among 5- to 11-year-olds has declined significantly since November, according to an analysis of CDC data by the Kaiser Family Foundation.

The low vaccination rate among that age group leaves an uncertain path for the remainder of a school year already disrupted by delta and omicron surges, which have forced some districts to quarantine thousands of students or temporarily flip whole schools from in-person to remote learning.

The vaccination slowdown also comes as some school districts have started rolling back safety measures such as masks in the classroom.

Some districts, including New Orleans, have implemented a vaccine mandate for children 5 and up, and the Detroit Public Schools Community District will allow school nurses to begin administering the COVID-19 vaccine to students with parental or guardian consent. But other districts have avoided the politically fraught discourse around a vaccine mandate.

Since July, CPS has partnered with the city’s Department of Public Health, Illinois Department of Public Health, and the Centers for Disease Control and Prevention to promote vaccines. The district has opened four regional vaccine hubs, hosted 600 vaccination mobile clinics and events, and canceled a day of classes to hold a Vaccine Awareness Day after the pediatric vaccine was approved to encourage families to get their 5- to 11-year-olds inoculated against COVID-19.

The district continues to host vaccination events and has provided more than 16,700 patient vaccines through its efforts.

In an email statement, Chicago Public Schools said it would “continue to explore ways to improve access to vaccination and encourage parents to pursue this safe and effective protection.”

Still, these efforts have been marginal in moving the needle, especially at schools on the South and West Side. Data obtained by Chalkbeat through multiple records requests show rates varying widely across the city.

Schools in these neighborhoods also saw the largest rate increase of at least 21% between Dec. 1 and Jan. 18, data shows.

By contrast, elementary schools in predominantly Black neighborhoods including Greater Grand Crossing, East Garfield Park, Englewood, North Lawndale, and Austin had the lowest average vaccination rates with less than 15% of students fully vaccinated. At Charles S. Brownell Elementary in Greater Grand Crossing, less than 1% of students were fully vaccinated as of Jan. 18.

Those disparities hold consistent at the high school level where most students have been eligible for the vaccine since last summer. Majority Black high schools had an average vaccination rate of 28%, according to previous reporting from Chalkbeat.

Despite a stagnation in uptake districtwide for 5- to 11-year-old students, there were some bright spots.

In an email statement, Bronzeville Classical Elementary School principal Nicole Spicer said the school did “what many other CPS schools have done when trying to engage families and improve vaccination rates.”

Since the availability of the pediatric vaccine, Bronzeville Classical, a selective enrollment school in the South Side, has hosted on-site vaccination events and town hall meetings with families to discuss COVID-19 and vaccinations. It also included messaging about testing and vaccination when calling parents about school sports or after-school programs.

“We leaned on our school community, and they responded with positive results,” Spicer said.

Mark Sheridan Math and Science Academy, a magnet school in Bridgeport, saw the number of fully vaccinated students increase from 15% to 50% between December to January. As of Thursday, the school had 62.88% of students fully vaccinated and 73% with at least one dose, principal John O’Connell said.

The principal credited a district-created resource list of vaccination sites that the school has shared with parents through newsletters, emails, teacher communications, and handouts sent home with students.

“We provided persistent and consistent messaging” around the vaccine on a daily basis, O’Connell said. “I think that messaging is what helped get parents moving,” he added.

Since the vaccine has been made available for the 5-11 age group, some parents have decided to get the vaccine to best protect the health of their children and vulnerable family members, enroll students in sports and other activities, or mitigate any adverse effects in the event children contract the virus, O’Connell said.

Some students also lobbied their parents to let them get vaccinated after a grandparent passed away from the virus, he said.

The school as a whole, O’Connell said, has worked to “meet parents where they are” and engage them with any questions they may have around the vaccine.

There could be a variety of reasons for the plateau among 5- to 11-year-olds, Esperanza’s Valero said.

Parents of his patients have expressed concerns over the safety of the vaccine for children; others have cited misinformation for reasons why they have yet to get their children vaccinated, Valero said.

One way to help alleviate those fears is by bringing pediatricians to schools, where they can answer questions from parents and children regarding the vaccine, Valero said.

This strategy is being carried out in other cities.

In Philadelphia, school leaders partnered with the Black Doctors COVID-19 Consortium to help boost vaccination rates among Black and Latino students where rates fall well below city averages. Last month, Dr. Ala Stanford, who has become nationally recognized in her efforts to get Black families vaccinated in Philly, met with students to answer questions and allay fears arounds the vaccine.

Chicago’s vaccine mandate for indoor dining, sports events, and other indoor activities has made a difference in recent months, he said.

Chicago Public Schools has not yet made a decision on a vaccine mandate, but individual school board members have pushed for a conversation on a mandate for the upcoming school year.

During a presentation on COVID safety at a January board meeting, member Elizabeth Todd-Breland said she didn’t foresee beginning the next school year without a vaccine mandate on the table.

CEO Pedro Martinez said he thinks the issue should be handled at the federal level, but agreed on a continued conversation on the topic.

Chicagoland Vaccine Partnership, a nonprofit group promoting and hosting mass vaccination campaigns across the city, has been partnering with trusted community groups and messengers to boost vaccination rates.

Since launching an Education Roundtable last spring with school officials, the mission has evolved from getting school staff vaccinated to now shifting its focus on children, teens and parents, said Scott Thorp, senior project manager at the nonprofit.

The group has discussed inequities and disparities that play out across specific racial and ethnic groups as well as geographic parts of the city.

Thorpe points to the citywide vaccination rate among 12- to 17-year-olds, which stands at 63% – more than double the 29% rate for African American teenagers in the city.

“Those are the things that set off alarm bells for school staff” and community-based organizations reviewing this data, Thorpe said.

Hurdles to access such as transportation, convenient vaccination times, and language barriers still remain an issue for many working-class people, Thorpe said.

“The more we can remove those barriers to the broader access issue,” he said, “the more likely it is that people are going to get vaccinated.”

Working with local trusted messengers and community groups to explain muddled messaging around quarantine and breakthrough infections is another way to break past reluctance and skepticism around the vaccine, Thorpe said.

He acknowledged some bright spots where educators, community groups, and health providers have gone “above and beyond,” but said those efforts weren’t happening on a “systems level.”

“If we want to move these numbers,” Thorpe said, “we have to see something much larger and it’s got to be something region-wide that’s going to reach a much larger group of people.”