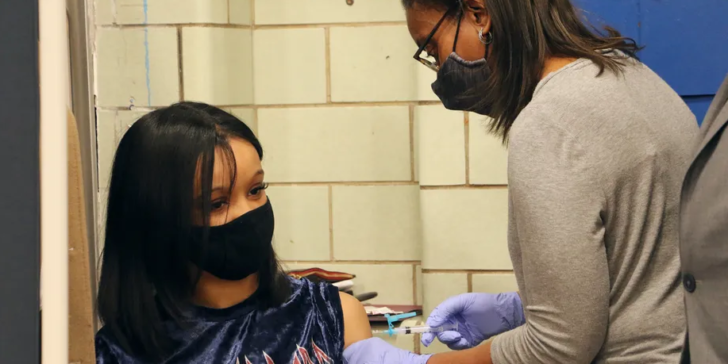 Illinois school districts are scrambling to reassess COVID mitigation rules after a Friday court ruling temporarily suspended the state’s emergency orders for fighting the spread of the coronavirus.

A judge in central Illinois granted a temporary restraining order Friday evening to temporarily suspend the Illinois Department of Public Health and the state board of education’s requirements for masks, vaccines, and weekly coronavirus testing until a trial. In addition, the court ruled that school districts cannot refuse teachers and students admittance to school buildings if they are deemed close contacts to those who tested positive for COVID.

The ruling put the 170-plus school districts named in the case in a sudden spotlight, and some moved quickly over the weekend to either defend or suspend their mask rules. For the state’s 852 school districts, some school officials say it’s business as usual — but it’s not clear whether that will be the case.

Here’s what we know so far:

How did we get to this point?

The ruling was a response to a lawsuit filed by a group of parents and school districts who claimed that Gov. J.B. Pritzker used executive orders beyond what the general assembly intended and without its authority.

Since the beginning of the school year, the governor, the state public health department, and the state board of education have implemented mask mandates for schools, testing protocols for staff and students, and a teacher vaccine mandate. This has resulted in pushback at monthly state board meetings from some educators and parents.

The biggest uproar came from some school superintendents, educators, and parents who raised objections when the state board of education said it would place school districts under probation if they did not follow the governor’s mask mandate. In August, the state board of education said that if school districts who were on probation did not submit a plan, those districts would lose state recognition — resulting in a loss of state funding and blocking sport teams from participating in state athletic associations.

How is the state responding to this?

The state has responded quickly. At midnight on Sunday, the state attorney general, Kwame Raoul, filed an emergency notice of appeal that asks for an appellate court to vacate the circuit court’s order and to dissolve the restraining order. But it’s not clear when a judge would take up the case — and the immediate reaction by districts over the weekend show how much pressure superintendents are under by parents’ groups to respond.

Speaking Monday morning at an unrelated press event about state police and expressway enforcement, Pritzker called the ruling “out of step” and said masks have been an effective tool to contain COVID spread on campuses.

“(The ruling) constrains the ability of the named school districts to maintain safe learning environments — as if kids need a minute more of remote learning,” he said. “The judge’s decision cultivates chaos for parents, families, teachers, and school administrators across the state.”

Pritzker said the hundreds of school districts not named in the suit — which includes the vast majority of Illinois’ 850-plus districts — should continue to follow guidelines for masking and quarantining.

“Poor legal reasoning should not take one of our most effective tools off the table,” he added.

Is this happening in other states?

With no federal mask mandate and public health experts divided about masks in schools, the issue has stoked confusion and debate in Democratic and Republican-led states alike.

As of Feb. 1, 60% of the country’s 500 largest school districts required students and staff to wear masks, but the situation in many places is rapidly evolving. In New Jersey and Delaware, Democratic governors have set timelines for lifting such requirements, citing declining case rates. In Virginia, Republican governor Glenn Youngkin has tried something similar and is now seeing fierce pushback — including a lawsuit — from parents.

In Tennessee, Republican lawmakers pushed through a law limiting district mask mandates except in extreme outbreaks. But implementation has been thwarted by lawsuits across the state on behalf of parents of children with disabilities, who argue their immunocompromised children need mask policies to stay safe.

Federal judges have issued temporary orders siding with the litigants, which has created confusion around mask mandates there, too, with some Tennessee districts following judges’ orders and others following the new state law.

A Chalkbeat review of over a dozen polls since summer of 2021 found that support for masking in schools consistently outstrips opposition among parents and the general public. But recent events show that policies are also becoming prone to dismantling as courts step in and opposing parents’ groups become more vocal and organized.

How are districts impacted by this decision?

Some of the state’s largest school districts – Chicago, Elgin, and Indian Prairie 204 – have defended their policies and continue to require students and staff masks. In letters to parents, district leaders stressed that things could change.

“The order could be placed on hold while the appeal is decided,” wrote Indian Prairie Superintendent Adrian Talley on Monday. “

As a result, the legal effect of the temporary restraining order is uncertain over the next couple of weeks.

Why is Chicago Public Schools exempt from the rulings?

In a statement Friday, Chicago Public Schools said the court’s current ruling would not prohibit the district from “exercising its authority to continue its COVID-19 mitigation policies and procedures, including universal masking by students and staff and vaccination and testing requirements for staff members.”

Chicago Public Schools and its teachers union entered into a new safety agreement last month after an impasse led to classes being canceled over safety concerns amid the omicron surge.

The district said masking and vaccination were key to keeping in school transmissions low. Currently, 53% of students 12 and up are fully vaccinated, while about 33% of 5- to 11-year-old students have at least one dose.

The Chicago Teachers Union in a statement Friday credited the bargained agreement, which would uphold “masking and other critical protections” to keep schools open and protected.

The spotlight is on districts as the case runs its course in the judiciary. The governor said Monday that officials from the attorney general’s office have been advising district leaders.

In her ruling, Seventh Judicial Circuit Court Judge Raylene Grischow wrote that “the policies of each school district will have to be evaluated on a case-by-case basis” and be subject to “policies presented to the school board at a public meeting and subject to public comment.”

Pritzker said Monday that the state would continue to push an appeal, even if COVID cases continue to fall and public health officials advise some easing of masking restrictions.

“Even if we remove the requirement that people wear masks in various settings, there may come a time in the future where we want people to put their mask back on,” Pritzker said. “That’s why we’re fighting this case and appealing this case.”

The emergency appeal filed by the state’s attorney general office requires that the plaintiffs respond in two days, with the appellate court expected to enter a ruling five days after.

This article was originally posted on 6 things to know about the Illinois ruling on school mask, vaccine mandates