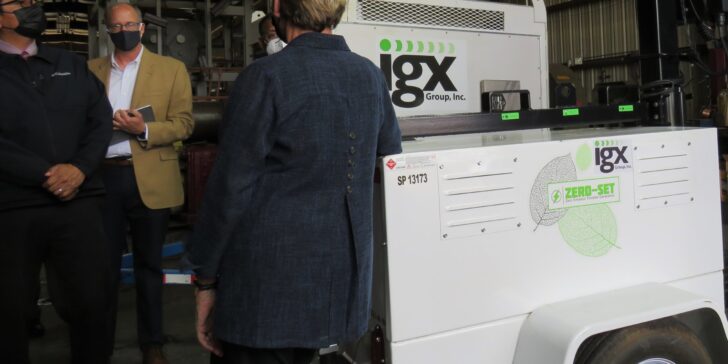 Supporters of hydrogen power say it can create good-paying jobs while also providing zero-emission energy, but some environmental advocacy groups are concerned about a proposal to create a hydrogen hub in New Mexico.

These advocates say the use of fossil fuels to create hydrogen could lead to further emissions from natural gas extraction and could distract from the need to transition to renewable energy sources. About 30 groups sent a letter to New Mexico leaders expressing those concerns.

“New Mexico must prioritize comprehensive, durable, and enforceable climate legislation to light the pathway to a thriving, resilient New Mexico that benefits all of New Mexico’s workers and families,” said Erik Schlenker-Goodrich, executive director of the Western Environmental Law Center, in a statement. “We don’t need a distraction that involves risky bets of taxpayer resources that serves to further entrench the power of fossil fuel corporations.”

The letter starts by highlighting natural disasters that are worsening as a result of climate change such as heat waves, wildfire and flooding.

“These events underscore the imperative for New Mexico to expeditiously move forward with a just and equitable energy transition away from fossil fuels and towards renewable energy — a transition that sets the foundation for a thriving, resilient future for all of the state’s people and communities and its natural heritage,” the letter states.

These concerns come as hydrogen projects are among the proposals for Energy Transition Act funding in San Juan County and as the Escalante Power Plant is being transformed into a hydrogen facility.

This letter came just days before National Hydrogen and Fuel Cell Day, which was Friday. To mark that date, U.S. Department of Energy Secretary Jennifer Granholm released a video on social media. In the video, she held up a glass of water and said, “what’s in this glass right here can be an incredibly powerful tool for us to decarbonize the economy and tackle the climate crisis and create a ton of good paying jobs.”

This was referring to what is known as green hydrogen, which involves using electrolysis to separate the hydrogen in water from the oxygen. It is a more expensive method than some of the other ways of producing hydrogen energy, but it has more support from environmental groups. Some of the advocacy groups that signed onto the letter support green hydrogen, including the Natural Resources Defense Council. And, in the letter, the main concern expressed about green hydrogen was the availability of water in New Mexico.

But hydrogen can also be produced from fossil fuel sources. One way of doing that is known as blue hydrogen. This involves taking natural gas—which primarily consists of methane—and splitting the carbon from the hydrogen.

In the video, Granholm said blue hydrogen can be carbon neutral when using carbon capture and storage technologies and when methane leaks are addressed to avoid harmful greenhouse gas emissions.

Granholm visited Farmington earlier this year to learn about the potential for hydrogen. Her visit came amid the push to pass the Build Back Better package, which includes funding for hydrogen demonstration projects.

“Those demonstration projects have the potential of creating hydrogen deployments in key areas that are transitioning away from fossil fuels and create good-paying jobs in the process,” Granholm said in the video on Friday.

Noah Long, the western region director of NRDC’s climate and clean energy program, compared hydrogen energy to a “narrow pathway with steep precipices on either side.”

“There’s lots of ways that we can do this wrong that will not only increase emissions and risks for our state, but also leave those communities that are hoping that this is a big economic solution hanging if it doesn’t pan out,” he said. “So I think it’s better for everybody to take those risks seriously upfront and to work together with meaningful consultation to the affected communities to see if there are, first of all, opportunities across the entire economy that we can all agree on for decarbonisation, but also to the extent that hydrogen is part of that solution that we’re working together to do it in a way that addresses those risks.”

Long outlined several concerns that he has regarding hydrogen derived from fossil fuels.

“We don’t think blue hydrogen or fossil-methane based hydrogen is a long term strategy for decarbonisation, and even in the short term, it carries very significant risks,” he said.

In the upstream sector, Long said New Mexico has intense levels of emissions from fossil fuel production. He is hopeful that new regulations to reduce methane emissions will help address that, but said “it’s still a very highly polluting system.”

And then, after the hydrogen is separated from the carbon, Long said something has to be done with the carbon. One solution is injecting it into underground reservoirs. While New Mexico is currently exploring options for that type of injection, there are not currently any injection wells in the state for that purpose.

But even if those problems are solved, Long said green hydrogen derived from electrolysis will become more economically advantageous in the future.

“Here in New Mexico, I think there are reasons to believe that green hydrogen, or renewable-produced hydrogen, will be part of the long-term solution for decarbonization,” he said. “But we have to do it right, given our severe and increasing water shortages in the state.”

He said this hydrogen energy will likely be able to provide sustainable, clean energy to areas that are harder to decarbonize.

But Long expressed concerns that the focus on hydrogen may be distracting from other solutions that are needed to address the climate crisis.

“It makes very little sense to me that we would be pushing forward hydrogen policy and resources and investments and not the obvious decarbonisation policies and pathways that we know we need,” he said.

Those policies and pathways include a faster deployment of renewable energy as well as electric vehicle infrastructure to reduce transportation emissions. He said New Mexicans also need to be able to live in “healthy, comfortable, safe and efficient homes” that aren’t reliant on fossil fuels.

Farmington resident Mike Eisenfeld, the energy and climate program manager for San Juan Citizens Alliance, is concerned about this push to build a hydrogen hub, which has focused on natural gas resources in the San Juan Basin. The basin sits beneath a methane hotspot that is, at least in part, caused by emissions from fossil fuel extraction. It is also a region that is trying to diversify its economy in preparation for the closure of coal-fired power plants.

“We were promised that this region has the potential to become a renewable energy and storage hub,” Eisenfeld said when reached by NM Political Report. “That was part of the proceedings with the Energy Transition Act and what we still see as the most compatible replacement for the predicament we’re in.”

The New Mexico Legislature passed the Energy Transition Act in response to news that Public Service Company of New Mexico would be closing the coal-fired San Juan Generating Station in 2022.

Eisenfeld said the focus should be on developing renewable resources as it will take at least a few years for hydrogen projects to be fully analyzed and developed.

Should New Mexico choose to pursue hydrogen, the advocacy groups provided a list of principles that should be considered.

For example, while the groups favor green hydrogen, they say New Mexico’s arid climate and the ongoing drought should be considered. And, in terms of blue hydrogen, they warned of the impacts of fossil fuel extraction to cultural sites, human health and the environment.

The groups also expressed concerns about the transportation and storage of hydrogen, which is corrosive and could damage natural gas pipelines that have not been designed to handle high levels of hydrogen.

“I’ve worked to try to prevent and minimize the impacts of natural gas development for over three decades,” said Gwen Lachalt, a San Juan County resident and the executive director of Western Leaders Network, when reached by NM Political Report. “And I’m just really concerned about adding blue hydrogen, or fossil hydrogen, to our energy mix when, even though New Mexico is making great strides with strong methane rules, we still have a huge methane problem. We still live under a methane cloud in the Four Corners from the oil field and we’ve worked for so long to debunk the myth that natural gas is clean energy and it just simply isn’t. Cradle to grave impacts of natural gas development are huge. And, as we know now, it’s a major contributor to greenhouse gases and [methane] is a much more potent greenhouse gas.”

Additionally, Lachalt told NM Political Report that the San Juan Basin already has abandoned oil and gas wells that need to be cleaned up.

New Mexico is in the process of developing an ozone precursor pollutant rule that could lead to more frequent leak detection and repair of oil and gas facilities, thus reducing the emissions. But that has not yet been finalized and, Lachalt said, people don’t yet know how well the rule will be enforced.