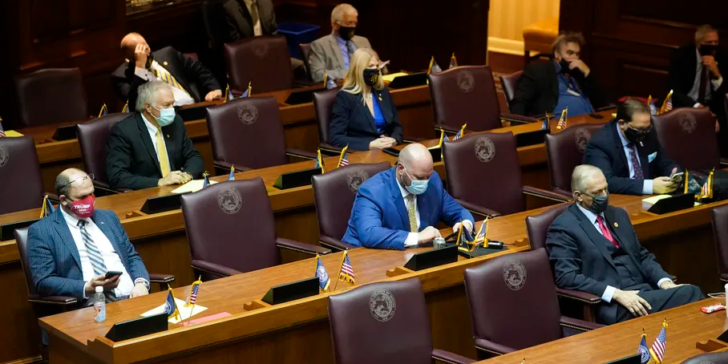 A bill to restrict teaching race and racism has faced a bumpier road in Indiana than in other Republican-led states as lawmakers try to thread the needle between doing something and doing too much.

While states like Tennessee have passed laws that would punish teachers for teaching a laundry list of ideas, the Republican supermajority in the Indiana legislature has instead cut some of the most controversial parts of its bill, House Bill 1134, and left the door open to further amendments.

Though the changes haven’t satisfied most critics, the effort highlights the tightrope walk between appeasing core conservative voters and not alienating moderates as political opinions in rural and suburban areas pull in opposite directions, analysts said.

Hard to ignore too is the growing upswell of opposition that has brought out hundreds of teachers and others to rally against the bill in recent weeks, said Robert Dion, an associate professor of political science at the University of Evansville.

“Farmers and steel mills are important in Indiana. But every district doesn’t have a steel mill in it. Every district has schools and teachers and kids,” Dion said. “When you make life difficult for teachers, you’re going to hear from people in every district in the state.”

Republicans outnumber Democrats by a 39-11 margin in the Indiana Senate, and in the House of Representatives by 71-29.

But that doesn’t mean every GOP lawmaker feels safe in their seat, Dion said, and while the state has voted reliably Republican for years, upsets happen. It’s difficult to predict them, as the state’s rural areas become more conservative and suburban areas become more liberal, he said.

While Republicans don’t risk losing their supermajority, Dion said passing HB 1134 could cost them some seats in the general election.

“It’s possible you might lose when people get mad,” Dion said. “I think they’ve mobilized teachers in a way that could have consequences in the fall.”

In an otherwise good year after Republicans designed the redistricting map, they may hesitate to rock the boat over this issue, said Chad Kinsella, director of the Bowen Center for Public Affairs at Ball State. Their goal is to satisfy primary voters without alienating general election voters.

“You have two constituencies — can you keep them happy enough to stay in office in the primary, but then can you also win the general?” Kinsella said. “They just got to redraw the seats, but there’s a point that people can only take so much.”

The Senate, which gutted HB 1134, also tends to be a more deliberative body, Kinsella and Dion both said. Senators tend to have more experience in politics and represent more people, Dion said, and take more time to think through legislation.

The Senate killed its own version of the bill after national outcry over a lawmaker’s remark on teaching Nazism neutrally.

“Maybe it’s about bringing the rhetoric back down,” Kinsella said.

Compromise and its limits

While Senate Republicans have agreed to change the bill to significantly reduce the burden on teachers and schools, they’ve kept a shortened list of “divisive concepts” that legislators want to ban and that have drawn the most vitriol.

It’s unlikely that senators would strip this portion of the bill, Kinsella said, as the core purpose of the legislation is to ban the teaching of critical race theory — a postgraduate legal theory with a tenuous connection to public schools and to most legislation aimed at getting rid of it.

To cut the concepts out of the bill completely would be to admit a total loss, said Andrew Downs, director of the Mike Downs Center for Indiana Politics at Purdue University in Fort Wayne.

But it’s not uncommon for legislation to change throughout the process, Downs said, as lawmakers consider any unintended consequences. Ideological differences crop up even within a single party.

“You still need 51 members of the House and 26 senators to agree to something,” Downs said. “The group that could be considered extremists … usually isn’t that large.”

Downs said HB 1134 is a legislative response to angry constituents who wanted to see lawmakers take action after a summer of tense school board meetings disrupted by protests over critical race theory and COVID-19 protocols.

But as the state drops masking and contact tracing for schools, for example, the specific form of that action becomes less important, Downs said.

“The legislature can now say, we don’t need to address that because the local folks did,” Downs said. “People want results. Legislators want to be able to sell results. They can say, we didn’t do it, but the threat was enough.”

The role of public opposition

In recent weeks, hundreds of teachers have gathered at the statehouse to oppose HB 1134, in scenes reminiscent of the 2019 Red for Ed rallies for increasing educator pay.

Downs said such rallies tend to affect lawmakers if the protesters come from their districts. Red for Ed worked in part because it drew teachers from all over the state, he said.

Dion, the University of Evansville professor, said the public opposition this year appears to be growing as the session goes on, with senators facing more outcry than House lawmakers did when they passed HB 1134 in January.

Sen. Linda Rogers (R-Granger), who sponsored HB 1134 in the Senate, offered an amendment to the bill in part to alleviate the concerns that teachers raised about their workload under HB 1134.

Nearly 200 people signed up to testify to the Senate committee last week, the vast majority in opposition, saying that changes to HB 1134 can’t fix it.

“A wrongly conceived idea can only be improved so much,” said Gail Zeheralis, director of governmental relations and public affairs at the Indiana State Teachers Association.

The Senate Committee on Education and Career Development is scheduled to hear further amendments and vote on HB 1134 on Wednesday at 1:30 p.m.

This article was originally posted on Despite supermajority, Indiana Republicans change curriculum bill