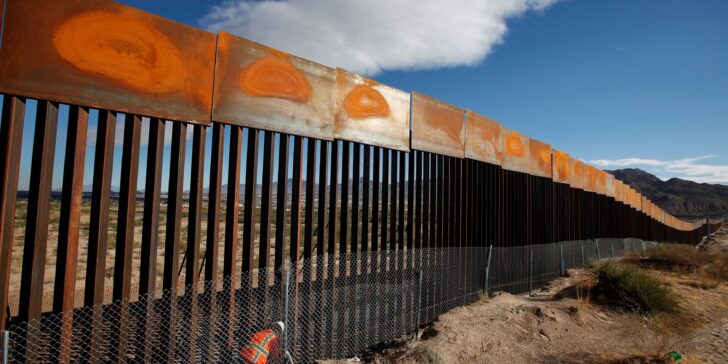 Gov. Greg Abbott on Friday signed into law a nearly $2 billion border security funding bill that will nearly triple the amount the state spends on border defense in the next two-year budget cycle.

“It is the federal government’s job to secure our border, but the Biden administration has failed to do its job, so Texas is stepping up to do what the federal government is supposed to do,” Abbott said as he signed the bill in Fort Worth, surrounded by Lt. Gov. Dan Patrick and state Sen. Jane Nelson, R-Flower Mound, and Rep. Greg Bonnen, R-Friendswood, the bill’s authors.

The $1.88 billion spending bill, which passed as House Bill 9, supplements the $1.05 billion the state already allocated to border security in the spring. Democrats have denounced the nearly $3 billion price tag for not including enough performance metrics to measure success.

“Governor Abbott’s House Bill 9 throws billions of dollars — largely through unfocused, short-term law enforcement efforts — at a situation that demands thoughtful, long-term, comprehensive solutions,” Rep. Mary González, D-El Paso, said in a statement. “As someone who lives within sight of the international border, I know that security is determined by many factors. While law enforcement is certainly one, the governor’s bill fails to confront the dire need for humanitarian assistance for migrants — many of whom are children and families trying to escape death, assault, and enslavement. As long as refugees are piling up on either side of the border, the security situation can’t be resolved.”

But Abbott, a two-term Republican who is seeking reelection next year, has made border security and a plan to erect a wall his central focus this year as he has blamed President Joe Biden’s administration for the increase of migrants this year.

Before signing the border security funding bill, Abbott said Biden’s policies have “opened the floodgates” to illegal immigration, crime, human trafficking and drug smuggling. He said he was signing the bill in Fort Worth because the problems that begin on the border eventually make their way to communities across Texas and the country.

On Thursday, Abbott butted heads with the federal government over thousands of migrants — mostly from Haiti — waiting to enter the country under an international bridge in Del Rio.

U.S. Customs and Border Protection agents have encountered more than 1.4 million immigrants at the Mexican border this year, including more than 212,000 in July — the most immigrants encountered in a single month in two decades.

The number of repeat crossers officials encountered was as high as 34% in June.

Patrick, who leads the Senate, repeated a call he made on Fox News on Thursday night for Republican-led states to tell Biden they were being “invaded” by invoking Article IV, Section 4 of the Constitution. That section guarantees states protection from invasion.

He said the Biden administration’s actions were leading Texas to “los[e] control of our border, and our state and our country.”

Federal officials have acknowledged the challenge at the border because of what they call an unprecedented number of migrants. But the large numbers of migrants have rankled Republican governors, like Abbott.

In June, Abbott declared a disaster in more than 30 Texas counties because of the increased numbers of migrants crossing the border. He also said the state would pay for a wall along the Mexican border, reigniting an issue pushed by former President Donald Trump.

About $750 million of the border security funding bill will go toward the construction of the planned “border barrier.” That could include temporary chain fences as well as concrete barriers. That sum is in addition to $250 million the state already committed this summer as a “down payment” for the wall.

Abbott’s office has said it identified 733 miles of border that may need some type of barrier. The cost for erecting the barrier is likely to exceed the $1 billion currently allocated, but Abbott’s office said it was an “appropriate” place to start.

The governor has also started his own crowdfunding site where private donors can contribute to the wall’s construction. As of Sept. 15, the site had raised $54 million.

The bill will also repay the Texas Department of Criminal Justice for $250 million state lawmakers took out of its budget in June to pay for the border wall down payment. It will also include money for the department to convert three state detention centers into jails that will hold people swept up in the state’s push to arrest migrants for state criminal offenses.

The Department of Public Safety will receive $154.8 million to provide for 79 special operations troopers to be deployed to the border and 52 weeks of overtime pay for border operations.

The bill also includes money for the Texas Commission on Jail Standards and the Department of State Health Services to ensure standards in state prisons that are being converted to jails to house migrants and to provide funding for ambulance contracts needed for the border security efforts.