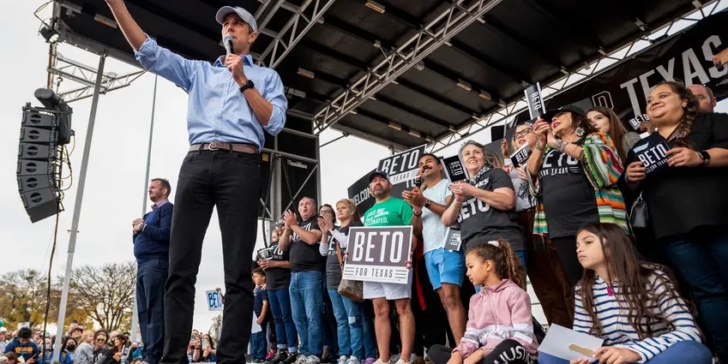 Democratic gubernatorial candidate Beto O’Rourke raised $7.2 million in the first 46 days of his campaign, while Republican incumbent Greg Abbott raked in $18.9 million over the last six months as his war chest topped $65 million.

Both campaigns announced their latest fundraising figures Tuesday morning, hours ahead of the deadline to report them to the Texas Ethics Commission. O’Rourke’s campaign went first, touting his opening haul — which covers Nov. 15 through Dec. 31 — as unmatched by any Democratic campaign in state history.

Abbott said in a statement his contributions “show just how excited Texans are for this campaign.”

The figures confirm what has long been considered the case: O’Rourke is a strong fundraiser, but he is up against a juggernaut in Abbott, at least when it comes to the money the governor has saved up. O’Rourke did not release his cash-on-hand number, but he was effectively starting from scratch when he launched his campaign in November, and his $7.2 million period means his cash on hand remains a fraction of Abbott’s reserves. Abbott had $55 million saved up for his reelection campaign at the end of June.

O’Rourke’s latest fundraising number includes $2 million that his campaign said he collected within 24 hours of announcing his run. Expectations have been high for O’Rourke’s fundraising after he proved a fundraising phenom during his 2018 run against U.S. Sen. Ted Cruz, R-Texas, when he raised more than $80 million. O’Rourke was subject to federal campaign donation caps in that race; Texas has no such restrictions.

Abbott’s haul was not entirely surprising. His campaign already reported raising $9.5 million on a series of reports that were due around the three, roughly monthlong special legislative sessions that occurred during the half-year period.

“While Abbott is taking million-dollar checks from the CEOs who profited off of the grid collapse, we’re receiving support from people all over Texas who want to ensure that our state finally leads in great jobs, world class schools and the ability to see a doctor,” O’Rourke said in a statement.

Abbott ignored O’Rourke in his statement, saying his “donations will help us secure the future of Texas and keep us on a path towards an even brighter future.”

The candidates face an end-of-day deadline to detail to the Texas Ethics Commission their finances for the last six months of 2021.

Both O’Rourke and Abbott have to get through March primaries before they can face each other in November. O’Rourke faces little serious competition, while Abbott has a group of challengers including former state Sen. Don Huffines of Dallas and former Texas GOP Chair Allen West.

Huffines announced Monday that he has raised $12 million since launching his bid in May, suggesting he’ll report roughly $3 million in donations for the latest six-month period. However, his campaign did not volunteer any details about whether his next report will reflect any self-funding, which made up more than half the $9.1 million he touted as his fundraising on the last six-month report, which went through June.