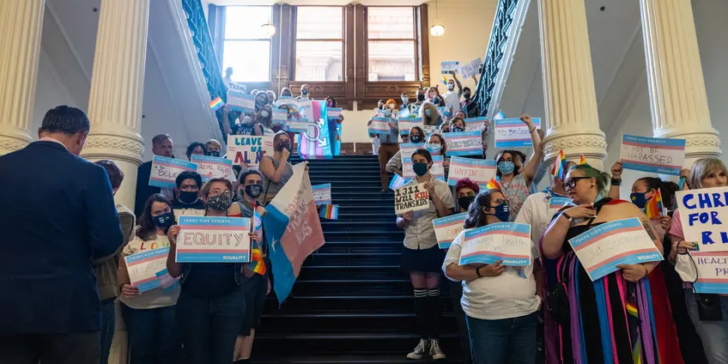 The Biden White House on Tuesday condemned a Texas bill that would restrict transgender student athletes’ participation in school sports, further hinting at a potential future fight with the state over legislation that opponents have called discriminatory and detrimental to transgender youth.

Matt Hill, a senior associate communications director with the White House, denounced House Bill 25, which would require student athletes in K-12 schools to participate on sports teams that align with the gender listed on their birth certificate at or near the time of birth. It was authored by state Rep. Valoree Swanson, R-Spring.

“Our message to young transgender people in Texas and across the country: these hateful bills are bullying disguised as legislation, and @POTUS and our Administration will always keep fighting for the full equality LGBTQ+ folks deserve,” he wrote in a tweet Tuesday.

White House press secretary Jen Psaki said in a briefing that the president supports transgender rights but did not say whether the Biden administration will take legal action against the bill, which has been approved by the Texas Legislature and sent to Gov. Greg Abbott’s desk.

“I’ll leave that to the Department of Justice to determine if they’re going to challenge that, but again our view — the president’s view — is that transgender rights are human rights, whether for adults [or] for kids, and that continues to be our policy,” Psaki said.

The bill’s birth certificate stipulation goes further than current rules from the University Interscholastic League, which governs public school sports in Texas. According to the UIL’s nondiscrimination policy, gender is determined based on a student’s birth certificate. However, the UIL accepts legally modified birth certificates that reflect a student’s listed gender as aligns with their gender identity.

White House spokesperson Ike Hajinazarian told The Dallas Morning News that “the White House will be engaging stakeholders in Texas and other states in the coming days and weeks” but did not specify what action it will take.

Legislation similar to HB25 has passed in at least five other states this year, with legal battles being waged in Florida and West Virginia.

Texas and a handful of other states have sued the Biden administration over its interpretation of LGBTQ protections in the workplace and in schools. Last month, Texas Attorney General Ken Paxton sued the Biden administration over its federal guidance to protect LGBTQ employees that included allowing them to use public facilities that align with their gender identity.

The federal Equality Act, which has been passed in the U.S. House but is pending in the Senate, would offer LGBTQ people federal protection from discrimination in areas such as housing and public education.