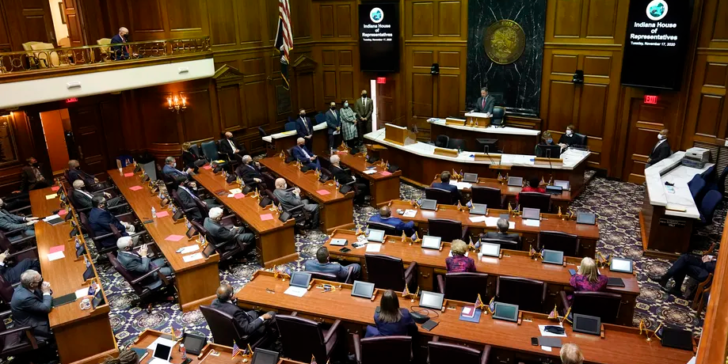 A proposed amendment to Indiana’s so-called “divisive concepts” legislation would drop some of the most controversial parts of the bill, but stop short of completely removing a list of concepts that would be banned from the classroom.

The changes are an attempt to strike a compromise, according to a statement by Sen. Linda Rogers (R-Granger), who’s sponsoring House Bill 1134 as it makes its first appearance Wednesday in the Senate Committee on Education and Career Development.

Among its changes, Rogers’ amendment would narrow a list of concepts that lawmakers want banned from the classroom from eight to three, removing one that would forbid teachers from teaching that students should feel guilt or discomfort based on their personal characteristics like race or national origin.

Teachers had singled out this point in particular as potentially generating frivolous lawsuits and stifling classroom conversations.

The bill, passed out of the House last month, has faced an uncertain future in the Senate, which killed its own version of the bill early into the session after national outcry.

“The changes I am introducing may not be where we end up on all of these issues, but I am offering them as a good-faith attempt at a compromise that respects the valid concerns of both parents and educators,” Rogers said in a statement. “I appreciate the thoughtful discussions I’ve had with hundreds of interested parties on this bill, and I will remain open to input as the legislative process continues.”

Notably, the amendment would strike “political affiliation” from the list of characteristics that the bill protects from discrimination. Opponents had pointed out that such language could stop teachers from condemning Nazism.

Rogers’ amendment would strike the ability of parents who believe schools have taught a banned concept to file suit. Final authority to determine whether a violation has occurred would rest with the Indiana Department of Education.

The amendment would strike the original bill’s mandate for outside curriculum review.

Instead of mandating curriculum review committees composed primarily of parents, the amendment would give districts the option to form such committees. Parents could request that a committee review certain materials.

Finally, the amendment would not require schools and teachers to post most of their learning materials online for public review at the beginning of the year. Instead it would mandate that they use an online learning management system and allow parents to inspect materials upon request.

The Senate is scheduled to hear testimony, consider amendments, and vote on HB 1134 at Wednesday’s committee meeting, at the end of a packed schedule that also includes a hearing on House Bill 1041, which would ban transgender girls from competing in girls’ sports.

Proponents of the curriculum-control bill have said parents need a window into their children’s education. But opponents, including many teachers, say it discounts their professional experience and inserts politics into teaching.

In a statement, Indiana Democrats said the amendment “still falls far short of the mark for teachers, parents, and students.”

“The latest version of HB 1134 remains a slippery slope allowing bad actors to demand neutrality on issues, divide communities, and diminish Hoosier values,” said Lauren Ganapini, executive director of the Indiana Democratic Party.  “The Indiana GOP’s original intentions were to put politics in the classroom, not to create a better future for our children.”