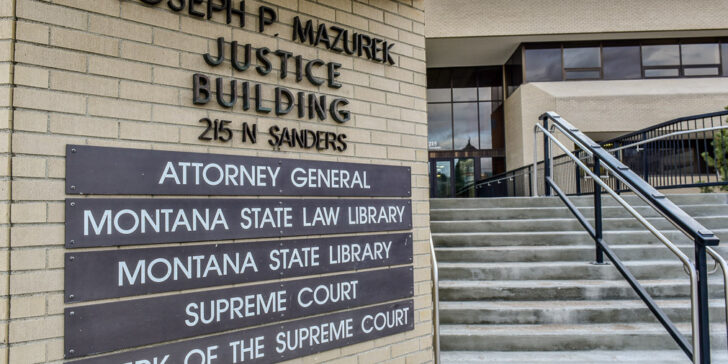 Republican Attorney General Austin Knudsen has contracted with a politically connected private attorney to play a central role in the state’s litigation strategy. The staffing decision comes as the Department of Justice defends laws passed by last year’s Legislature against a wave of court challenges and responds to significant turnover of staff attorneys.

The private attorney, Emily Jones of Billings, is a law school classmate of Knudsen’s and served on his transition team after his November 2020 election. Jones is married to prominent Republican political strategist Jake Eaton, who served as chief strategist for Knudsen’s 2020 campaign and as Gov. Greg Gianforte’s 2020 campaign manager. Eaton was also named as a senior adviser in the attorney general’s office in 2021.

The department’s contract with Jones’ law firm, obtained via a public records request, provides for compensation of $10,000 a month. It states that effective Jan. 3, 2022, she and her firm have been retained by the department “to provide supervision and mentoring to junior attorneys” as well as “litigation management services for the State Attorney’s Office, Civil Services Section.”

The Civil Services Bureau, along with the solicitor general and his deputies, is distinct from other sections of the department tasked with criminal litigation, consumer protection and legal services for state agencies. Attorneys handling civil cases defend laws passed by the Legislature and may represent Montana in multi-state lawsuits challenging federal policies.

At least 18 bills passed by the 2021 Legislature have triggered lawsuits against the state. The attorney general’s office had previously responded to questions about the cost of that litigation by noting it was handling the cases entirely with in-house staff.

Both Jones and a spokesperson for the attorney general’s office said the contract is part of an effort to bolster the agency’s legal capabilities.

“Historically, civil litigation has not been a strength for the department,” spokesperson Kyler Nerison said in an email. “One of Austin’s goals as Attorney General is to bring the civil bureau up to par with the legal ability and reputation of our prosecution services bureau.”

Jones said in an email Monday that Knudsen had offered her a position as his chief deputy when he took office. She turned the offer down, she said, in order to maintain her law practice in Billings and avoid relocating her family to Helena. The chief deputy position is now held by Lieutenant General Kris Hansen.

“This contract with DOJ isn’t responding to the cases brought about by 2021 legislation or turnover inside of DOJ,” Jones wrote. “Rather it results from ongoing conversations between Austin, his team, and me about how I could have the most impact in helping to achieve Austin’s goals to reform the department.”

Since taking office last year, Knudsen has pursued an aggressive conservative agenda, making his office an assertive player in the Legislature’s stand-off with the state judiciary, issuing a legal opinion condemning the teaching of Critical Race Theory, and pursuing multiple challenges to federal policies from the Biden administration, drawing criticism from political opponents and plaudits from many conservatives.

The attorney general has at times indicated he relishes the controversy.

“It’s great being the most hated man in Helena,” he told an audience at a Republican party dinner in Havre Feb. 26, according to Hi-Line Today.

The attorney general has also pursued reforms to give himself more political influence within the  Department of Justice. Knudsen personally lobbied for a bill at the 2021 Legislature that would have allowed DOJ and other agencies to reclassify a significant portion of their workforce from career positions subject to competitive hiring requirements to political appointees who would serve at the pleasure of agency directors.

The proposal, which ultimately failed, drew criticism from opponents who argued it would politicize professional agencies and open high-level positions in state government to nepotism.

Knudsen and the bill’s supporters said it would make it easier for elected officials to chart a new direction for state agencies by appointing more like-minded aides.

“When a new administration is elected, it’s because the people expect some change. And when all you get is one appointed official to be able to do that, it’s very difficult,” Knudsen argued at the time.

Staff attorneys and other career civil servants often maintain positions in state government across changes of administration — a dynamic that, in theory, maintains institutional knowledge and continuity as political leaders are voted in and out of office. Critics of that dynamic, though, sometimes counter that staff holdovers create entrenched bureaucracy that stymies reform.

Under Knudsen, the department has seen significant turnover in the ranks of the attorneys responsible for high-profile civil litigation as holdovers from the administration of Knudsen’s predecessor, Republican Tim Fox, have taken other jobs. Simultaneously, the department has hired a cohort of lawyers licensed to practice law in Montana last year, according to state records.

The justice department’s Civil Services Bureau, which had housed many of the attorneys defending the state in many of the bill challenge lawsuits, has turned over entirely since January of 2021, according to a comparison of prior and current rosters on the department website.

The departures identified by Montana Free Press include two of the three attorneys who initially appeared on the state’s behalf in Board of Regents v. Montana, the case that will determine whether the state’s new law allowing permitless firearm carry on university campuses is constitutional. They also include two of the three attorneys initially representing the state in McDonald et al. v. Jacobsen, which will determine whether a proposal to elect Supreme Court justices by district goes before voters, and two of the three attorneys who represented the state during the first six months of litigation in a federal case over legislation intended to extend the operating life of the Colstrip power plant.

At the start of 2020, DOJ had six attorneys on its Civil Services roster, including bureau chief Stuart Segrest, who had spent 14 years with the department. As of Feb. 25, all six names were gone, with the roster listing two new staff attorneys. Both, according to their LinkedIn profiles, graduated from law schools in California in 2019. Montana State Bar records indicate one was licensed to practice in Montana last October. The other is not yet licensed to practice in Montana but is awaiting results of this month’s bar examination, the State Bar office said Monday.

Knudsen has added other attorneys to the ranks of the department’s upper staff since he took office, including Solicitor General David Dewhirst. Of six new hires identified by MTFP, four were licensed to practice law in Montana in 2021.

Several longtime Montana attorneys interviewed by MTFP in recent weeks say the turnover raises questions about the department’s ability to effectively represent the state’s interests as it juggles complex lawsuits on multiple fronts.

Betsy Brandborg, who retired last year from a 25-year career at the State Bar Association, where she handled ethics questions and provided legal training, said it often takes lawyers years to hit their stride in a new position, especially during the early stages of their careers. Brandborg said she interpreted Jones’ contract as an attempt to shore up the department’s experience.

“There isn’t the sophistication, when you’re dealing with these enormous litigation projects, to adequately respond to the challenges. They just don’t have it,” Brandborg said.

Nerison defended the caliber of the department’s new attorneys.

“We have assembled an outstanding team of staff attorneys and supplemented that with contract counsel where appropriate,” he said.

Under the auspices of the contract, Jones is taking a central role in the department’s litigation. She replaced a departed staff attorney as the state’s lead counsel in the Colstrip case Jan. 25, and is also named as one of two state attorneys of record in ongoing litigation over the districts used to elect the Public Service Commission, Montana’s utility regulation board.

In an email, Jones said she is “currently participating in all of the more than 40 cases being handled by the Civil Bureau,” serving as lead counsel in some cases and as secondary counsel or in an advisory role in others. She said she and staff at her law office spent approximately 125 hours on Department of Justice work in January.

Despite the “supervision and mentoring” line in her contract, Jones also said she doesn’t have direct management authority over department staff, which she said remains the purview of Hansen, the department’s chief deputy, and Solicitor General Dewhirst.

“My supervision authority is limited to the context of directing legal functions in litigation matters,” she wrote. “I do not have any direct reports. I’m not providing any administrative supervision or management of the attorneys or other DOJ staff.”

Jones, according to a biography on her firm’s website, is a third-generation Montana attorney whose father, Blair Jones, served as Stillwater County Attorney and then as District Court Judge for three rural counties in south-central Montana from 1999 to 2018. She has been licensed to practice law in Montana since 2008 and touts experience litigating on behalf of towns, cities, small businesses, Fortune 100 companies and state government.

Jones said she met Knudsen when they were classmates at the University of Montana School of Law and has collaborated with him on several issues over the years. According to state political practices records, she also donated $720, the maximum allowed contribution, to Knudsen’s 2020 campaign.

In 2017, Jones was sanctioned by a Lewis and Clark County District Court judge who concluded that she had violated professional conduct rules for sending letters urging witnesses to resist subpoenas issued by the Commissioner of Political Practices while litigating a campaign finance case involving Eaton’s political consulting firm. She paid about $15,000 in legal fees to an opposing attorney as a result of the order.

Jones said this week that the matter “was a politically charged case involving combative opposing counsel on a fishing expedition.” She said her conduct was ultimately cleared by the Montana Commission on Practice, which reviews disciplinary cases against attorneys.

Jones also argued that her experience in private practice brings the justice department “a much different legal perspective and expertise than you would likely find in a career government lawyer.”

“I believe that bringing my diverse litigation experience and expertise to bear to represent the State and further develop the great team of lawyers Austin has put together does provide value to taxpayers,” Jones said.