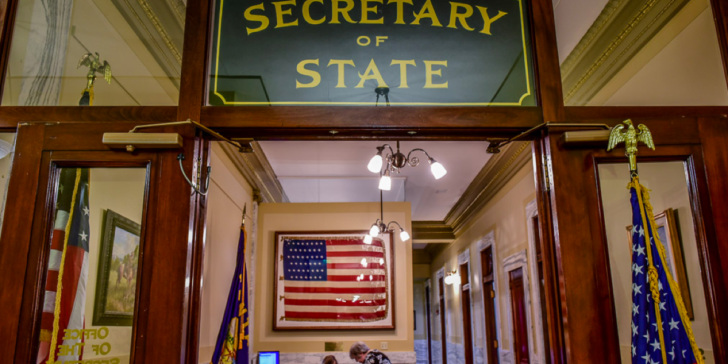 A lawsuit filed by seven Montana businesses against Secretary of State Christi Jacobsen earlier this month seeks to change how Jacobsen’s office handles issues arising from online business filings, and speaks to broader concerns raised by state lawmakers years ago about sweeping changes to corporate laws.

The class action lawsuit, filed in Lewis and Clark County District Court Sept. 1, alleges that the secretary of state’s office wrongfully retained $120,000 in duplicate filing fee charges from Montana businesses in 2020 and has continued to retain such overcharges unless refunds are requested. The situation first came to light in October 2020 when Lee newspapers’ Holly Michels reported that an issue with the office’s online payment platform generated 1,200 duplicate charges for businesses entering annual filings with the state. Jacobsen was running for the office at the time and serving as deputy secretary of state under her predecessor, Corey Stapleton. Michels’ story quoted an SOS spokesperson saying the overcharges were caused by a temporary glitch with the Google Chrome browser and occurred between March 3 and April 5, 2020, after which the issue had been resolved.

However, the recent legal complaint claims the overcharging has persisted despite Jacobsen’s office transitioning to a new vendor for its payment platform. Further, the plaintiffs — which include Billings-based Purple Snow Promotional, Livingston-based Black Dog Farm and Columbia Falls-based Backslope Brewing — allege that the office has continued to adhere to a policy that refunds for overcharges must be requested by businesses in writing. Jacobsen’s office has not yet responded to the complaint, and a spokesperson did not respond to an email seeking comment for this story.

Under the Montana Business Corporation Act, passed by the Legislature in 2019, all business filings with the SOS office must be transmitted electronically. Attorney Rylee Sommers-Flanagan of the Helena firm Upper Seven Law, who is representing the plaintiffs, told Montana Free Press that refund policy places the burden of monitoring for potential overcharges on individual businesses, and their inability to file and pay by any other means gives them no other option.

“The secretary of state’s office, under Secretary Stapleton and continuing under Secretary Jacobsen, were huge advocates of making this system exclusive,” Sommers-Flanagan said. “They pushed very hard to ensure that small businesses cannot pay their licensing fees any other way than online.”

Several Democratic and Republican lawmakers resisted the notion of an exclusively online filing system in 2019, in part out of concern that a change could result in technical problems for Montana businesses. Rep. Andrea Olsen, D-Missoula, successfully amended the Montana Business Corporation Act on the House floor to allow for optional paper filing.

Olsen told MTFP she had a number of reasons to push for an alternative option to digital filing. Some small businesses in the state may not feel secure paying online with a credit card, she said, while others may lack reliable access to the internet. Olsen acknowledges that business practices have changed in the 21st century, but she doesn’t believe business owners should have been forced into such a dramatic change — especially, she said, when the state wasn’t prepared to quickly deal with resulting problems.

“That’s the reason there’s a lawsuit, is because the secretary of state’s office didn’t take responsibility when there was a mistake,” Olsen said. She added that the overcharge situation raises a potentially bigger question: “Is the state system secure, if this kind of mistake can happen?”

During his tenure, Stapleton publicly stated that digitizing the office’s business services registry “reduced 50,000 annual errors in business filings” and created an “error-free relationship” between the state and Montana businesses. Jacobsen similarly trumpeted the move during her 2020 campaign, saying in a televised debate that the SOS office had “absolutely streamlined” the business registry process in her time as deputy.

“I’ve talked to businesses and they’re very satisfied with it, and we’ve kept our business filings low,” Jacobsen said during the virtual debate hosted by MTN News last September. “And I promise to all businesses in Montana for the next four years, I will never increase business filings on any Montana business, and will continue to make it easy for businesses to file and access 24 hours a day, seven days a week, with top-notch customer service.”

Kaiser Leib, a software engineer and plaintiff in the lawsuit against Jacobsen, countered that the current reality for businesses isn’t easy. His company, Townsend-based Pine Street Rentals LLC, was not overcharged for any filing fees, but Leib said he has had to keep a close eye on his business’ accounts to ensure no overcharges occur. If one did, existing SOS policy would require him to write a refund request and submit it to Jacobsen’s office.

Leib’s broader concern is that the overcharge issue could reduce Montana’s credibility as an incorporating authority. Any friction associated with forming a company in Montana, he said, will only spur business owners to incorporate in other states. He argued that an entity retaining money for which it didn’t provide a service wouldn’t be tolerated in the private sector, and shouldn’t be tolerated in the public sector either. Furthermore, Leib added, state agencies “should not pay people to make crappy broken software.”