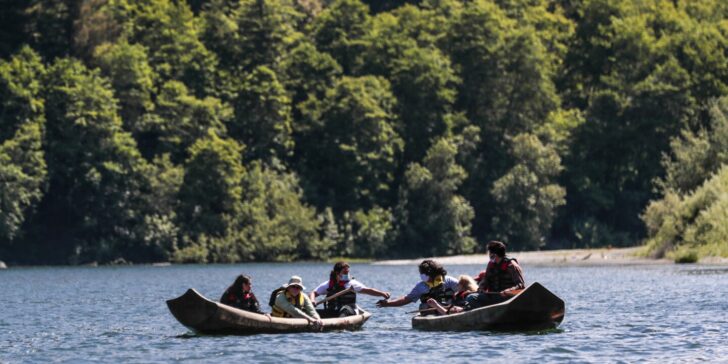 The proposal comes as California officials are bracing for more extreme impacts of climate change in the Golden State, including longer fire seasons, sea level rise and increased risks of flooding. Representatives from the state’s Natural Resources Agency said Friday that the state hasn’t “done enough to heal our lands and waters to protect ourselves” from the impacts of the climate crisis.

With the $100 million in funding for tribes, officials said the groups could acquire ancestral lands and take a leading role in managing forests, rivers and resources. If approved, funding would be included in the upcoming budget, on top of $40 million dedicated to wildfire management transferred to tribes.

“The California way is not to hide from our past, but to embrace it with a commitment to build upon our values of inclusiveness and equity for everyone who calls this state home,” the governor said.

Some tribal leaders voiced concerns about including non-federally recognized tribes in decisions regarding the $100 million, asking state leaders to ensure that all tribes have a say. Other leaders noted concern about competing land claims among tribes, saying that the funding will be helpful as long as there are clarified boundaries between communities.

“I know that there are multiple tribes claiming overlapping land, and so we kind of need to think about that when we’re putting out these types of policies,” Councilmember Kouslaa Kessler-Mata said Friday.

State officials aim to address these issues with legislative leaders over the next three months to work the proposal into the upcoming budget.

Officials also discussed Newsom’s goal to conserve 30% of the state by 2030, meaning that the “conserved” land would be protected from development that interrupts the “natural function” of land and water. The goal is part of a global movement known as “30 by 30,” which several countries have joined and committed to conserving 30% of their land as protected area by the end of the decade.

Around 6 million acres – equivalent to 24% of the land – are conserved and 16% of coastal waters. State officials said Friday that they hope to conserve the 6 million acres in a way that “expands access for California to be outdoors,” particularly in communities that don’t have as much access.