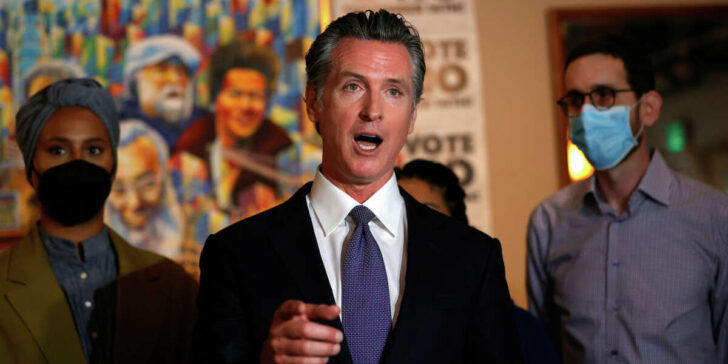 Gov. Gavin Newsom and legislative leaders made a commitment Wednesday to expediently advance over a dozen bills addressing gun violence in the aftermath of Tuesday’s massacre at an elementary school in Texas.

The governor, alongside Assembly Speaker Anthony Rendon, D-Lakewood, and Senate President Pro Tempore Toni Atkins, D-San Diego, vowed to take quick action to advance several measures addressing gun violence moving through the Legislature. Newsom expressed interest in adding an urgency clause to the existing measures, which would allow the bills to take effect right after they are signed.

“We’re here resolved, focused energetically on moving well over a dozen bills forward, getting them to my desk where I will enthusiastically be signing these bills by the end of next month,” Newsom said during a news conference Wednesday.

The shock of Tuesday’s shooting that killed 19 students and two teachers after a gunman entered an elementary school in Uvalde, Texas, has renewed calls nationwide for stricter gun laws.

“We’re here because we have gotten to the point where we can’t live our lives without trepidation that every time we step outside, we may never see our families again,” Atkins said Wednesday. “This may feel like a point of no return, but it’s not… We have to turn it around before another neighbor, mother, teacher, or child is senselessly ripped from our world.”

California already has some of the strictest gun laws in the nation, however, lawmakers have brought forth several new proposals this year that aim to further reduce violence. These proposals include a measure that limits firearm marketing to minors and another that would allow legal action against gun makers and dealers who are “irresponsible, reckless, and negligent in the sale or marketing of their products.”

One law, which advanced in the Senate Tuesday as reports of the Texas school shooting began circulating, creates a private right of action for residents to sue  anyone who manufactures, distributes, transports or imports assault weapons or unserialized firearms and kits – better known as “ghost guns” and “ghost gun kits.”

The bill is backed by Newsom and is modeled after a Texas law that bans most abortions after six weeks and allows citizens to sue providers. Under the law, individuals could be awarded $10,000 per weapon on top of attorneys fees.

Another proposal lawmakers are hoping to fast track is Senate Bill 906, which would require school officials to immediately report any perceived threat of an “incident of mass casualties” at a school. That measure was also advanced by Senate lawmakers on Tuesday.

“First, can you take a moment to mourn with these families and find out what actually happened,” Gallagher tweeted. “Blaming Republicans or Democrats hyping up ‘Us vs. Them’ mentality is not helping anyone and it’s certainly not getting us to a solution to violence.”

“We need to address these issues head on,” he added. “Stop the political posturing and let’s come together to address the underlying causes of this violence.”

Shortly after news of the shooting broke on Tuesday, Newsom blasted Republicans on Twitter for refusing to support stricter gun laws, writing “Another shooting. And the GOP won’t do a damn thing about it.”

Lawmakers have engaged in several marathon floor sessions this week ahead of Friday’s looming deadline to advance bills out of their house of origin. Bills that pass – including several pieces of gun legislation – must work through the legislative process in the opposite chamber before they can be advanced to Newsom’s desk.