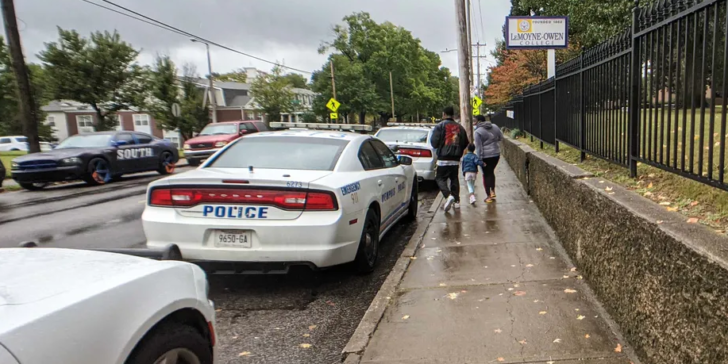 A shooting in the stairwell of a Memphis school Thursday morning left a 13-year-old boy hospitalized in critical condition, a fellow student in custody, and a community grasping to process a violent outburst in a school year already beset by challenges.

The scene that played out near Cummings Elementary School in South Memphis has become sadly familiar across the U.S.: sirens and flashing blue lights, school staff escorting students to safety, and parents rushing to meet their children and asking questions about what happened.

Shelby County Schools Superintendent Joris Ray said at a Thursday afternoon news conference that the injured student is expected to make a full recovery. The suspect is a 13-year-old male student at the school who was expected to be charged with attempted first-degree murder, assistant chief of police Don Crowe said. Neither student was identified.

“My heart aches for our children,” Shelby County Schools Superintendent Joris Ray, who visited the injured boy and his family at Le Bonheur Children’s Hospital, said at a press conference. “Gun violence has no place in our schools or communities. Literacy is life, not guns.”

The shooting took place at a difficult time, with educators and students back in school buildings trying to bounce back from a year-and-a-half of pandemic-disrupted learning, high pediatric COVID-19 rates in Shelby County, and a recent uptick in gun violence.

It also took place in a school once called an academic “jewel” by the district for fostering community support in South Memphis. The math-focused school boasts robotics and coding programs. Cummings serves 395 students in kindergarten through eighth grade.

Police dispatchers received a call at 9:15 a.m. from inside the school that a student had been shot, Crowe said. A school resource officer at the school placed the call and administered aid to the injured boy, as did a school nurse who calmed the victim and called his father, who was 3 minutes away, district officials said. Memphis police arrived within two minutes, Crowe said.

Crowe said video evidence indicated the shooter was another student, who was seen fleeing in a vehicle. While a police tactical unit and federal agents conducted another sweep of the school after students had been moved to a nearby church, the suspect turned himself in at a police precinct, he said. Crowe said police “have a real good idea” of a motive but declined to elaborate or provide additional details about the circumstances of the shooting.

Shortly after 9 a.m., when gunfire broke out at Cummings, a tense scene unfolded as the school’s active shooter protocol kicked in. Both police and school officials emphasized that they were prepared for such a situation, and said the emergency plan was executed well on Thursday. Earlier this month, the district had conducted active shooter training and all schools had turned in their own emergency response plans, officials said.

A school leader said at Thursday’s news conference that students and staff had been screened by metal detectors that morning. Neither she nor police officials commented on how a gun could have made it inside the school.

Tennessee took steps to bolster school security after a 2018 shooting that killed 17 people at a high school in Parkland, Florida. Then-Gov. Bill Haslam ordered a comprehensive security review of more than 1,800 public schools across Tennessee. The state also provided districts with $35 million in safety grants, mostly to improve their aging school buildings with upgrades like modern security cameras, beefed up front entrances, and repaired or new locks.

After gunfire erupted Thursday, Cummings Elementary went into lockdown. Anxious students lined up as they would for a fire drill and were ushered outside, and school officials dispatched buses to take the students to Metropolitan Baptist Church down the street. There, anxious relatives huddled under umbrellas on a rainy, overcast morning.

Parent Rashard Humphrey, who lives near the school and promptly picked up her son from the church, heard sirens before rushing to the scene. She initially thought that they were headed to a nearby hospital because the school is near the city’s Medical District.

“When I kept hearing sirens, I said, no, let me look out, and when I looked out, there was a sea of blue but nobody could tell me anything,” she said.

Humphrey said she called the school and tried to get answers. She said her son texted her to tell her that the school was on lockdown and that she didn’t receive a message from the district until more than an hour later.

“That’s not putting anybody at ease,” she said, adding that some parents weren’t able to rush to the scene and were unsure if their child had been hurt.

Chantel Douglass waited across the street from the church as relatives retrieved her seven-year-old niece. She said her mind went blank after she got the call that there had been a school shooting.

“Some parents found out through Facebook. And that’s terrible,” she said.

She hadn’t heard from her niece since news of the shooting broke, and at the first sighting of the little girl walking down the sidewalk with her parents, Douglass lit up and rushed over.

“Here she comes,” she said, as the little girl’s parents, aunt, and grandmother all greeted and hugged the seven-year-old.

As students were dismissed from the church, some parents complained about what they considered to be the slow process of reuniting children and families. District spokesperson Jerica Phillips said that the district had to take precautions, double-checking the information management software PowerSchool to ensure that students were released to the right people.

“A lot of parents are frustrated about us doing it one at a time, but we’ve got to check PowerSchool because you have custody issues and you can’t just release students to anybody. That becomes another story,” Phillips said.

District officials said classes will be back in session at Cummings on Friday, and the superintendent emphasized the importance of supporting students emotionally as they heal and refocus on academics.

This article was originally posted on ‘My heart aches for our children.’ Memphis student hospitalized, another student in custody after school shooting