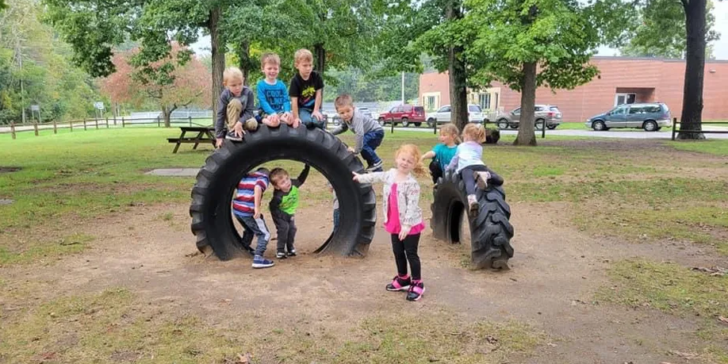 When Sarah Nordin arrived to drop off her 3-year-old son for his first day of preschool in 2018, she was handed an unexpected notice: The child care center was planning to close its doors in two weeks due to a staffing issue.

It had already been Nordin’s second choice after the family’s first beloved in-home day care had closed only a few months prior. Now she would need to find a third option in her tiny northeastern Indiana town.

“I thought I was going to have to quit my job,” Nordin said. “I was calling family members, sobbing, ‘I don’t know what to do.’”

The stress of finding child care is familiar for working families across the country, but it can be especially acute in rural areas like Kosciusko County, where sparse populations make early learning programs costly to operate and few and far between.

Known as the Orthopedic Capital of the World for its medical manufacturing industry, Kosciusko County was around 2,000 seats short of its child care needs in 2018 after several programs closed, according to research by its chamber of commerce.

Parts of the community even earned the “child care desert” designation from Early Learning Indiana, a statewide advocate for early childhood education, meaning children outnumbered available seats 3 to 1 and the area had robust economy.

“We see this as an issue of economic development,” said Searles.

Community works together to add seats

The “child care desert” label eventually allowed the chamber to qualify for a $75,000 grant in 2020 from Early Learning Indiana, putting in motion an effort to add more seats through Wawasee schools in Syracuse, the smaller northern part of the county that suffered a particular child care scarcity.

Jennifer Phillips, the district’s director of special cervices, led the effort, inspired by her own experience.

As a new teacher in need of child care for her toddler daughter, Phillips had to drive 60 minutes round trip to drop her daughter off at a day care in the next town before starting her day teaching in Wawasee schools. At the time of her search, there were just eight licensed child care seats in town.

Families throughout the area shared similar stories to Phillips’: They would leave their children with neighbors, or ask relatives to watch them until the school bus came, or work fewer hours in order to be home a little earlier. During the pandemic, one parent would have to stop working outside the home, she said.

The district opened its first programs in 2020, one for the public and another reserved for the children of Wawasee schools staff — though not Phillips’ daughter, who by then had started kindergarten.

“I knew the importance of child care for children of our employees and for the community as a whole,” Phillips said.

Wawasee Community Schools now offers preschool for 3- to 5-year-olds at all three elementary buildings, an early-hours room for the children of employees of a large local manufacturer, and an infant and toddler care program that few other districts have ventured into, for a total of 96 additional seats.

Because the programs operate within a public school, they can accept aid such as the governmental Child Care and Development Fund and vouchers, Phillips said. Each program is led by a teacher and a paraprofessional, and all but one has a waitlist this year, Phillips added.

The district’s 16-seat infant and toddler care programs are in the process of obtaining licensure, she said, but for now have to close for one day after every ninth day of operation. Still, those, too, have waitlists.

A local employer steps up

In August, a major local employer also jumped into the day care scene.

Ryan Zimmerman, Polywood’s director of human resources, said the company had been weighing options after employees routinely struggled to find child care nearby.

“We’re a rapidly growing company, and many times we’ve come across individuals we wanted to hire or had hired but who then had child care issues,” Zimmerman said. “They had a family member or neighbor watching their kids, and then something happens and that person isn’t available, or gets a job. And then they have a dilemma.”

The company had previously considered offering a program of its own, but faced the challenges of space, overhead, and utilities, as well as providing quality early learning.

“We’re a manufacturing company. We’re not in the day care business,” Zimmerman said.

“With a school, they’re the experts in child care, in how to manage children.”

Wawasee’s Polywood classroom offers care beginning at 4:30 a.m. ahead of the manufacturing plant’s start time — nontraditional hours that are even harder to find among child care providers. The company pays $40 per seat per day, which subsidizes the cost to employees.

The company believes it’ll see a higher retention rate as a result of the program, he said. For the 10 employees who currently use the child care center, Zimmerman also noted that absenteeism has been nonexistent.

If there’s a silver lining to the pandemic, it might be that more employers have realized the dire need for child care among their workers, said Early Learning Indiana CEO Maureen Weber, after school closures and COVID exposures impacted family schedules.

“I speak to rooms full of employers trying to figure out how to provide a meaningful support to their own employees as well as the larger community,” Weber said. “It became crystal clear that this is very important.”

And while Indiana school districts are increasingly offering preschool programs, it’s still rare that a district steps into infant and toddler care as Wawasee has, Weber said.

The model works well for infant care because it relies on the trust that public schools have within a community, as well as their existing resources, Weber said. The cost of operating the programs is one of the largest barriers to expanding access to them, and goes double for rural areas with less concentrated populations.

“They can, at the same time, be too costly for families to afford care and not charge enough to fund the full cost of care,” Weber said. “That creates quite a conundrum.”

Early Learning Indiana gave Kosciusko County an overall score of 51.6 out of 100 in an August report on early learning access in the state of Indiana, a score influenced by the county’s low child care capacity and lack of choice.

The report, which uses some data from before Wawasee schools’ child care programs opened and expanded, specifically lists the areas served by the district as ones of lowest access.

‘It’s hard leaving your baby with someone’

Sarah Nordin, who faced a child care dilemma after her two providers closed, found care for her children with family until the day care at Syracuse Elementary opened.

“Knowing I have good child care makes me do a much better job,” said Nordin, who works for the district as a special education paraprofessional.

Before Wawasee’s programs opened, kindergarten teacher Shanelle Werstler also relied on family for child care, including her mother-in-law who retired when the family couldn’t find another day care provider. Some quoted an insurmountable cost, Werstler said, or a waitlist of nearly two years.

Werstler said she jumped at the chance to bring her children to Syracuse Elementary’s day care for one of the most affordable rates around — $25 a day. Her daughter loves going to the “big school,” Werstler said, where she’s learned to write the first letters of her name.

The need to develop academic and social skills also drove parent Nicole Rodriguez to seek out preschool for her son, who struggled in social situations. The program allows her to focus on her full-time remote work, with the option to reach her son’s teacher by text if needed.

“It’s reassuring that if anything happens, I’ll get a call right away,” Rodriguez said. “And it’s a relief to have all that time to be able to work, without having to go get him.”

Wawasee High School teacher Hannah Pawlicki also couldn’t find another nearby child care option — some provided only part-time care, which worked well for other families she knew, but wouldn’t work for her and her husband, also a teacher.

“It’s hard leaving your baby with someone,” Pawlicki said. “Having both kids in the building, on the same schedule — we feel really fortunate that we had this opportunity in our community.”