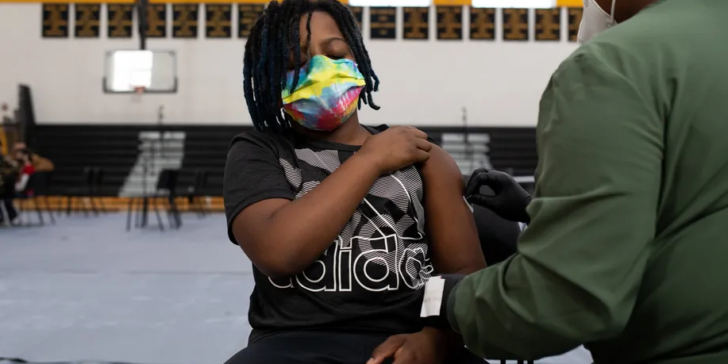 Schools with high vaccine demand among 5- to 11-year-old students will get another chance to issue first doses this week, Mayor Bill de Blasio said Tuesday.

And, in a reversal, all schools serving students in that age group will begin offering second doses beginning Nov. 30 instead of requiring families to visit neighborhood clinics or doctor’s offices to receive a second shot.

The city’s school-based vaccine program initially offered every campus serving students ages 5-11 access to a one-day vaccine clinic over the past week. But as some sites saw high demand with lines around the block and short supply, officials said certain schools would get another chance to issue first doses on Wednesday and Thursday.

About 60 schools are participating, including several campuses in Manhattan, Brooklyn, and Queens but just one on Staten Island and three in the Bronx.

Although city officials initially said families would have to schedule second doses at sites outside their schools, de Blasio said Tuesday that every school serving students ages 5-11 will have access to second doses on their campuses over the course of 10 days beginning Nov. 30. Students who have still not yet received a first dose by then will be allowed to receive shots on those days as well.

“We’re glad to see that charter schools in private space are now included in the program — frankly, they should have been from the start,” said James Merriman, CEO of the New York City Charter School Center. “We hope we’ll be automatically included when they announce a second shot.”

Overall, city officials said 72,000 5- to 11-year-olds have been vaccinated, or roughly 11% of people in that age group citywide. About 26,300 of those shots were delivered at school-based sites, de Blasio said. Vaccines have been available to younger children for a little over a week.

Children who get their jabs at school-based vaccine sites or other city-run sites are eligible for an incentive of $100.