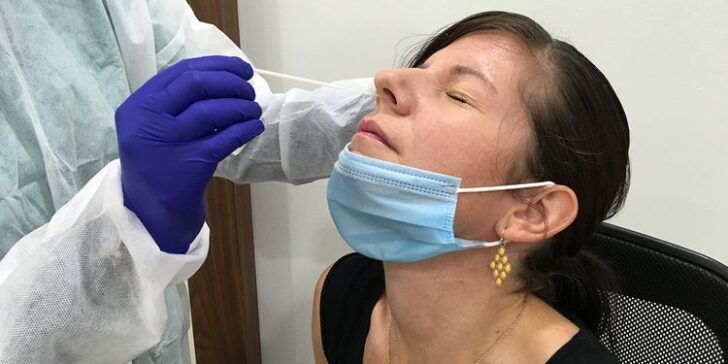 The effectiveness of New York City’s school-based COVID testing program came under scrutiny on Wednesday when education department officials for the first time disclosed the number of students who consented to participate: just over a third of those who are eligible.

In total, 192,705 students have submitted consent for the random testing program, First Deputy Chancellor Donald Conyers said at a city council hearing. About 550,000 students are eligible for testing, according to department officials.

“These are not very reassuring numbers,” Brooklyn City Council member and education committee chair Mark Treyger said in response to the figures during the hearing.

The city’s current protocol calls for 10% of unvaccinated students to be tested every week in grades 1-12, as preschool and kindergarten students are excluded from the program. There is no penalty for failing to submit the forms, and students who don’t return them are not supposed to be tested.

The lack of consent for most students could weaken the city’s testing strategy, some public health experts said, though others were less worried. Last school year, when consent for testing was mandatory for students who attended school in person, officials also struggled to collect consent forms. (Roughly 40% of children returned to buildings by the end of last year.)

Conyers said the education department is trying to quickly boost the numbers of students who consent to testing. Families submitted 20,000 consent forms in the past week, officials said.

“We are every day encouraging parents and students to step up,” Conyers said. “Where we are finding resistance, we’ll continue to push.”

The city’s current testing program is not large or frequent enough to prevent individual infections, experts said. It is generally meant to detect wider coronavirus outbreaks in schools and measure whether the city’s virus prevention efforts — such as mask-wearing, social distancing, a vaccine mandate for staff, and ventilation — are working properly.

After the first week of school when the city loosened quarantine rules, officials also increased the frequency to weekly rather than every other week.

But low levels of consent could skew the testing results. For example, if those who don’t submit the forms correlate with other risk factors for contracting the coronavirus, such as not wearing a mask or living in a neighborhood with higher infection rates, the city may not be testing a truly random sample of unvaccinated students.

“It is very easy to imagine that the people who sign up to participate in a routine testing program are likely different in terms of their COVID attitudes and behaviors than those who do not sign up,” said Ben Linas, an epidemiologist at Boston University.

Linas suggested that with such a small and potentially skewed sample, it might be more effective to scrap the testing program entirely and redirect resources to other strategies, such as finding additional space for schools that are cramming students into full-capacity classrooms.

Other public health experts said that even with low levels of consent, the testing program could still yield valuable information.

But if there are schools or classrooms where few students have returned consent forms and aren’t being tested “that could create blind spots where outbreaks could go undetected, or layers of protection could break down without anyone knowing,” Bershteyn added.

It’s unclear how many schools have significant numbers of students who have not given consent for testing, but there are some instances where zero students were tested during some random on-site testing sessions, according to public data.

At P.S. 194 in Brooklyn, 38 school employees and zero students were tested during the school’s first wave of random coronavirus testing on Sept. 13, the first day of school. In two subsequent random testing visits over 30 students were tested, city data show. Seven staff members at the school have tested positive so far this school year.

A staffer, who spoke on condition of anonymity for fear of retaliation, said the school was reluctant to test students because the only consent they had on file was from the previous school year. Even though last year’s consent was still valid through Sept. 30, there was some unease about swabbing students on their very first day back in the building.

City officials did not answer questions about how many schools could not test at least 10% of their unvaccinated students because of consent issues.

Nathaniel Styer, an education department spokesperson, defended the city’s testing protocols even though most eligible students have not consented to it.

“Our level of testing is working and with 100% of in-person staff vaccinated, our schools are among some of the safest places to be in the city,” Styer said. “The city encourages every parent of an unvaccinated student to submit consent forms and help continue to keep our schools safe and open.”

Styer said parents can submit paper consent forms or can fill out a digital version through their student’s NYCSA account.