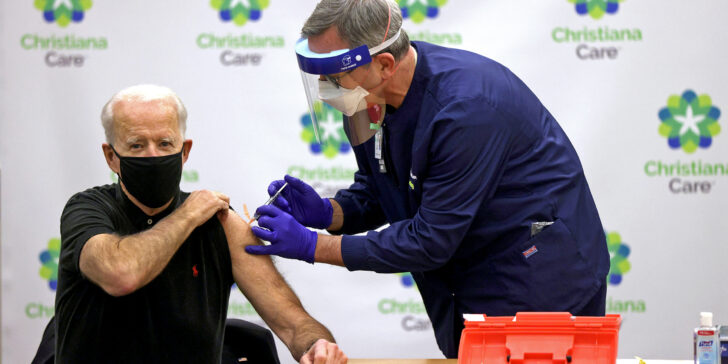 President Joe Biden is struggling to win in court as well as the court of public opinion when it comes to his response to COVID-19.

Biden’s approval rating on his handling of the pandemic has steadily dropped as he has issued more vaccine mandates, with one of those mandates seemingly dead in the water.

A Washington Post-ABC News poll released Monday showed that Americans have lost enthusiasm for Biden’s COVID-19 response. The poll found that only 47% of Americans approve of Biden’s handling of the pandemic while 49% disapprove. That’s a change from 62% approval and 31% disapproval in the summer.

Different polls have shown a little more than half of Americans support the vaccine mandate, though that number has dropped in recent weeks.

That Post/ABC poll was released after the Fifth U.S. Circuit Court of Appeals in New Orleans for a second consecutive week ordered the Biden administration to halt implementation of a vaccine mandate on private companies with more than 99 employees. Biden had set a Jan. 4 deadline for the mandate before the court stepped in, leaving many businesses wondering how to move forward.

“At least 26 states and multiple business groups and labor unions are challenging the ETS in nearly every federal appellate court in the nation,” the National Association of Convenience Stores said after the court ruling. “The court notes that OSHA has issued just 10 ETSs in its 50-year history. Six were challenged in court, and only one survived a legal challenge. “

The Job Creators Network filed a lawsuit against Biden’s mandate, calling it an “overreach of the executive’s authority.” They argued Biden knew the mandate would be overturned but wanted to use it to speed up vaccinations nationwide.

“The Biden Administration’s vaccine mandate is clearly illegal and will have a devastating impact on our small business community and our entire economy,” said Alfredo Ortiz, JCN President and CEO. “Even if OSHA did have the power, there is neither the grave danger nor necessity to issue such a sweeping regulation.”

The U.S. Chamber of Commerce had previously told businesses to enforce the mandate until the courts decide otherwise.

“Businesses that don’t comply with the requirements could face fines in excess of $13,000 per violation,” the group warned before the court’s ruling. “These fines are scheduled to increase to $70,000 as part of the Build Back Better budget reconciliation package.”

Now, those businesses have a reprieve.

“Rather than a delicately handled scalpel, the Mandate is a one-size-fits-all sledgehammer that makes hardly any attempt to account for differences in workplaces (and workers) that have more than a little bearing on workers’ varying degrees of susceptibility to the supposedly ‘grave danger’ the Mandate purports to address,” the court said.

A group of Navy SEALs have filed suit against the Biden administration, alleging the administration is improperly rejecting their religious exemptions.

“We are thrilled that the Fifth Circuit has stopped this mandate for now,” said Kelly Shackelford, President, CEO, and Chief Counsel for First Liberty Institute, the group representing the SEALs. “We remain dedicated to ending it permanently. The President is supposed to protect people of faith, not conscript private employers into his ideological war.”

Now, the vaccine mandate issue may end up at the U.S. Supreme Court. Biden’s eviction moratorium faced similar legal challenges earlier this year and was overturned by the Supreme Court, which ruled the president did not have the authority to issue such a sweeping mandate without Congressional approval.

“If I had a company with 100+ employees, I wouldn’t waste a dime or alienate any employees by beginning to implement a mandate that’s [dead on arrival]!” U.S> Rep. Thomas Massie, R-Ky., who has been an outspoken critic of the mandates, said on Twitter. “Biden’s vaccine mandate will not survive legal challenges in the courts. If it makes it to the Supreme Court, it will die there.”