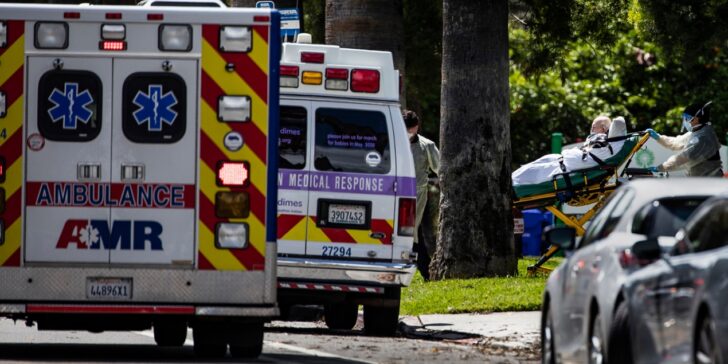 About 1 in 8 Californians who have died of covid lived in a nursing home.

They were among the state’s most frail residents: nearly 9,400 mothers, fathers, grandparents, aunts and uncles whom Californians entrusted to a nursing home’s care. An additional 56,275 confirmed covid cases among nursing home residents weren’t fatal.

“The number of covid infections and deaths that happened in skilled nursing facilities in California is truly appalling,” Jim Wood, a Democrat who chairs the state Assembly Health Committee, said at a recent hearing he convened on nursing homes. “I expect better from us.”

Covid-19’s unrelenting spread exposed deep, systemic problems with the quality of care — or lack thereof — at nursing homes across the country. In the nation’s most populous state, the industry’s track record during the pandemic is spurring leaders to radically rethink how it pays and oversees them.

Gov. Gavin Newsom’s administration is drafting a proposal to tie state funding more directly to performance: Among the state’s roughly 1,200 skilled nursing facilities, those that meet new quality standards would get a larger share of state funding than those that don’t.

But exactly how the Golden State would measure quality care and allocate the roughly $5.45 billion a year that nursing homes collectively receive is far from settled — and promises to spark one of 2022’s biggest health care fights. When the legislature debates those details as part of state budget negotiations, the nursing home industry vows to oppose any proposal tying Medicaid payments to quality metrics such as staffing levels, pay and turnover.

In fact, the industry plans to argue it needs more money to deliver better results — and it wields substantial power in the Capitol.

In the past decade, it has spent at least $10 million to influence lawmakers and has given one or more political donations to Newsom and at least 105 current members of the 120-member legislature, according to a KHN analysis of campaign finance records.

But patient advocates and family members who lost loved ones in nursing facilities during the pandemic are mobilizing a counterattack to convince lawmakers that now is the time to overhaul the system.

“There are a lot of problems people have complained about for a long time,” said Charlene Harrington, a professor emerita of social and behavioral sciences at the University of California-San Francisco and an expert on nursing homes. “This is an opportunity to correct those problems.”

At least 140,790 covid deaths have been reported in U.S. nursing homes, according to the latest data from the Centers for Disease Control and Prevention. Older adults have a heightened risk of dying of covid, and the coronavirus spreads more easily in institutional settings such as nursing homes and assisted living facilities.

That’s one reason Craig Cornett, CEO of the California Association of Health Facilities, thinks blaming nursing homes for high covid infection rates, especially early in the pandemic, is unfair. Not only are their residents naturally at higher risk than the rest of the public, he said, but the facilities were forced to accept hospital transfer patients who had not been tested for the virus, they couldn’t get adequate supplies of personal protective equipment, and they suffered as staff members got covid in the community and then brought it into work.

Cornett also pointed to federal statistics that show California has among the lowest nursing home covid death rates in the country and one of the highest staff vaccination rates.

But multiple studies in California and elsewhere have found that nursing homes with fewer nursing staff members experienced significantly higher covid infection and death rates. That devastating outcome is bolstering a two-decades-long argument by patient advocates that nursing homes must hire more workers.

“Some of these problems that we saw in the pandemic could have been avoided if nursing homes had adequate staffing,” said Harrington, who co-authored a December 2020 study for the California Health Care Foundation that showed nursing homes with lower staffing levels earlier that year had twice the covid case rates than those with higher staffing levels. (California Healthline is an editorially independent publication of the foundation.)

Currently, Medicaid reimburses a portion of what nursing homes spend on staff, administrative and other expenses, paying them a higher proportion for staff costs than administrative costs. Facilities can receive bonus payments for meeting quality standards — although the bonuses are limited and have been criticized for not boosting performance at facilities that need it most.

The California Department of Health Care Services, which administers the state’s Medicaid program, called Medi-Cal, is drafting a plan that would do away with the bonus payments and integrate quality measures into the daily Medi-Cal payment rates nursing homes receive. The department is considering multiple ways to measure quality, spokesperson Anthony Cava said in a statement: Nursing homes that offer more staff education and training could receive higher per diem rates, as could those that have more staff and less staff turnover.

That’s a non-starter for the nursing home industry, which doesn’t consider staffing to be an appropriate measure of how well residents do. Rather, Cornett, whose lobbying group represents more than 800 nursing homes, said facilities should be graded on the number of patient falls and infections, as well as patients’ abilities to perform daily activities.

“We want more staff and want to pay our staff,” Cornett said. “But we need the state to change the system so we can get more money into the staffing line. And that’s going to require a higher amount of money.”

Nursing homes warn that a heavy focus on staffing misses other critical costs of running a facility safely. Even under the current reimbursement system, they say, facilities are scraping by.

“Not all of the costs in a facility are for staff. Skilled nursing facilities, like other healthcare providers, have a variety of costs including medical supplies, consulting, real estate, taxes, administrative services, overhead and many others,” said Mark Johnson, an attorney for Brius Healthcare, one of the largest nursing chains in California.

Whether lawmakers will be sympathetic to the industry’s plea for more money is questionable. They are increasingly demanding transparency about how skilled nursing facilities make and spend their money. Like hospitals and other health care providers, nursing facilities have received billions of dollars in federal covid relief funding to help offset the costs of hiring temporary workers, testing and protective gear. It isn’t lost on lawmakers that this $12 billion industry is attracting a growing number of private investors who are buying ownership shares in their facilities.

“That tells me there’s money out there, there’s profit out there,” said Wood, who also sits on the budget subcommittee that will review the administration’s proposal. “Private equity is not going to go into facilities if they don’t have a chance to make a pretty significant return.”

There’s a lot at stake for the roughly 400,000 residents of nursing homes in the state — and for the industry, which is a big spender and a powerful force in Sacramento.

The California Association of Health Facilities has given just over $2 million in contributions and spent $5.67 million lobbying lawmakers in the past 10 years, from Jan. 1, 2011, through Sept. 30, 2021, according to records filed with the California secretary of state’s office. And Cornett, its CEO, is a veteran of the state Capitol who worked as the top budget aide to four former Assembly speakers and two Senate leaders.

During that time frame, 50 of California’s largest individual and corporate nursing home owners and operators have given a combined $2.6 million directly to lawmakers, the Republican and Democratic state political parties and ballot measures. That figure is likely an undercount because it is difficult to identify everyone with an ownership stake in a nursing home or chain. Facilities are often partially owned by real estate investors, venture capital firms and other business interests not listed on government records.

Cornett downplayed his industry’s influence and said trial lawyers are the players with deep pockets and are funding the patient advocates, an allegation those groups dispute.

But a 2018 report by the California State Auditor found that the three largest private operators — Brius Healthcare, Plum Healthcare Group and Longwood Management Corp. — are highly profitable. Their combined 2006 net income of $10 million grew to between $35 million and $54 million by 2015, the most recent year the state auditor analyzed.

“To some extent, the state is being bamboozled with this idea that the money that they’re paying now is not enough to do the job that we’ve asked them to do,” said Tony Chicotel, an attorney with California Advocates for Nursing Home Reform. “The bottom line is it goes to profit.”

This article was originally posted on After ‘Truly Appalling’ Death Toll in Nursing Homes, California Rethinks Their Funding