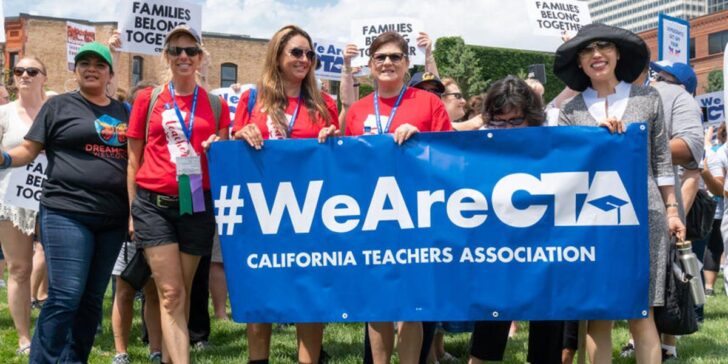 A California union has backed down after facing a potential legal action threatened by the National Right to Work Legal Defense Foundation on behalf of a former California charter school teacher.

A former Camino Nuevo Charter Academy teacher in Los Angeles, California, has received a refund for dues the union took from her paycheck while she was still employed after foundation staff attorneys sent a letter to Camino Nuevo Teachers Association (CNTA) officials threatening legal action for violating her First Amendment rights. She has since left her position to pursue further education.

CNTA is one of over 1,100 local affiliates of the California Teachers Association (CTA), representing 310,000 educators, counselors, librarians, and education support professionals in California public schools and community colleges.

Natalie Bahl, a Camino Nuevo Charter Academy teacher until recently, attempted to exercise her First Amendment rights to not have union dues taken out of her paycheck. She sent an email to several union officials, which reportedly led to other teachers making similar requests. Her request was made before the union-designated “window period” closed for teachers to revoke their authorization for deducting union dues.

Despite her timely request, Bahl realized a few months later that union dues were still being deducted from her paycheck. When she asked union officials about it, they claimed she missed her window period for dues revocation.

At that point, she reached out to NRWLDF staff attorneys, who sent a demand letter to CNTA stating that the union must refund the union dues it collected in violation of the landmark 2018 Supreme Court ruling in Janus v American Federation of State, County and Municipal Employees Council 31. Instead of facing a potential federal civil rights lawsuit, CNTA union officials refunded all dues taken from Bahl’s paychecks from the time of her request until she left her job to pursue further education.

The NRWLDF won Janus v. AFSCME before the U.S. Supreme Court in 2018. The court held that requiring public sector workers to pay union dues or fees as a condition of employment violates the First Amendment. It also held that public employees must opt-in with affirmative consent to any union payments before unions take any money out of their paycheck.

Since winning the 2018 Janus case, foundation staff attorneys have filed dozens of cases nationwide on behalf of public employees seeking to enforce their First Amendment rights under the Janus decision.

“Even when public employees comply with arbitrary and unilaterally imposed union policies designed to stifle their First Amendment rights, union officials brazenly ignore Janus in order to fill their coffers with union dues seized from unwilling employees,” National Right to Work Foundation President Mark Mix said. “Teachers and other public-sector workers have Janus rights under the First Amendment and should immediately contact the Foundation for free legal assistance if they believe their rights have been violated.”

Regardless of whether charter school teachers and employees are classified as public- or private-sector employees, in the non-right to work state of California, and in all states, they can’t legally be required to join a union, the NRWF notes.