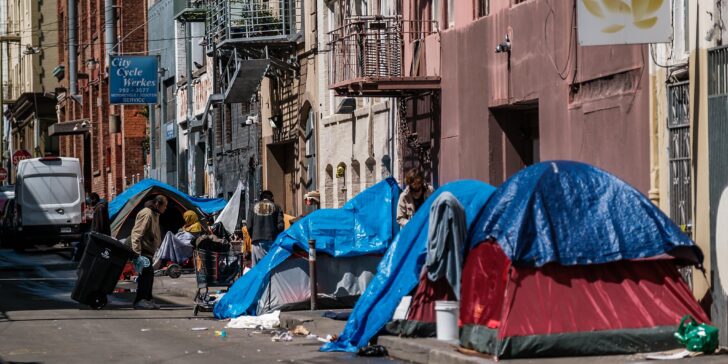 Mayors from California’s biggest cities are urging state leaders for annual infusions of tax dollars for homelessness programs in their metros, or they warn of a “fiscal cliff” that will reduce the services.

The mayors gathered in Sacramento Monday to highlight how flexible funding from the state’s Homeless Housing, Assistance and Prevention (HHAP) grant program has helped house more than 25,000 homeless individuals across the state. Officials also noted Monday that the funding had expanded California’s shelter capacity by 9,000 beds.

The HHAP funding, first announced at the end of 2019, provided grant opportunities to the state’s 13 large cities (population greater than 300,000), counties and continuum of care entities to support the homeless population. Applications for the third round of HHAP funding are due by the end of June, and a $1 billion block grant is available for disbursement.

Several mayors on Monday said a continuation of this “flexible funding” is crucial for cities to continue the momentum gained in the last few years to address homelessness. Officials are asking the governor and the Legislature to expand the funding and provide $1 billion a year for three more years through HHAP.

Sacramento Mayor Darrell Steinberg said Monday that HHAP has allowed his city to expand from having just a “couple hundred” shelter beds to 1,100. He noted, however, that a more permanent funding source and a collaboration between cities and counties are needed to continue to do this work.

“If this funding is cut off, we hit what one would call a fiscal cliff,” Steinberg said during a news conference Monday. “Cities don’t have the ongoing funding on the health and human services side to do this work, so HHAP is crucial for us not only to maintain what we have started, but to enhance it. Think about it for a moment – 9,000 new shelter beds is very impressive, and yet it is still a small percentage of the problem.”

Oakland Mayor Libby Schaaf, who leads the California Big City Mayors, warned Monday that without continued funding, “roughly two-thirds of our existing shelter systems and these innovations will fall off a fiscal cliff.”

Last year, Newsom invested $12 billion to address homelessness across the state and has proposed an additional $2 billion investment in his upcoming budget. Officials applauded the governor and the Legislature for this “unprecedented commitment” on Monday but said an extension of HHAP funds is important to maintain “momentum” into the future.

San Jose Mayor Sam Liccardo noted Monday that cities do face challenges when it comes to the cost of building housing, particularly in the Bay Area. He shared that it costs between $800,000 to $850,000 per unit to build a supportive apartment building for an unhoused resident, and the development time can take between four to five years.

With HHAP funding, however, cities were able to receive a CEQA waiver, which allowed cities to “move without a lot of red tape” when it came to building new housing, Liccardo said. This resulted in three separate “quick-build apartment housing communities” underway in five months instead of five years. The city received around $17 million in HHAP funding.